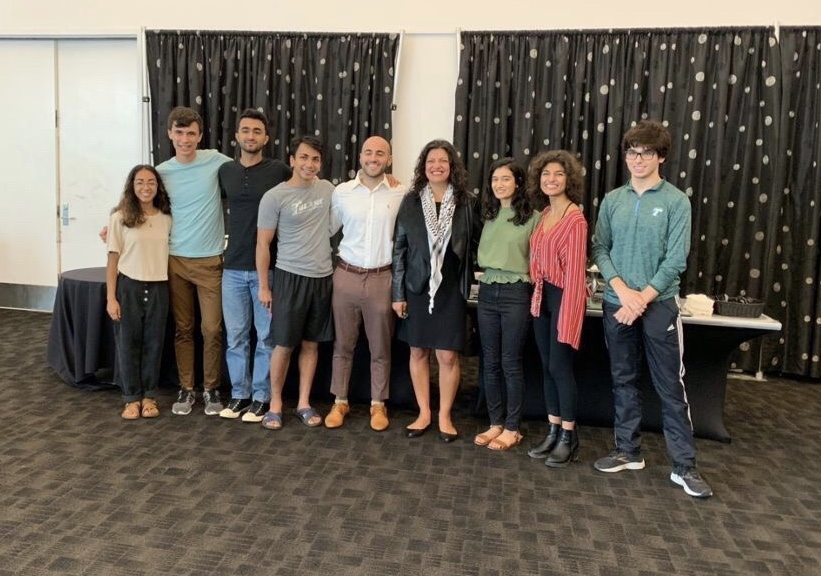 Before Congresswoman Rashida Tlaib took office in January, the depth of her heritage was already a source of inspiration. Before her first day on Capitol Hill, one of Tlaib’s Instagram posts prompted thousands of Palestinian women to share photos of their Palestinian-embroidered dresses with the hashtag #TweetYourThobe. Since then, the first Palestinian-American congresswoman has drawn on the histories of her family and her nation as she fiercely advocates for progressive policy on the House floor.

On Sunday, September 8, Congresswoman Tlaib brought that heritage to Tulane. This time, her history was draped over her shoulders as a koffiyeh, a symbol of Palestinian nationalism.

Before taking the stage to speak at the 2019 College Democrats Conference, Congresswoman Tlaib met with members of Tulane Muslim Students Association (MSA) and Tulane Students for Justice in Palestine (SJP). She smiled and rushed to grab her koffiyeh as students filed in and gasped with excitement.

“I always carry this with me for when I’m angry about something,” Tlaib said to a round of happy laughter. The room felt comfortable. It felt powerful. It felt like the Congresswoman could be someone else when she was with supporters who did not expect her to check Palestinian liberation at the door.

When speaking to the College Democrats, she focused on “outwork[ing] the hate.” Building on this theme, she touched on the TMobile/Sprint merger, progressive organizing, voting, Kashmir, Palestine, impeachment and Trump’s  “pay to play” administration. The U.S., Tlaib highlighted, places the profits of corporations over the needs of the people.

What are our votes in comparison to the Supreme Court’s infamous decision in Citizens United that opened the floodgates for corporate campaign contributions?

But vote we must. Tlaib was very clear on that.

She urged the audience to subscribe to humanism in their political beliefs. Apply humanism to Kashmir where people are dying because the Indian government has placed an entire region on lockdown. Apply humanism to Palestine where people are dying because of Zionist colonialism. But the Democratic Party, Tlaib’s party, has been and is complicit in these deaths.

Rep. Rashida Tlaib (D-MI) calls out Pelosi: “She is Speaker … she can ask for a meeting to sit down with us … acknowledge the fact that we are women of color … be aware of that and what you’re doing … because some of us are getting death threats”pic.twitter.com/ujGrfiSjFE

Philanthropists, orators and politicians that mimic their Republican counterparts have all passed through the ranks of the Democratic party. These archetypes bring in campaign donations, media support and successful elections. Yet the Democratic Party of today is leaning further to the left than some of its members seem capable of handling.

Congresswoman Rashida Talib, of Detroit, is attempting to embody the values of a political structure that cannot handle the truth of its faults. Her presence was refreshing within her party in contrast to people who support the genocide of Palestinians. But, what does her role look like as a Palestinian mother and a Democrat in a room of young College Democrats?

The better question is, if the Democratic Party supports her as she shares her experiences of struggle with young civically engaged students, do they see their party’s future as one that will dismantle white supremacy in Palestine? How can they claim to endorse Tlaib as a candidate without supporting the right to visit her own grandmother?

Rashida Tlaib shed tears as she explained why she will not be visiting her grandmother in Israeli-occupied Palestine under heightened restrictions pic.twitter.com/f3sHkhbABc

This not a bipartisan issue – white supremacy commodifies women of color’s fight for humanity strategically in order to build the illusion of racial inclusion. Congresswoman Tlaib may not consciously participate in this process, but the system in which she operates forces her hand, and has forced the hands of women of color that have occupied positions of power before her.

Her experiences in politics have been volatile. She advocates for marginalized people in an unapologetic manner, facing opposition from those who share her identities as well as those who do not but who align themselves with hegemony. This insidious behavior is maintained by many who aren’t Anti-Zionist Democrats.

Congresswoman Tlaib advocates for the end of US imperialism and the end of state-sanctioned genocide against the Palestinian people. This is paradoxical, since she operates as an official representative of the same government that is complicit in this violence. She cannot operate alone. The United States must deconstruct white supremacy, both domestically and internationally, so that young women of color in future generations can determine for themselves what their freedom will look like.