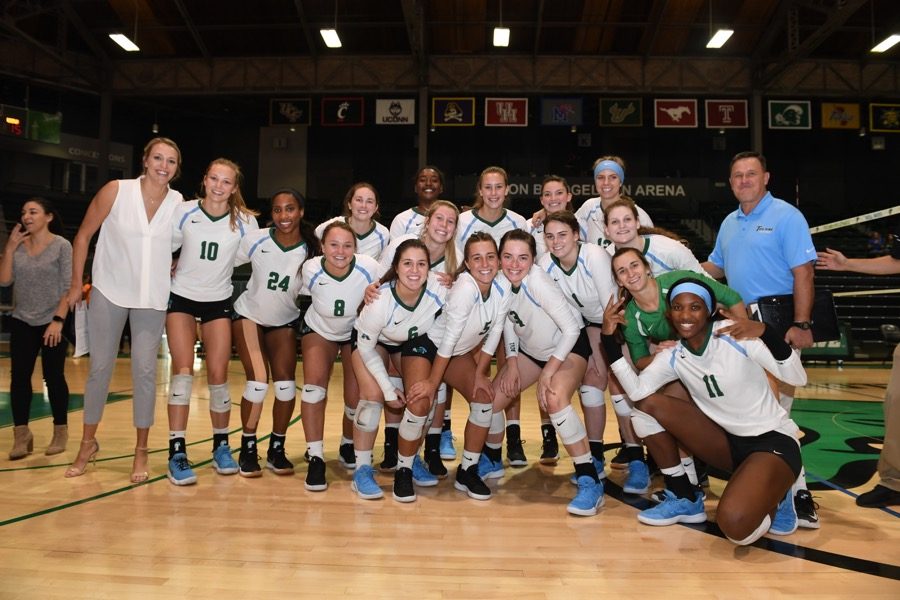 The 2018 women’s volleyball team poses after a win. Although the team has lost a few key players, stars like junior Kaylie McHugh, who broke a school record this past weekend, remain.

The Tulane women’s volleyball team has gotten off to a great start this season, holding an 8-3 record thus far. After winning all three of its matches at the Doubletree Classic and two of its three games at the Allstate Sugar Bowl Collegiate Volleyball Classic, the Green Wave rolled into the 2019 Holiday Inn Universal Plaza Invitational where the team took on three tough teams.

In its first game, Tulane squared off against the Ohio State Buckeyes, defeating them 3 sets to 1. During the match, the team had 50 collective kills, and three players reached a double-figure kill count. Junior Lexi Douglas recorded her third double-double in three games, leading her team to victory against the Buckeyes. 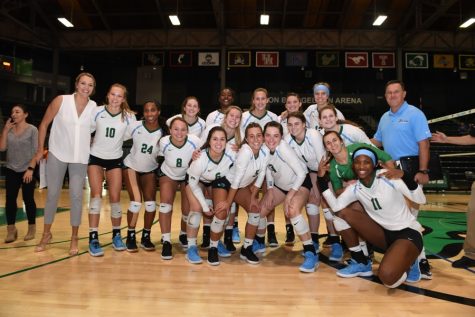 Courtesy of Parker Waters and Tulane AthleticsThe 2018 women’s volleyball team poses after a win. Although the team has lost a few key players, stars like junior Kaylie McHugh, who broke a school record this past weekend, remain.

The Green Wave next battled the Bowling Green Falcons. Senior Kaylie McHugh came into the game needing only 17 digs to pass the all-time school record. She broke the record in the closing points of the match, passing Jenn Miller who had an astounding 1,987 digs from 2006-09. McHugh’s record-breaking performance seemed to turn the tide for the Green Wave, as Tulane was able to take down Bowling Green 3 sets to 1.

In the second game of the doubleheader, Tulane squared off against the Western Kentucky University Hilltoppers. Although the Green Wave put up a valiant effort, it was ultimately not enough. WKU won the match 3 to 1 in Tulane’s last match of tournament play.

The Green Wave was held to a mere .120 hitting percentage and only 40 kills in the match. Efforts from Makala Heidenberg, recording her second double-double for the day, and Kayla Dinkins, who led the team with four blocks, were not enough to overcome the stellar play from the Hilltoppers.

Tulane more than made up for this lapse in energy, however, beating the University of Southern Mississippi 3-1. McHugh dominated once again, posting 20 digs, while junior Jenna Ibeita set up the team for success with 21 assists.

The women’s volleyball team will travel to Baton Rouge this Saturday, taking on LSU at 2 p.m. To close out this month, the team will play the University of Memphis on Friday, Sept. 27, at 7 p.m. and Southern Methodist University on Sunday, Sept. 29, at 2 p.m., both at Avron B. Fogelman Arena in Devlin Fieldhouse.