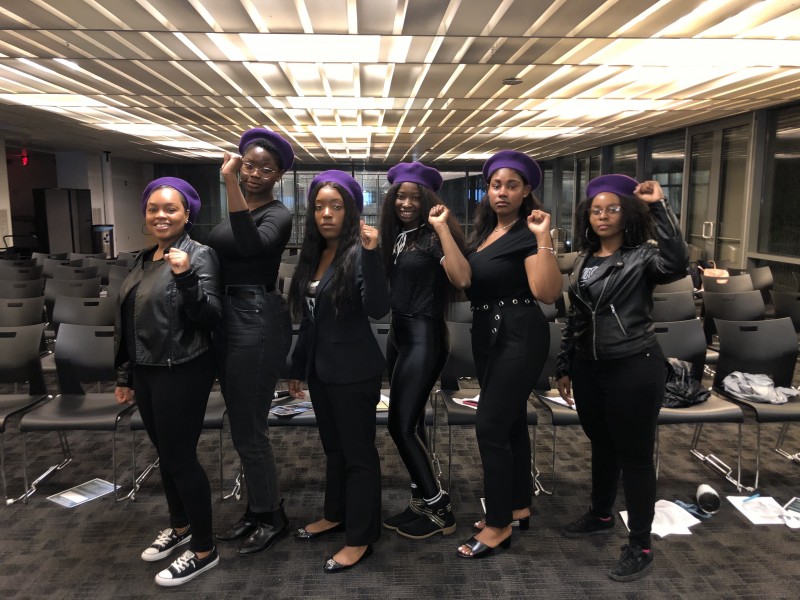 We center Black students because we have experienced much pain on Tulane’s campus through the systemic, oppressive laws and horrific past of this institution. We are students who go to a school that was built on stolen indigenous land and cultivated by enslaved Black people.

We stand on their shoulders and the generations of Black people who came after them. We honor them every day. We are proud to be a part of this group and the history of Black activism on Tulane’s campus and beyond. We started with a dream, and we brought that dream to Senate, and now we are bringing it to the world.

Les Griots Violets, a student coalition, is calling for Tulane to institute an equity fee — an increase in tuition that would allocate more resources to marginalized students.

Last night, USG voted in favor of the fee.https://t.co/hLhAvQikFA

We urge our fellow Tulanians to remember our motto — “Not for one’s self, but for one’s own” — as we continue to talk about anti-racist work. This is our story. And yours.

The most recent endeavor that we have pursued has been to address the shameful lack of resources and support for marginalized students — students of color, students with disabilities, queer students, transgender students, students of lower socioeconomic status, etc.

Every one of the aforementioned groups relies heavily on campus centers like the Carolyn Barber-Pierre Center for Intercultural Life, the Center for Academic Equity, the Office of Multicultural Affairs, the Office of Gender and Sexual Diversity and the Goldman Center for Accessibility to both find identity-based community on campus as well as to meet their needs in terms of support. These entities, as currently managed, are funded by endowments and donations, which are not sustainable.

When those funds run out, so does the support for these groups, who are arguably the most in need on this campus. The Equity Fee is a piece of legislation written up by Les Griots Violets designed to address this negligence of support on campus.

Tulane celebrates its diversity and, as an institution, has been making efforts to increase diversity on campus. An important part, however, has been long neglected — inclusivity. Inclusion does not just mean bringing these students to campus — it means intentionally addressing the problem’s roots and participation in systematic racism and oppression.

The $240 fee would go in part to all of these services on campus and directly supplement their current budgets, allowing for a larger breadth of students to be helped. The rest of the money would be allocated to an endowment as well as a “Close the Gap” fund for juniors and seniors.

The endowment would be distributed directly to students in need through grants to fund students of lower socioeconomic background, which will allow them to attend Tulane and have the same access and a comparable Tulane experience as those who may not be struggling to pay tuition and fees.

The “Close the Gap” fund acknowledges that first- and second-year students are prioritized when it comes to financial aid (such that they receive more financial support), so this fund focuses on juniors and seniors. This fund makes it possible for these students to graduate, particularly those who started at Tulane with a package that meets their needs but now have only $1,000 – $5,000 left to pay.

This specifically can help with families that may not be able to afford private loans. The fund will directly support such students and allow them to complete their term.

This legislation has passed in Tulane’s Undergraduate Student Government and will continue to be seen by The Graduate and Professional Student Association (GAPSA) and University Senate. Les Griots Violets will be meeting with President Mike Fitts and representatives of the President’s Office to discuss the implementation of the legislation and are excited to see Tulane change for the better as a result of it.

Once again, Tulane’s motto is non sibi sed suis: “Not for oneself, but for one’s own.” This Equity Fee is a call to action for the students and administration at Tulane. Our motto is reflected in this legislation, and we must follow through with it.

It is the culmination of months of effort by some of the most ostracized, yet active, members of Tulane’s community. We are so grateful for all the support we have gotten so far and continue to receive.

When this legislation is implemented on our campus, we will be making history as one of the first universities in the world ever to successfully and effectively implement such a fee and endowment to support those most in need in higher education.

The work doesn’t end here, however. Les Griots Violets will continue to be active in advocating for those in need. This is for Huey and Angela. Thank you.