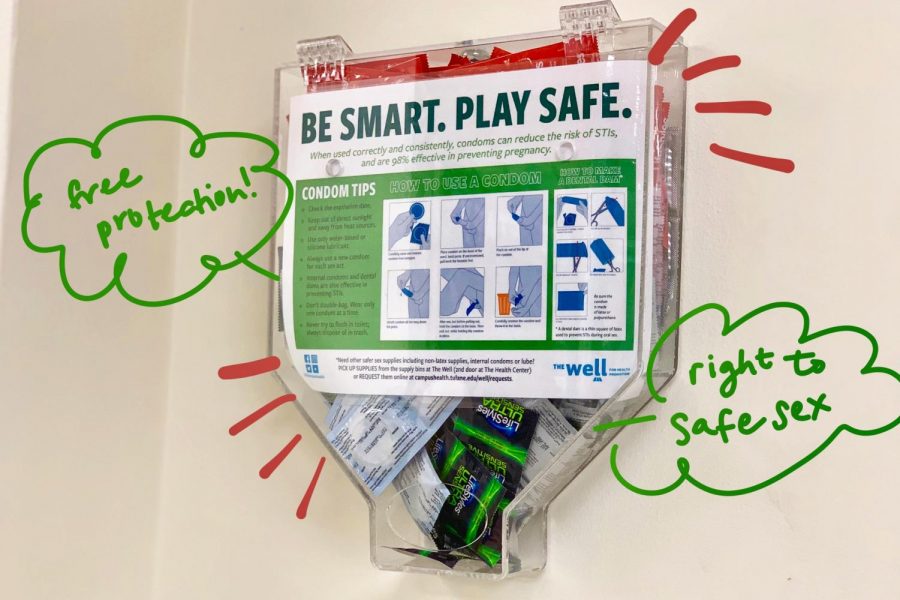 Students passionate about reproductive justice and sexual health, looking to extend their activism off-campus, need look no further than our next door neighbor. The culture surrounding sexual health at Loyola University is deserving of our attention.

Despite the fact that Loyola University and Tulane University share adjacent plots of land, the relationship between the two universities does not reflect this close proximity. The majority of interactions consist of eating at each others’ dining halls and swiping on Tinder.

However, this apathy is remiss; Loyola’s issues not only have a direct effect on Tulane’s student body, but also are important to those who seek to promote progressive perspectives. Loyola is a Jesuit university, but in its pursuit to uphold Catholic values, there are unintended consequences that negatively impact the student body, particularly in the area of sexual health.

In comparison to The Well for Health Promotion, which gives free condoms and free STI testing to all Tulane students, Loyola bans the sale of condoms. Two Loyola students, Britton Hanson and Dylan Ritter, sought to change this by creating a petition that garnered over 1,152 signatures, which is just under fifty percent of the student body.

Tulane has ample resources for sexual health. From free safer sex supplies to workshops on sexual health to LGBTQ+ specific resources, Tulane is well-equipped to help not only their student body, but extend their generosity further.

In spite of the high number of signatures, Loyola chose not to allow the sale of condoms on campus. This is not the first time Loyola has prioritized its Jesuit identity over the wishes of its students. In 2018, the executive director for student affairs at Loyola asked the Loyola College Democrats to disinvite a pro-choice speaker from one of their panels.

When Loyola tells you less than two days before your pro-choice panel that one of your speakers is “too extreme”. Glad to know that in some parts of the country believing in a woman’s right to choose is “too extreme” for a discussion on abortion!

This time, Hanson and Ritter took matters into their own hands, founding the unaffiliated group Lxyno for Sexual Health. As stated by Hanson, the mission of Lxyno is “to foster a healthier sexual environment on campus.” To help do this, Lxyno provides free condoms, dental dams, lube, and Plan B — a product which is unaffordable to many students.

Despite the success of the group, there are still issues: “The problem is the school slow rolls or does not approve a lot of demonstrations or events relating to sexual health and reproductive rights,” Ritter said. Loyola does not seem to care about allowing different opinions to thrive on campus.

This attitude not only stifles the Loyola students’ voices, it has tangible negative consequences. An anonymous student survey conducted by Ritter found that 51.6 percent of participants engaged in sexual activity without a condom because one was not readily available.

However, 90 percent of students said they would be more likely to use condoms when engaging in sexual activity if Loyola handed them out for free.

We’re turning in the 1200 petition signatures we collected calling for conforms on campus tomorrow! Be outside the library at 12:45 if you want your voice to be heard! pic.twitter.com/3vPXvdgzxs

Loyola frequently evokes the rhetoric of cura personalis, or the care for the whole person in spirit, mind and body. By not providing adequate sexual healthcare and resources for their students, Loyola is ignoring their health and creating a dangerous sexual environment.

Loyola’s student body clearly indicates interest in improving its sexual health. However, they are stifled by their administration’s unwillingness to concede. Tulane students have the power to play a role in this fight and use our voice, as does our resource-abundant university.

This could be done through donations, social media support, attending events, giving Tulane’s free condoms to people in need of them, or spreading the word about sexual health and the organizations that support. Whether the contribution is small or large, Tulane students can find a way to make a difference in a noteworthy, valuable cause.