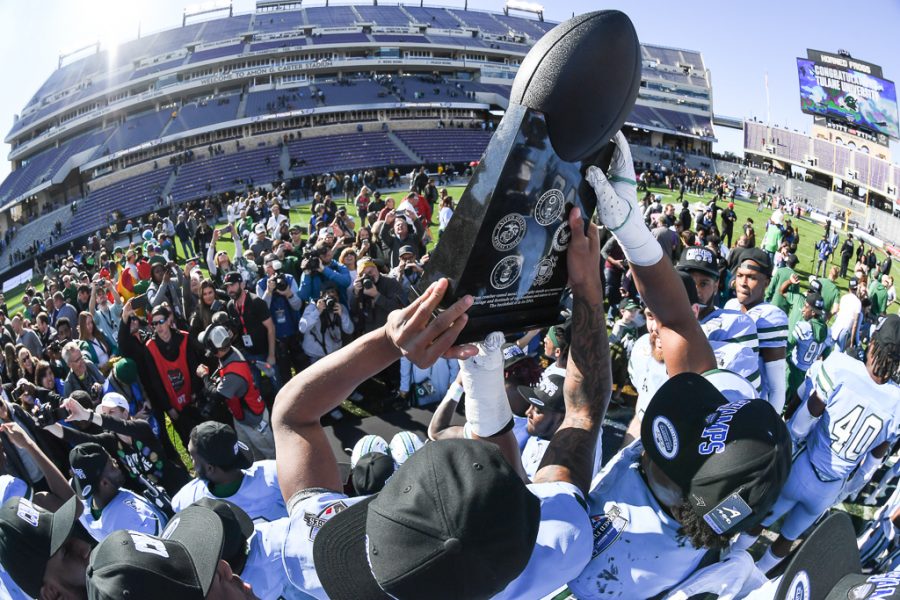 Players hoist their bowl trophy in the air.

With a decisive 30-13 win against Southern Mississippi in which the Green Wave came back from being down 13 at the beginning of the first quarter, head coach Willie Fritz’s team built on last year’s success to secure back-to-back bowl victories for the first time in program history.

The win on Jan. 4 at the Amon G. Carter Stadium in Fort Worth, Texas, allowed the Green Wave to reclaim the bell and renew its rivalry with the Golden Eagles, dubbed the “Battle for the Bell.”

Following an unimpressive first half in which the Wave put up only six points and quarterback Justin McMillan recorded just 22 passing yards, the team went on a tear, scoring 24 unanswered points in the second half.

For the average Power Five conference team, two minor bowl wins in a row might not be out of the ordinary, but for Tulane, this special victory ignited a fire in the belly of every Green Wave fan and inspired hope for the future of the program.

At The Hullabaloo, this exciting victory has gotten our Sports staff thinking one magic word: dynasty. The dream of a dynasty has long been just that, a dream. But even with much of Tulane’s offensive and defensive talent moving on from their collegiate careers, Coach Fritz’s dynamism and creativity might prove powerful enough to bring that word into the conversation.

With two bowl wins under his belt at Tulane, why can’t Fritz get a third, and why can’t that third win come in a major bowl game? Is such an idea really that far of a stretch? While the second half of Tulane’s season featured some tough losses to high quality opponents, can we ever forget the major comeback win against Houston that proved Tulane’s ability to compete against the big boys? With some offseason work, that sort of win could become a mainstay in Uptown New Orleans.

In addition to some offseason tuneups, the team has been bolstered by a list of 2020 commits ranked third in the AAC and 66th in the nation. This is an improvement from last year’s rankings of eighth and 94th, respectively, and the impressive squad includes two prospective replacements for McMillan at quarterback who have both signed letters of intent.

In the wise words of Zac Efron and Vanessa Hudgens in “High School Musical,” this could be the start of something new.