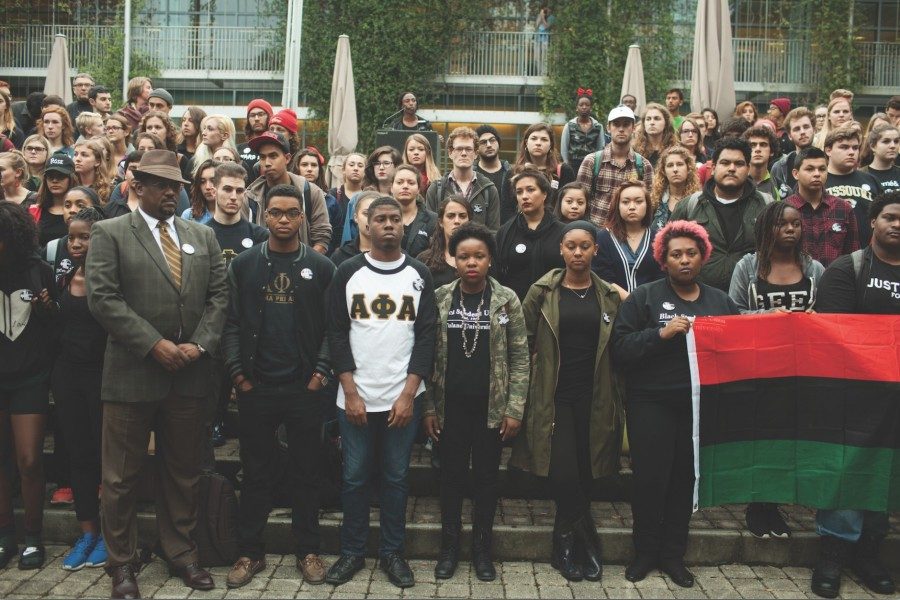 Members of the Tulane community stood on the steps outside the Lavin-Bernick Center at the Call for Unity rally in 2015.

Young people are the future. This message is broadcast every day over the media and through the social movements that have recently taken the world by storm. The importance of youth in activism is apparent when we see the accomplishments of the Parkland survivors, of the young activists involved in Black Lives Matter, of Little Miss Flint.

As college students are inundated with the message that their voices are important, that they can change the world, that they can be the catalysts that will shape the future in their own images. At Tulane, however, it seems that only a small group of students are consistently involved in activism, and the larger student body is largely apathetic.

For those in activist spaces, this is immediately obvious. The same faces reappear over and over, organization to organization. It often seems like everyone knows everyone in activist spaces, which definitely has its pros and cons. Those who show initiative and enthusiasm should absolutely be rewarded with leadership positions, and many of these spaces reflect more diversity than the campus at large. It is difficult, however, to grapple with the fact that many of our peers are completely checked out from campus activism.

It can’t be avoided that Tulane is a bastion of privilege. Tulane is 70% white, and shockingly wealthy, with more students coming from the top 10% income-earning families than the bottom 60%. Studies have shown that those with greater social power by and large don’t think — and don’t care — about those with less social power.

Comfort breeds apathy. For students who are less concerned about their own futures due to their race, socioeconomic status or job their parents have lined up for them after graduation, issues on campus or in the world at large just seem less salient.

Last semester, an Intersections article detailed the way that students of color are pressured to be over-involved in student life. This absolutely extends to activism and social justice spaces. While the presence of marginalized groups in activist spaces is vital for their success, there is something fundamentally wrong with the burden being placed on these students alone. While marginalized students are encouraged to heap on responsibilities and be the change at Tulane, their privileged peers are able to sit back and observe without facing significant backlash.

Tulane students at large should be joining the thousands of young people across the world who are taking an active stand for the future. While this doesn’t mean inserting themselves into places they don’t need to be, student activism deserves student support. Students have a responsibility to their peers to show up for events like Shifting the Paradigm, and all students should feel impassioned about issues that affect their community, even if it doesn’t affect them personally.

College students, and young people as a whole, have historically been deeply important in social movements, and that continues to be the case today. Tulane students, however, need to be galvanized into action so the responsibility of activism on and off campus doesn’t fall to the few.