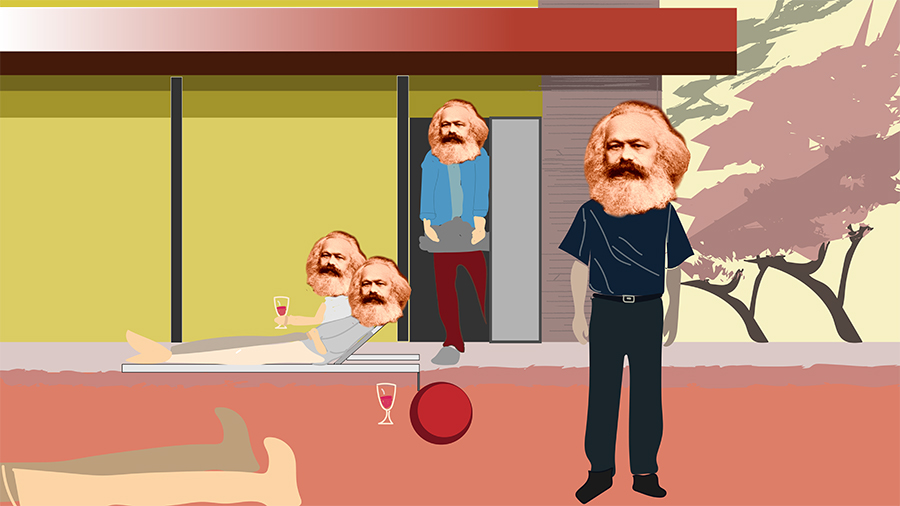 Bong Joon-ho’s 2019 film Parasite won big at the 92nd Academy Awards this weekend, a (seemingly) expected outcome after unanimously receiving the Palme d’Or during its premiere at the Cannes Film Festival. However, the film’s critical success is more surprising considering its sharp criticism of class antagonism and acute insight into the structure of class warfare.

Parasite is structured around the differences between two families, the proletarian Kims and the bourgeois Parks, and the class antagonisms that arise from their interaction. An enduring theme in Bong Joon-ho’s work, 2013’s Snowpiercer also heavily emphasizes class conflict between the influential bourgeoisie and the working class. Joon-ho places a critical lens on  the Kim family as they attempt to get rich, modelling themselves after their employers, the Park family. One night as the Kims take advantage of the Parks’ empty home, they must scramble and hide to avoid being caught by the family returning early from a camping trip. Though the Parks seem to view their employees as equals, the working class Kims soon learn of the Parks’ true feelings toward them, reinforcing their position as inferiors. In the chaos of the night, the Kims kill the old housekeeper, Moon-gwang, and restrain her husband, Geun-sae. They discover that Geun-sae, who has been living in a secret bunker under the house for four years, has gone insane  worshipping Dong-ik, the patriarch of the Park family. Geun-sae thanks and praises Dong-ik for his patronage and providing him with food and shelter, when in reality, Dong-ik is completely unaware of the existence of Geun-sae, let alone that he lives under his home and that Moon-gwang brings him food from the house.

By the end of Parasite, the Kim family is left fractured., After failing to join forces with Moon-gwang and Geun-sae, the working class characters of the film are left dead, in hiding, or struggling. Choosing instead to emulate the Parks, the Kims adopt a bourgeois mentality, pursuing profit and material gain over solidarity with their fellow workers, alienating them from a potential base of support and leading them towards collapse. Although the Kims put on their best performances for the Parks, they are still viewed as their inferiors. Ultimately, the Parks  maintain their own class-consciousness. Aware of their position in the class hierarchy, they don’t truly associate with the Kims and instead treat every interaction as one between boss and worker.

In an interview with GQ Magazine, Bong Joon-ho remarked “…we live in the era of capitalism. I think we all have a very sensitive antennae to class, in general,”. This statement underpins Parasite’s central message, articulating that without an understanding of class and one’s place within the class structure, the working class is susceptible to catastrophe and fracture that can only serve to weaken themselves. Just as Geun-sae went insane worshiping Dong-ik, who didn’t even know that he was alive and living under his home, the Kims sowed the seeds of their own demise by damaging other workers and taking their positions. As the disparity between the ruling class and the working class of the United States grows daily, this film serves as a timely reminder of the importance of class analysis, prompting the viewer to reconsider social hierarchies and the economic underpinnings of today’s global society.