Does the Louisiana Democratic Primary matter? 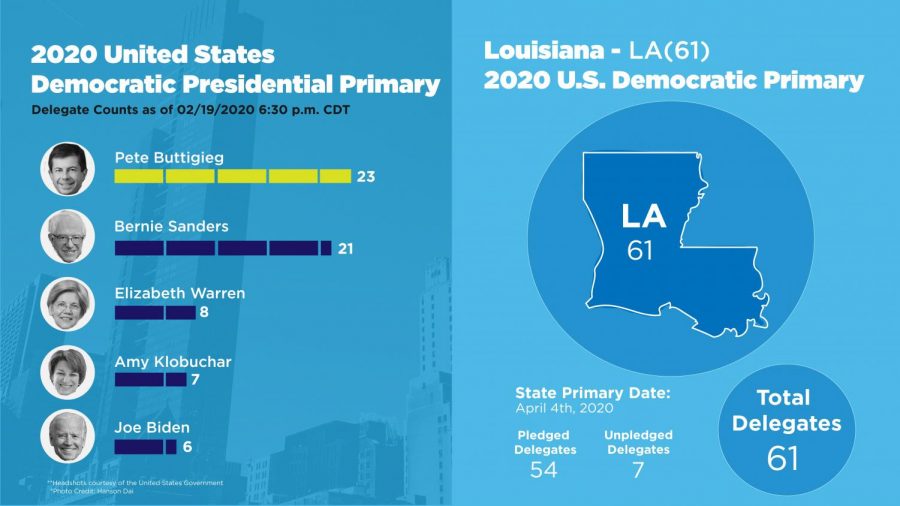 Some of Tulane’s voters are native to Louisiana, but many aren’t and have chosen to vote in Louisiana rather than their home state. If they are voting in the Democratic primary, they must be registered Democrats, according to Louisiana law. Many choose to register in Louisiana to support Democrats in state and local elections, such as the 2019 gubernatorial race in which John Bel Edwards, the Democratic candidate, won reelection.

It seems unlikely that Louisiana’s choice for the Democratic nominee will matter very much in swaying Louisiana’s delegates for the general election. Louisiana’s unique political history, however, should be considered. Currently, models predict that Bernie Sanders will have a plurality in Louisiana’s Democratic primary, as a self described “democratic socialist.” Louisiana, unlike some of its neighboring states, has historically proven tolerant of socialist politicians, such as its most notorious — and still well-loved by many — politician, Governor and Senator Huey Long. A Democratic win in Louisiana, however, would still be a major long shot.

Despite Louisiana likely going red in the general election, the Democratic primary will reveal key information about the demographics of voters here. Many of the Democratic candidates are running on the notion that they can harness the vote of the independent and undecided in the presidential election, notably those who may have voted for Donald Trump or didn’t vote at all in 2016 and may be swayed this time around, while also increasing and maintaining turnouts with populations who consistently vote Democrat.

The choices of independents in the general election will likely be a major deciding factor in the 2020 Presidential Election. Due to Louisiana’s closed primaries, the information that can be gained about this group is limited. This is unfortunate because Louisiana has a rising number of independents who will be shut out of both primaries, and therefore it will be difficult to gather data on them before the general election. However, they aren’t the only major voting demographic in Louisiana that Democrats should be paying attention to.

Of Louisiana’s 1,255,250 registered Democrats, almost 60% are Black. Black voters, especially Black women, are the most consistent Democratic voters in the country. A Democratic candidate has little to no chance of winning the general election if they don’t have overwhelming support from Black voters, so the Democratic Party would do well to pay close attention to which candidate is most popular with Black voters and understand why other candidates are less popular.

This is one of the main reasons that South Carolina is considered a crucial state in the primary. Though Louisiana’s primary will come much later, it can continue to provide us with this key information. While the Democratic National Committee has a history of discounting and taking for granted the voices of Black voters in electoral politics, one can hope that in such an important race the establishment will recognize how dramatically they depend on Black voters.

With many predicting a contested convention, all the information gathered in the Democratic primaries will be deeply important, even in late states like Louisiana. Louisiana likely won’t decide the presidential election, but the information its voting patterns could give the DNC will be imperative for beating Trump.