I am not a threat 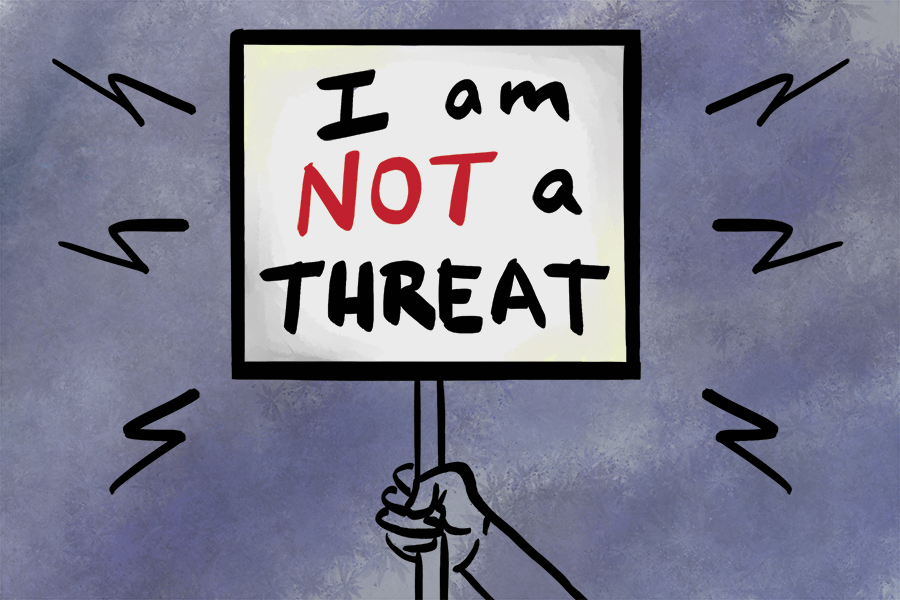 The day started with a stressful presentation looming over my head.  It was for my major seminar class in political economy and had to be at least 30 minutes long. I got out of bed early around 7 a.m. because I knew I needed the time to prepare. I put on my navy slacks, my favorite button-down and a gray blazer. Siri told me it was going to rain that day, so I grabbed my green and white umbrella and made for the door.

I had a light breakfast and then headed to the library to read and review my notes. After a few hours there, I decided it was time to practice my delivery. I needed a quiet room to myself with access to a white board. The only available places I could think of were the intimate study lounges in Mayer Residence Hall. My presentation was at 3 p.m. and time was ticking away, so I hurried over.

My responsibilities as a Resident Advisor grant me access to all of the university’s housing units. I tapped my Splash Card on the card reader and entered Mayer. I thought for sure there would be some private lounges on the first floor, but nothing was immediately visible. All the rooms around had students’ names plastered on the doors. I walked back down the hall and saw an unmarked door that appeared to be a study lounge. I grabbed the handle and pulled down — locked. Rushed, I went up the stairs and eventually found a study space.

I put my things down, took a deep breath and got started. After a few minutes, I noticed a few TUPD officers moving around the quad along with TEMS members rolling up to the dorm with a stretcher. I figured the police presence was related to that and went back to preparing for my class.

Shortly after that, a plainclothes officer swung open the door. I was initially startled but then was immediately assured because it turned out I actually knew this particular officer. He had assisted me in escorting Congresswoman Maxine Waters for an event the previous semester.

I stood up and shook his hand and told him what I was doing. He pointed toward my umbrella, asked whether it was mine and whether I was in another part of the building. I told him yes since I was looking for a study space. He said okay and then left.

He came back a few minutes later with two other officers and informed me there had been a couple of burglaries around campus. Apparently, a student called and reported a 6-foot-3-inch Black male carrying a green and white umbrella going around “jiggling handles.”

I’m not sure if this person mentioned the professional attire I was wearing or my backpack, but none of that mattered. The officer I knew said he told the other officers not to worry because I was “squeaky clean.” This didn’t stop them from asking for my information. I had to hand over my ID and Splash Card. They jotted down a few things, saying it was only to record that they had spoken to me, and then they left.

I tried to forget it and go back to my presentation. But internal questions kept coming up and weighing on me. “Was I just profiled?” “What if I didn’t have a previous relationship with one of the officers?” “What if I wasn’t dressed in my professional getup?” “If I were 5 feet, 3 inches, 120 pounds and named ‘Becky,’ looking for a study room, would that person who called the police think I was up to no good?”

I’m not one to make a big deal out of these things, but I couldn’t shake the feeling of being a criminal in my own home. A feeling I’ve tried most of my life to escape. A feeling too many Black and brown people feel around the country and especially in the Deep South.

When I transferred to Tulane two years ago, I thought I had found a place that was a good fit for me. It’s painful to think one of my fellow students would see me and immediately view me as a threat. But I am conscious of how this is all too often the case. Black and brown bodies have had to walk on eggshells in primarily white spaces to make others feel “safe.” I’m constantly aware of how I approach people or enter a space. It’s exhausting.

It reminded me of the many incidents in which students of color are targeted and profiled on their campuses. Stories like Lolade Siyonbola, who was pursuing her master’s degree in African studies at Yale, when a white student apparently saw Siyonbola napping in the common room and decided the police needed to be involved. Or Alexander McNab, who was a senior at Columbia University walking to the library one night and ended up being forcibly pinned to the ground by officers.

Neither Lolade, Alexander or I were threats. Yet we were treated as such while going about our everyday lives as students.

Stories like these are not the fault of one person. Racial profiling is the result of unconscious bias. It pervades each of us, spreads like a weed, permeates the air and rears its ugly head at the most inopportune moments.

As we celebrate Black History Month, it’s my sincere hope that we can all become a part of a more conscious community — one we are all proud to call home.

The ACLU has developed an advocacy toolkit to help college campuses better address this problem.