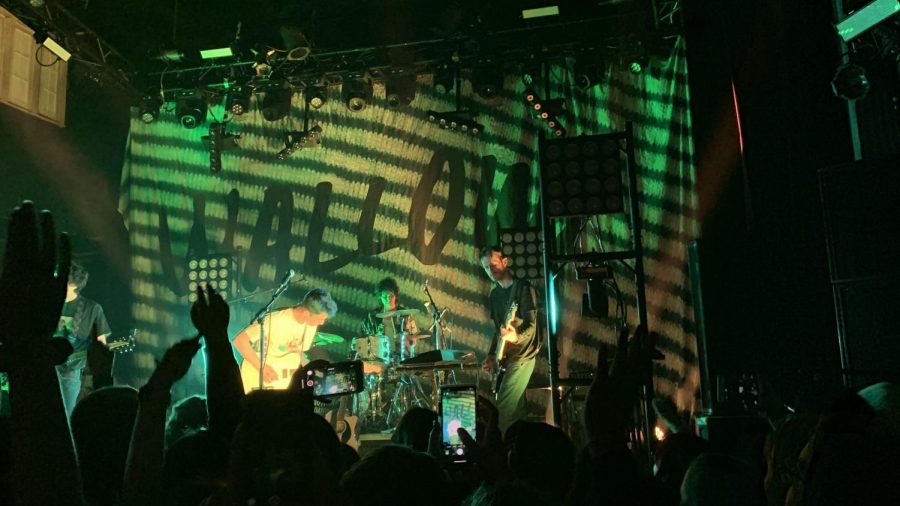 Wallows brought its indie rock charm to New Orleans this weekend, playing at the House of Blues on Valentine’s Day. The venue was packed — many guests took advantage of the upstairs seating available, but the general admission section was still extremely crowded. Wallows attracted a wide variety of people, with everyone brought together by their mutual love of the Los Angeles-based band.

The night got off to an enthusiastic start with opener Penelope Isles, a four-person band based in Brighton, UK. The band enchanted the crowd with their dreamy take on pop styles.

The anticipation in the audience was palpable during the time between Penelope Isles and Wallows, with some fans even holding up messages on their phone for the rest of the crowd to read. One read, “Wanna mosh?”

Wallows finally took the stage around 10 p.m. The band, consisting of lead singer Dylan Minnette, lead guitarist Braeden Lemasters and drummer Cole Preston, was met with cheers and excitement from the crowd.

Minnette, often recognized for his role as Clay Jenson in the popular Netflix series “13 Reasons Why,” immediately caught the crowd’s attention with his bright blue hair, matching the aesthetic of the album cover on their debut album, “Nothing Happens.” During the set, the band shared an anecdote about how the photo on the album cover, a close-up of a shirt, was taken in New Orleans, memorializing the shirt — although it later burned in a bus fire.

Beginning their set off with a cover of The Beatles classic “If I Fell,” the band played a variety of songs ranging from slow songs to more upbeat jams. They mostly played songs from their recent debut album, “Nothing Happens,” but also played some singles and songs from their first EP, “Spring.” Crowd favorites included “These Days,” “Are You Bored Yet?” and “Pictures of Girls.”

The band’s performance was enhanced by the atmosphere of the venue, with flashing lights on the stage energizing the performance. They also brought out a trumpet player during a few songs, including “Sun Tan,” which increased audience energy and brought something different to the stage. Wallows finished out their performance with “Scrawny,” one of their most popular singles from “Nothing Happens.”

After loud calls from the crowd for the band to come back, they returned for an encore, to the delight of the audience. The band asked the crowd how everyone’s Valentine’s Day was going and then played an acoustic version of Édith Piaf’s classic French ballad “La Vie en Rose,” which Minette referred to as “the best love song ever written.” Following this, Wallows played “Only Friend,” the first track from their debut album “Nothing Happens.” They closed out the set with their first single and one of their most popular songs, “Pleaser,” leaving the crowd satisfied and cheering long after the band left the stage.