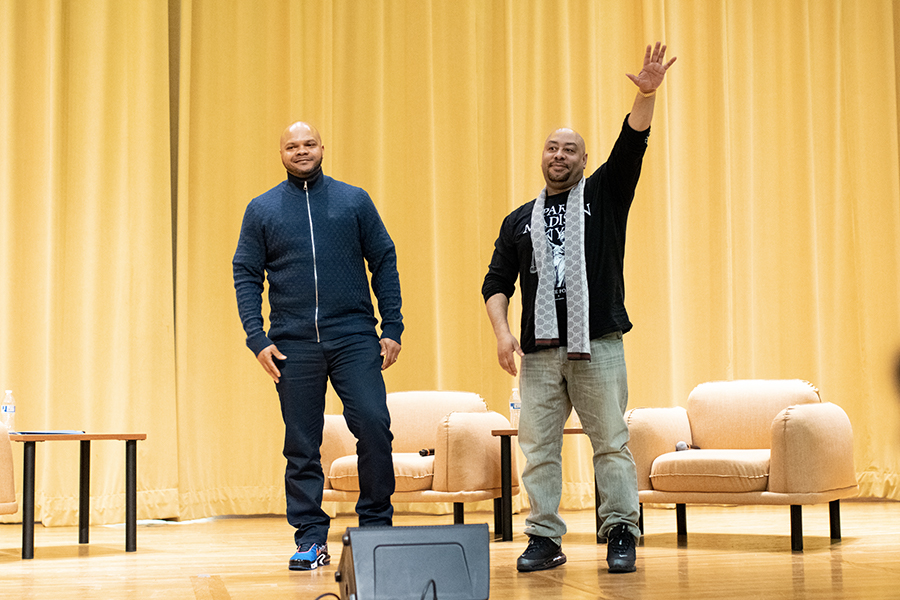 This past Monday, Kevin Richardson and Raymond Santana, members of the “Exonerated Five,” spoke to a crowd of 750 in the McAlister Auditorium. The event was co-sponsored by the Office of Multicultural Affairs and TUCP Direction and moderated by Alanah Odoms Hebert, the first black woman to be named Executive Director of the ACLU of Louisiana.

Richard and Santana, along with 3 other boys, were arrested and charged as young teenagers with the rape of a white jogger in Central Park in 1989. They were subjected to brutal, tedious interrogations by police, eventually leading to false confessions. In one of most famous and publicized trials of the late twentieth century, the boys were convicted and sent to prison, despite contradictory evidence, including DNA, and little tying the boys to the case beyond their recanted, coerced confessions.

The media dubbed the boys “The Central Park Five” and ran article after article dubbing them “savages” and a “wolfpack.” Then a big name in New York real estate, Donald Trump spent $85,000 running ads calling for the death penalty for the boys. Despite this, they maintained their innocence until they were eventually exonerated in 2002, when Matias Reyes, a convicted rapist, confessed to committing the crime alone. His DNA also matched that found at the scene. The five, adults by this time, had their charges vacated and eventually were awarded $41 million in settlement from the city of New York.

In 2019, director Ava Duvernay created a Netflix mini series surrounding the case titled “When They See Us.” It brought the case back into the national spotlight, especially the roles and misconduct of prosecutors Linda Fairstein and Elizabeth Lederer. The case has become a major part of the growing discussion in the ways black and brown boys are systematically disadvantaged and made victims by the American criminal justice system.

The newly dubbed “Exonerated Five” have become advocates for criminal justice and reform and travel the country speaking about their case and the larger system it is tied to. At Tulane, Richardson and Santana spoke about the adversity they had faced, and how it affected them still. They addressed necessary responses in regards to their own case, as well as larger reforms to address the systemic problems that have put many other boys of color in similar positions. One of the major reforms they called for was the abolition of prosecutor immunity.

A student asked the two what they carried with them from prison, and what was the hardest aspect to let go of. Both Santana and Richardson spent the bulk of their teen years in prison for the rape conviction.

Much of the discussion centered around themes of accountability and reparations. Fairstein, who used the case to build a long term career as head of the New York sex crimes unit and as a crime novelist, came up repeatedly. Fairstein has repeatedly denied responsibility for the case and recently published an opinion piece in the Wall Street Journal accusing the men and Duvernay of defaming her and insisting upon their guilt. She has never apologized for her role in the case. The city of New York, despite the settlement, has also never admitted wrongdoing.

“We looked them right in the eye and they would not look at us. [Lederer] just looked at the ground,” Richardson said, of depositions where the men were finally able to come face to face with the team that had railroaded them decades earlier. According to the men, actors like Fairstein and Lederer were “protected by the system” and it was only through the recent power of social media and young people that they were able to held accountable in a more fundamental way. Both Lederer and Fairstein resigned their lecturing and board positions for various organizations and institutions in the wake of criticism following the Netflix miniseries.

Richardson and Santana told students that they traveled to colleges both because they hoped that they could inspire students to become public defenders or otherwise join in the fight to reform and protect the most vulnerable from the carceral system, but also because they know that the college students they spoke to would also be in the position to reinforce and carry out this system. They hoped that these students would carry the story of the Exonerated Five with them.

“We want you to become prosecutors, judges, chiefs of police,” Santana told the crowd. “Occupy those spaces, and once you get there, remember who you are…use your privilege to raise someone else up.”