Tulane community gathers in support of Uptown for Black Liberation 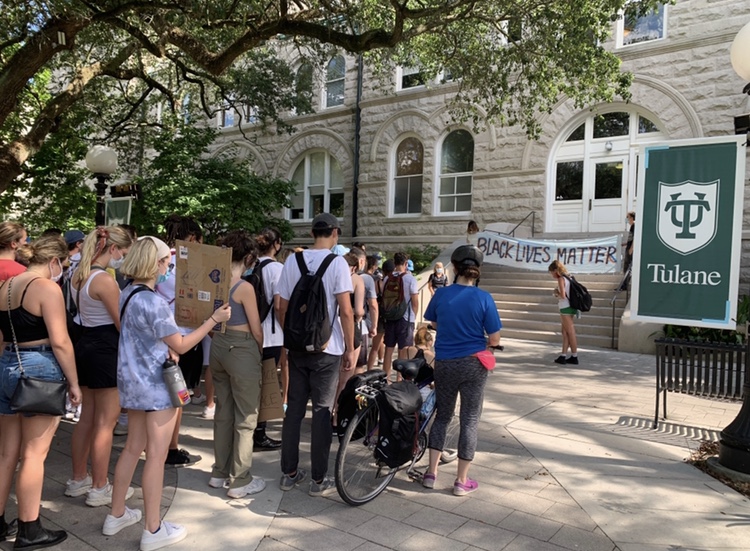 Tulane students, faculty, staff and Uptown community members gathered Friday afternoon in front of McAlister Auditorium for the Uptown for Black Liberation demonstration in solidarity with New Orleans organizers and the Black Lives Matter movement. The meeting aimed to foster productive conversations around issues of racial injustice and police brutality before the large group marched to meet New Orleans organizers at the demonstration in Jackson Square.

“Uptown for Black Liberation was created just because my friends and I who were in town had been attending the protests,” Jessica Galloway, a Tulane senior and one of the Uptown for Black Liberation organizers, said. “But I think we all just really wanted to encourage the college students who live Uptown and many other members of the Uptown community who may have not already been showing their support for the local organizers to come with us and do that.”

The campus demonstration featured several speakers addressing issues of inequality at Tulane.  Student coalition Les Griots Violets spoke, calling for instructional change at an institutional level and passed out informational flyers about the Equity Fee, an increase in tuition proposed in October 2019 that would allocate more resources to marginalized students. Tulane political science Professor Myra Holman provided some historical background on systemic racism and police violence in New Orleans as well as a discussion of the role of white allies in the movement.

“Students have the power to make tangible, important changes in the fight for Black liberation, and as white students in a predominantly white institution in a predominantly Black community, all of you have an obligation to put your full support behind this,” she said to the crowd.

Demonstrators met where the Victory Bell previously sat in front of McAlister Auditorium, before it was taken down after President Mike Fitts and the Presidential Commission on Race and Tulane Values rediscovered its original use as a plantation bell directing slaves. Though the bell was removed, students never formally acknowledged, in the form of a demonstration or otherwise, this revelation of Tulane’s further entanglement with racism and slavery. The organizers of Uptown for Black Liberation hoped that this demonstration would function as a space for the Tulane community to come together in opposition of this history of white supremacy.

After the gathering, participants marched with protest signs and a Black Lives Matter banner through campus. They paused in front of Gibson Hall for a moment of silence honoring Breonna Taylor, an EMT killed by police officers in Louisville, Kentucky, who would have turned 27 on Friday. The group continued down St. Charles Avenue on a long march to Jackson Square where they joined thousands of other protesters in a peaceful demonstration. Uptown for Black Liberation organizers provided water, snacks and other supplies to support those marching, as well as information about how to protest safely.

“People kept coming up to me after the speakers were done being like ‘how do you feel?’ and I didn’t really know how to answer,” Galloway said. “I don’t think it really hit me until we were marching down St. Charles and that group of maybe like a hundred people were chanting ‘Black Lives Matter’ at the mansions on St. Charles and having people who were driving by in their cars or walking down the streets hold up Power to the People fists to us and honked [at] us in support and that was just really cool to me personally.”

This demonstration occurred following seven days of protests and marches in New Orleans as a response to George Floyd’s killing by police in Minneapolis and overall historical issues of police brutality and racist violence. Each day, protesters have organized and gathered in Duncan Plaza before marching through the historic French Quarter and other areas of New Orleans.

Protests have been peaceful, but on Wednesday night, New Orleans police deployed tear gas into a crowd marching towards the Crescent City Connection bridge. On Thursday night, demonstrations continued, focusing on justice for Modesto Reyes, a 35-year old Black man and surviving construction worker of October’s Hard Rock collapse killed by a Jefferson Parish sheriff deputy near his home. Protestors marched on the Broad Street overpass to the NOPD Headquarters. On Friday evening, thousands gathered at Jackson Square in the French Quarter with a series of speakers calling for revolutionary change and the removal of the Andrew Jackson statue.