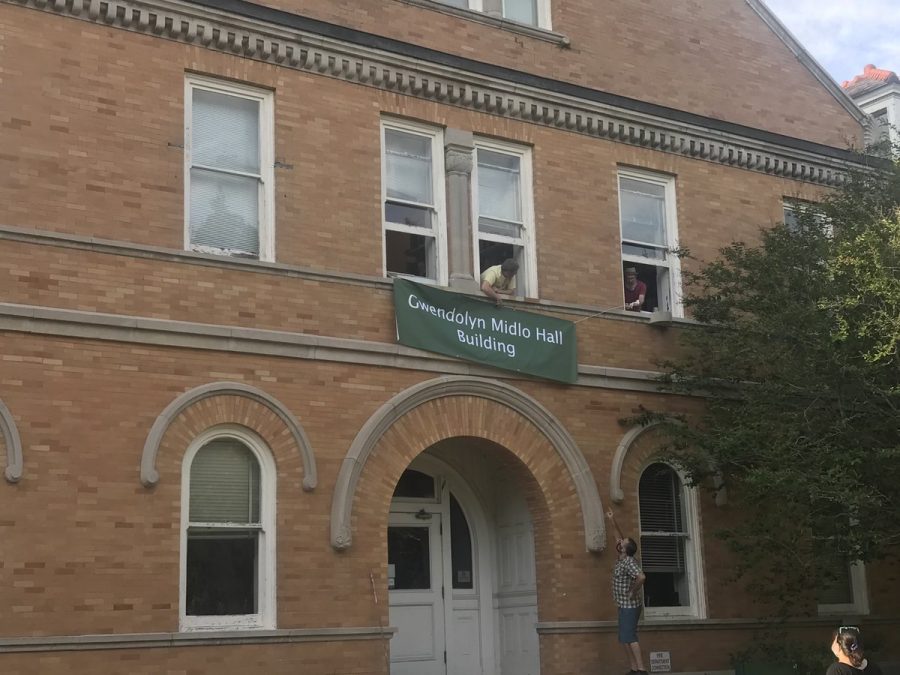 The Tulane Hullabaloo is a nonprofit newsroom that receives no funding from Tulane University. Consider subscribing today to support our mission.

This Saturday, June 20, History and Latin American Studies faculty at Tulane University unofficially renamed the F. Edward Hebert Hall as the Gwendolyn Midlo Hall Building. Located on the Academic Quadrangle of the Tulane Uptown campus, the building’s new name was inaugurated with a banner hung over the entrance.

Gwendolyn Midlo Hall, to whom the building is to be dedicated, is a prominent historian who has dedicated her life to the study of Black enslavement and has been an avid activist on the behalf of rights for Black Americans.

The controversial namesake of the building has been a topic of discussion within the Tulane community in recent years. Hebert was a Tulane graduate and a congressman representing the 1st Congressional District of Louisiana, but is notoriously remembered as a segregationist in vehement opposition to the Civil Rights movement and a supporter of the Southern Manifesto.

In 2017, students Shahamat Uddin, Sonali Chadha and Juharah Worku wrote the original legislation calling for the renaming of the building. While the resolution was passed by the Undergraduate Student Government, no action was taken by the administration.

“Shahamat, Juharah, and I are elated regarding the History, Latin American, and Africana Studies professors decision to rename F. Edward Hebert Hall,” Chadha, now graduated, told the Hullabaloo. “We would also like to uplift the work of Dr. Laura Adderley, a Black woman in the Africana Studies department, who guided, advocated, and fought with us in 2017 and 2018, who was behind these professors’ work. We spent much of our undergraduate career advocating for this change and it feels overwhelming to see this happening. We are especially grateful to these professors for forcing the administration and president to unequivocally take a formal stance on this issue, regardless of donor money or legal ties.”

Despite a central focus on Hebert Hall, it has not been the only university building to come under scrutiny. Tulane’s campus is home to various structures named for racist figures, including the pinnacle of the academic quad, Gibson Hall, which was dedicated to Confederate Brigadier General Randall Lee Gibson. Paul Tulane himself was the single greatest donor in New Orleans to the Confederacy.

The push to rename buildings across campus has come back into the spotlight amidst ongoing nationwide protests regarding police violence against Black people. President Mike Fitts recently announced a plan to create an anti-racist Tulane, including a task force dedicated to reevaluating the policy of naming spaces on campus. However, this action to rename Hebert Hall was not approved by the administration.

“The name of the building has not been changed,” Mike Strecker, executive director of public relations, stated. “Tulane is committed to building a more diverse, equitable and inclusive academic community.”