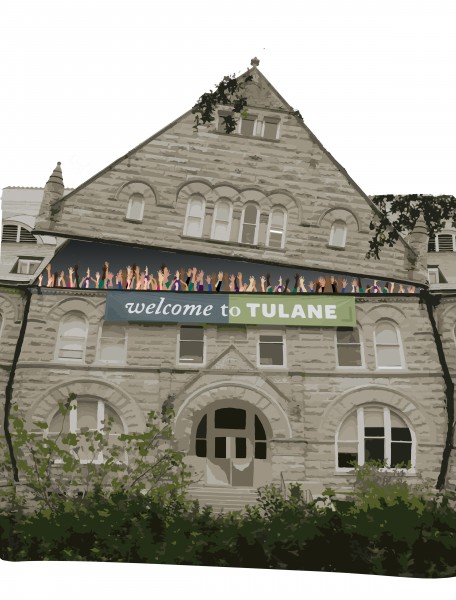 Bursting at the seams: Tulane adjusts for two biggest classes in history

Following the enrollment of the two largest classes in Tulane’s history, the Tulane administration and campus facilities are making necessary changes to accommodate student needs.

The Class of 2020 already hit an all-time high for student enrollment with a class size of 1,849 students, exceeding the previous class by 100.  The Class of 2021 is comprised of 1,897 students even though 700 fewer students were admitted than were the year before.

Though admissions lowered the acceptance rate, it can be difficult to predict exactly how many students will actually enroll, according to Director of Admissions Jeff Schiffman.

“Our yield went up unexpectedly which resulted in a larger class,” Schiffman said. “Even a 1 percent increase in yield can lead to additional students in a class, and we’ve seen our yield rate increase a few percentage points each of the past few years.”

When admissions realized the Class of 2021 would be bigger than expected, the university made some accommodations.

According to sophomore Maddie Muldoon, who lived in a Wall triple her freshman year, space was the key issue.

“Ultimately space was the biggest issue throughout the semester … three people in that space was kind of crammed because it is a space intended for two people,” Muldoon said.

Freshman Hannah Erbrick, who lives in an extended double that shares a bathroom with a triple, agrees that the lack of space and not being able to have her own regular-sized wardrobe has been a problem.

“The small wardrobe, frankly, is not good for anything,” Erbrick said. “None of my shirts will fit in there. I can’t hang any of my clothes in there. The bigger wardrobe is fine, but we only have one of those.”

Last year, freshmen living in triples were not notified of a third roommate until a couple of weeks before move-in day.

“… if they announce it ahead of time where people just know that that is a thing that could happen, that would make it go over better, I would say,” Muldoon said.

This year, Tulane warned incoming students that this could be a potential dorm situation and gave them an opportunity to opt in to triples. Those who requested or said they would be willing to live in triples or extended doubles enjoy lower housing costs, free printing and free bathroom-cleaning services.

“… we went ahead and strategically marketed triples along the way,” Vice President of Student Affairs Dusty Porter said. “I want to say that almost 80-90 percent of the students living in triples this year indicated on their housing preference form that they would be willing to live in a triple, so that helped.”

Porter said another focus of the accommodations has been adding additional staff across campus, particularly in health services, Counseling and Psychological Services, Student Resource and Support Services and the Goldman Center for Student Accessibility.

In a meeting with student organizations, the Division of Student Affairs and President Michael Fitts, many students cited overcrowding at Bruff Commons during breakfast and lunch as a concern, according to Porter. In response, Dining Services has implemented campus-wide changes to make meals more accessible to students during all hours.

According to Lisa Norris, director of Dining and Auxiliary Services, adjustments were made last year to accommodate the increasing class size. This included adding meal swipes usable outside the dining hall called “Quick Picks,” which have been added to many Lavin-Bernick Center for University Life dining locations. Dining Services has also extended the hours of Roulez and Ironsides Waffles to include breakfast hours.

“It’s never been too much of a problem for me,” freshman Benton Meldrum said. “The lines [at Bruff] are definitely annoying, but it’s manageable.”

Academic Affairs also implemented initiatives such as adding new sections to classes to ensure students could enroll in classes in which they were interested.

“We did inventory of freshman classes to see where we expected to run into problems with seats, and wherever possible we added new sections,” Robin Forman, provost and senior vice president for Academic Affairs, said. “I was pleasantly surprised by how successful our registration process was. Every single student got into a full slate of courses.”

Reily Student Recreation Center will also undergo changes to account for its increased membership and to keep up with growing needs within the facility.

“We are actually in the process of renovation to the atrium area on the second floor,” Director of Tulane Campus Recreation Wendy Windsor said. “There will be a new flooring put in to accommodate a new cardio fitness space.”

Rather than continuing the expanding class trends from the Classes of 2020 and 2021, the Office of Undergraduate Admission plans to lower the incoming class size in the future.

“The plan is to decrease the size of the next incoming class back to around 1,700 students,” Schiffman said.

Despite some of the changes for which growing class sizes have called, increases in applications and enrollment could help the school in years to come, according to Schiffman.

“In my opinion, the higher yield symbolizes that Tulane has now become the school of choice for many high school students rather than being a second pick or a safety school,” Schiffman said. “In the long run, this has tremendous benefits for our students, our alumni and the reputation of the institution as a whole.”

Donate to The Tulane Hullabaloo
$1150
$1000
Contributed
Our Goal