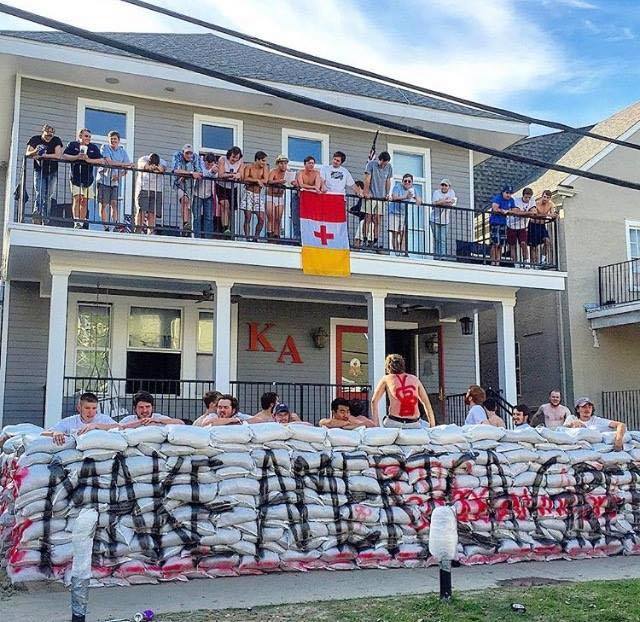 Kappa Alpha Fraternity members at Tulane University constructed a wall out of sandbags that read “Trump” on their front porch that many students found to be targeting and racially motivated.

A group of Kappa Alpha Order members removed a wall displaying Donald Trump slogans from their house Tuesday after a Latino student organization took to social media to express their offense and concerns, drawing national media attention to the issue.

The wall is part of the fraternity’s annual formal week and is used for a game of capture the flag. The slogans of “Trump” and “Make American great again” were added this year. Tulane’s Latino student organization Generating Excellence Now and Tomorrow in Education, commonly known as GENTE, launched a social media campaign #StandWithYourGENTE in order to voice their concerns about the wall.

“My organization GENTE came together … and we decided we would speak up about it because, just as they were given the liberty to display something like that, we were equally going to use our freedom of speech to speak against how this made us feel,” GENTE president Ana DeSantiago said.

According to Jesse Lyons, Kappa Alpha Order national assistant executive director for advancement, however, the game of capture the flag has been an interfraternity tradition for years and the wall was meant to be part of a light-hearted game.

“[The members] have always played a game of capture the flag, and the sandbag wall acts as a barrier to defend the flag from whichever team has it,” Lyons said. “Other fraternities have enjoyed this tradition and participated in the past, and the football team has historically participated.”

As the social media campaign gained attention across Facebook and Twitter, KA chapter president Joe Bonner sent an email to the GENTE president-elect Dillon Perez. Perez’s social media posts were some of the first to gain attention. He provided a copy of the email to The Hullabaloo.

“I am very sorry students found this offensive,” Bonner wrote in a portion of the email. “As soon as I was notified that students complained, the wall was dismantled. … I would really appreciate it if you would take your social media posts down, and encourage others to do the same. I find them uninformed and disrespectful. We took the time to meet with a panel of students and explain many things about our formal, including the wall. We told you then it was a joke.”

In response to the complaints, members of the fraternity took down the wall Tuesday early afternoon. At one point in the day, several members of the football team were seen taking down part of the wall in a video that has since circulated on the internet. 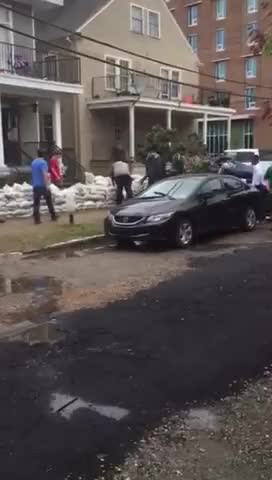 A collective of students, including members of GENTE, Students Organizing Against Racism and other organizations allied with anti-racist movements, drafted a petition in support of the football players seen in the video. The organizations expressed concern that these individuals would be penalized by the university.

“We originally started the petition in support of the [football players] who took down the wall because we were afraid they would get in trouble for their actions,” junior Manali Souda said, on behalf of GENTE and SOAR. “We wanted to demonstrate solidarity with them.”

Before this year’s events, leadership in Tulane’s KA chapter called a meeting with several student and staff leaders in the Office of Multicultural Affairs to discuss previous concerns regarding the week-long formal traditions. The activities were previously called Old South and are now referred to as Crimson Ball.

“Prior to this week, we met with various students so that we could hear any concerns of our formal week, address any issues, and explain our reasoning for everything,” Lyons said. “During this meeting, we explained the wall to the concerned students and they were made aware then that it is meant to be satirical.”

Junior Katalina Euraque, a member of GENTE and SOAR, said she believes the argument that the wall was satire shows a lack of understanding on the part of KA and also shows a lack of willingness to understand where students of color are coming from in their concerns about the wall.

“I feel like it’s typical white privilege to say, ‘oh it’s a joke, it’s funny,'” Euraque said. “It’s not funny when people are literally dying. The rhetoric that Donald Trump has built his literal campaign on, it’s always specifically white men who are saying ‘it’s just a joke.’ It’s just a joke for you because you’re not impacted by it.

Carolyn Barber-Pierre, assistant vice president of the Division of Student Affairs and director of the OMA, has been at Tulane since 1984. She said she remembers a time where members of KA walked around campus in Confederate costumes with Confederate flags during Old South. She finds many of KA’s traditions problematic, believing it to be more of a historical than a political issue.

“You know that there has been a heightened sensitivity around this whole thing [referring to Trump’s comments about building a wall on the U.S.-Mexican border], why would you make fun of it on campus?” Barber-Pierre said. “You’ve never stopped to think how that would affect you? You’ve never put yourself in the position of [other] people? Now if it would have been a swastika [or another symbol of hate] this whole conversation would have been different, totally different. And I hate to call on that because some people say that’s unfair and you can’t use that comparison but again, freedom of speech.”

Members of GENTE created a wall of their own, crafted from a bed sheet, which they hung Wednesday outside the OMA. The sheet was decorated with an image of a crumbling wall on it, and featured the words “breaking down the wall of ignorance and hate to build a community of inclusion.”

GENTE encouraged students to write supportive messages on the display. More than 50 people signed it when it was taken down for the day on Wednesday evening due to concerns about possible vandalism.

The walls sparked responses about more than just concerns of racism. Freshman GENTE member Khristyan Trejo said he believes this incident has raised the question of who has to deal with the repercussions of racist acts on Tulane’s campus.

“This brings up a larger question of the way that Greek life is represented and how Tulane’s administration deals with issues like this,” Trejo said. “The wall being taken down was not effectively done until students of color had to do it themselves. I think that speaks to a larger question of where do students of color go to when a situation like this arises in the future.”

Perez recognized KA’s right to free speech, but also exercised his own rights.

“I agreed [with] and fully respect KA’s right to freedom of speech,” Perez said. “It needs to be defended and acknowledged. We as students of color, and especially GENTE members, who have been heavily affected by this have a right to respond and have our own right of free speech to express our reactions to KA’s actions.”

“To me, KA sent a clear message: this campus isn’t for all of us,” Hicks said. “They are wrong.”

After Tuesday’s wall dismantling, Tulane’s Division of Student Affairs stationed a security guard at the KA house as “precaution in light of the controversy regarding the now dismantled wall,” Tulane Executive Director of Public Relations Mike Strecker said.

“I think that it is really absurd how [Kappa Alpha Order] is getting some form of physical protection because they feel threatened by the fact that a few students decided to dismantle that wall,” DeSantiago said. “When we, as students of color, have expressed our fear of getting to our dorms, our fear of just being around campus … They have said nothing, and they have offered no sense of security for us.”

The university sent out a statement in an email on Wednesday morning to all students, staff and faculty in response to the incident. Vice President of Student Affairs Dusty Porter sent the email.

“As an institution of higher education and learning, we are committed to exploring ways to facilitate learning opportunities from this incident,” Porter’s email read.”We remain committed to our values of free speech and inclusion in a learning environment that thrives on the expression of multiple perspectives and viewpoints. Simultaneously we remain committed to supporting all our students in alleviating anything that detracts from the educational environment.”

Some GENTE members found the email and university’s response to be problematic in terms of listening to both sides of the issue. Porter wrote his office was “working with students and community members in a comprehensive approach to addressing these issues.” Members of GENTE, however, felt they weren’t being represented by Student Affairs.

“Dusty porter has not met with GENTE at all, has not outreached to GENTE in regards to this situation,” Trejo said.

This incident is not the first discussion of race relations on Tulane’s campus this year. The Tulane Black Student Union organized a “Call for Unity” in November to express dissatisfaction regarding the current state of inclusion for students of color on campus. The movement garnered support by more than 700 students, staff and faculty members.

Some, like Barber-Pierre, say they feel hopeful about the change that has occurred this academic year in terms of moving closer to institutional equity for students of color. She said she is optimistic for the future of Tulane’s race relations, seeing more change and action in the this year than she has in the past decade.

“I’ve seen some movement that I haven’t seen in quite a while when it comes to this issue,” Barber-Pierre said. “I’m optimistic when it comes to the institution’s ability to do a cultural shift in how we look at diversity inclusion. I think there are a lot of people who are supportive, these things are going to happen. You can’t think they wouldn’t happen when we’re in a highly politicized time period right now.”

Members of GENTE released an open letter in response to Porter’s statement. It can be found in a letter to the editor in The Hullabaloo’s Views section.

Emily Carmichael contributed to the reporting of this article.