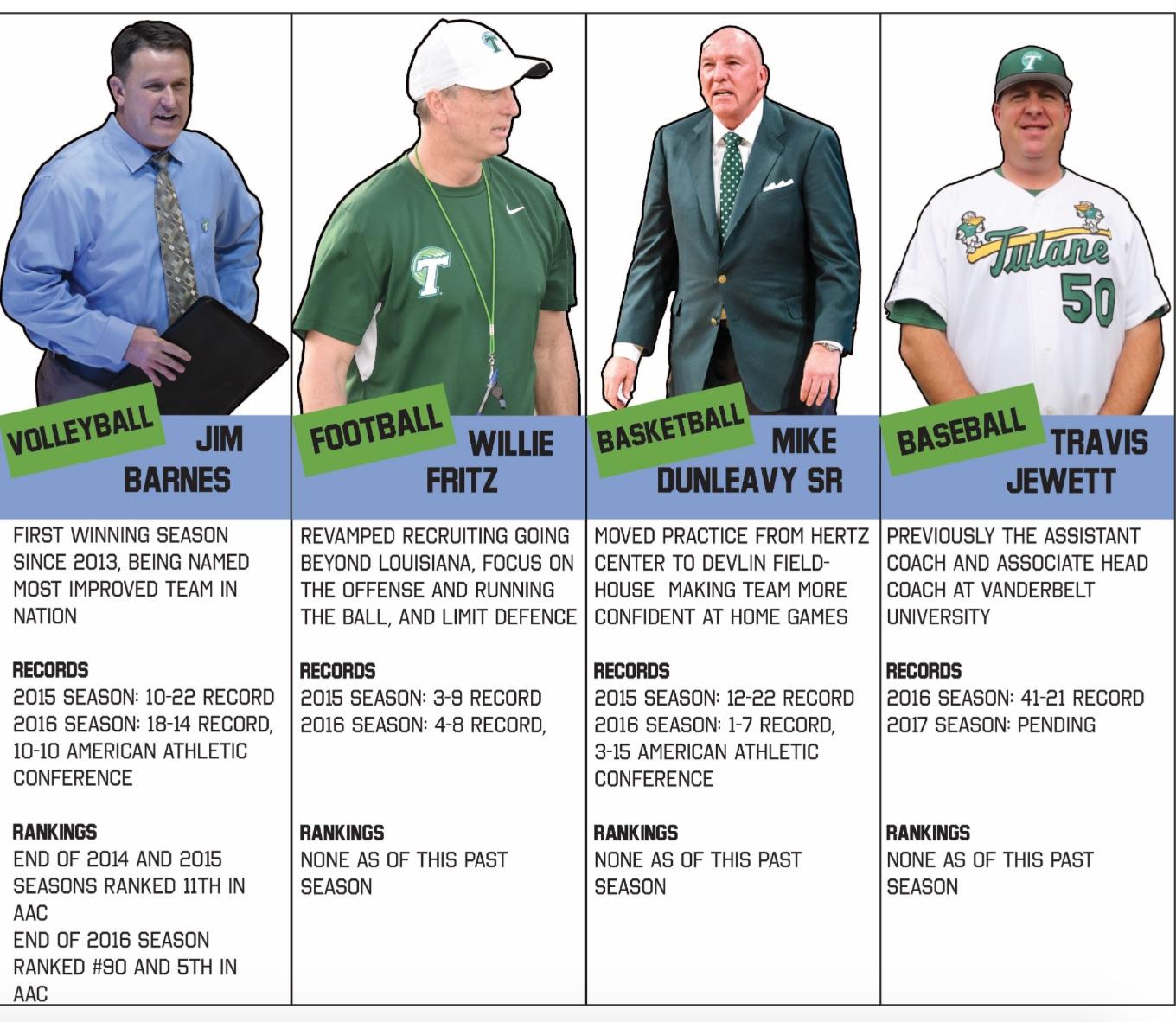 Before the pitcher steps on the mound or two giants leap for a mid-air battle, there are countless hours of preparation. Head coaches are not only responsible for obtaining a winning record but must also inspire players and aid in individual growth.

Tulane athletics used its desire to not only win but to foster a culture of success to revamp its entire program. Signs of progress are finally appearing.

The firing of former football head coach Curtis Johnson last year began the athletic overhaul process. Johnson led the Green Wave to its second 3-9 record in a row, sealing his fate in the 2015 season.

Athletic Director Troy Dannen announced Willie Fritz as the new head coach on Dec. 11, 2015. Fritz aims to expand recruiting beyond Louisiana, limiting defense, focusing on offense and running the ball. He seeks to bring his distinctive style to the Wave, which led to the creation of the hybrid triple option attack from both the shotgun and the pistol.

Improving on Johnson’s final record of 3-9, Fritz ended the 2016 season with a 4-8 record. While everyone had hoped for more, it is still a step in the right direction. Fritz re-established the defense by focusing on fundamentals and improving the team 45 ranks.

Being a powerhouse team takes more than winning games; it takes refining a culture and emphasizing player development. Fritz is working internally to resolve issues that prevent them from winning.

“Recently, we’ve been our own worst enemy,” Fritz said in an interview with Nola.com. “We have to get over ourselves first; then we can focus on our opponent. Right now we are beating ourselves.”

Though the record lacks massive improvements, Fritz has worked toward bonding the team as one unit rather than as individuals. The journey toward success is underway, one step at a time.

With news of former head coach Ed Conroy’s dismissal breaking during a conference game in March, new head coach Mike Dunleavy, Sr. entered at a tumultuous time. Returning players had a lot of adjusting to do with over half the roster fresh-faced and a new coaching staff.

After Conroy’s final season ending with a 12-22 record, athletics hoped Dunleavy, Sr. would turn those numbers around. Sadly, that has yet to happen with the current 2-7 record.

Dunleavy, Sr. moved practices from the Hertz Center to Devlin Fieldhouse to improve upon the 2-16 record the Wave achieved the past two years at home.

The season is still young, but at the end of the semester, there is a slight air of disappointment.

With the National Basketball Association experience Dunleavy, Sr. brings, he has fallen flat transferring that skill to the collegiate level. With more than half the season left to play, the team can prove successful. The players need to find more open shots and stop depending on only a handful of players.

With a young team and a handful of transfers, Dunleavy, Sr. has the potential to grow a strong team.

Currently, however, the question remains: did Dannen make the right move in firing Conroy?

The 2016 volleyball season has come to a close, and new head coach Jim Barnes made an incredible impact. Ending with a record of 18-14 overall and 10-10 in American Athletic Conference, volleyball improved from last season’s 10-22 and had its first winning season since 2013. At the season’s end, Barnes and his team became the most improved team in the nation.

While a turnaround like this can take several years, Barnes accomplished it in one season. The Green Wave broke into the top 100 early in the season after winning two of the four non-conference tournaments it participated in.

At the end of the season, Tulane ranked No. 90 nationally and No. 5 in the AAC after placing 11th the past two years. Barnes notched more conference and overall victories than in the past two years under former head coach Sinisa Momic.

Barnes proved how he is, by far, the strongest addition to Tulane athletics. Barnes set the bar for what athletics hoped to achieve with the coaching overhaul and the standard for all coaches.

The newest addition to the Green Wave family, Travis Jewett, will serve as the head baseball coach. Jewett replaces former head coach David Pierce, who accepted a job at the University of Texas at Austin.

Pierce, a major contributor to the success of baseball, lead the team to a 41-21 season last year. Jewett brings the same level of talent and experience as Pierce did. Jewett spent the last four seasons as an assistant coach and associate head coach at Vanderbilt University helping build the program into a national powerhouse.

This year’s season consists of 56 games, with 35 played at Tulane’s Greer Field. The season starts at 6:30 p.m. on Feb. 17 at Greer Field against Army West Point. With a team full of experienced and talented players, a history of success and a new coach with an impressive track record, Jewett and the Green Wave baseball team will not only succeed but improve.