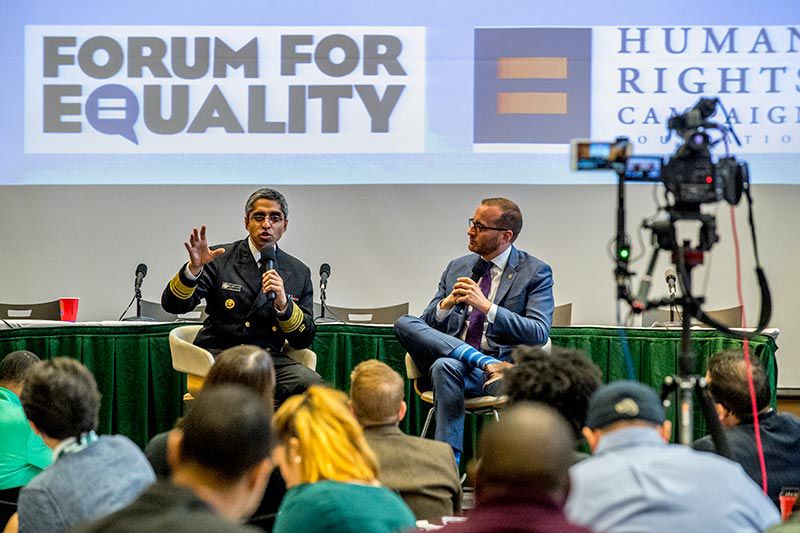 Health care experts and activists from across the country gathered in the Lavin-Bernick Center for University Life to discuss LGBTQ+ life and issues last Thursday on World AIDS Day.

The White House World AIDS Day LGBT Regional Summit in New Orleans was co-hosted by The U.S. Department of Health and Human Services and by Forum For Equality, a Louisiana advocacy group.

The White House hosts these events in partnership with other organizations to increase awareness of federal services available to the LGBTQ+ community and create a network for LGBTQ+ allies.

The summit featured a series of panels on topics such as “Coming Out in the South,” “Tools in HIV Prevention,” and “Being Queer in Faith Communities.” Experts in LGBTQ+ issues, activists, health care professionals and student leaders hosted these panels.

Murthy has been involved in HIV activism since his freshman year at Harvard University. He and his sister co-founded VISIONS Worldwide, an organization focusing on HIV/AIDS education in India and The United States. He stressed the importance of youth advocacy.

Murthy and his sister spent a summer after high school in India and realized that HIV was a prominent problem there, but also that there was a lot of denial surrounding the subject.

“We asked ourselves…’Who is going to step up and help inform and educate communities so they know how to protect themselves?’ and we looked in the mirror at some point, and we said ‘Well why not youth?’, a large untapped resource in India at that time and certainly in the U.S. as well,” Murthy said.

Junior Jett Trudeau, who attended the summit, said he is proud of his university and the current White House administration for prioritizing these issues.

“I think it’s incredible that The White House has picked Tulane to organize this event,” Trudeau said. “It’s incredibly important that we host summits like these and that we have them here at Tulane and that we foster this community that is engaged with LGBT issues…”

Caroline Scott, president of The Queer Student Alliance at Tulane, said she was glad to see the unification LGBTQ+ activism at all levels.

“I think that this event was extremely important because it provided an opportunity for members of our community… to hear from government officials who can often seem far-off and unattached, yet are fighting for LGBTQ rights on the national level every day,” Scott said. “…It was incredible for them to come to Tulane, especially given our previous and current groundbreaking research with HIV/AIDS, and discuss this issue that continues to be an issue, especially for gay and bisexual men.”

Scott spoke on the panel “Coming Out in the South and Supporting LGBTQ Youth,” with other activists as well as a representative from the U.S. Department of Health and Human Services.

Scott focused on the significance that race has on LGBTQ+ issues in the South.

“Especially in New Orleans, we have a very vibrant and large Black community,” Scott said. “However, in Louisiana, we have the highest incarceration rate in the world. LGBTQ people don’t escape this; in fact, LGBTQ people and people living with HIV/AIDS are criminalized at extremely high rates, and those rates go up exponentially if one is a person of color.”

Tara Gary, an LGBTQ+ outreach coordinator with Navigators for a Healthy Louisiana, provided information and answered questions at the event.

“Today’s summit was a great opportunity for our Navigators for a Healthy Louisiana LGBT Enrollment Project to talk about our commitment to connecting Louisiana’s LGBT community to health insurance options under the Affordable Care Act,” Gary said.

The event closed with a panel of local Louisiana LGBTQ+ leaders and a group of national leaders, along with Red Tremmel, director of the Office for Gender and Sexual Diversity here at Tulane.