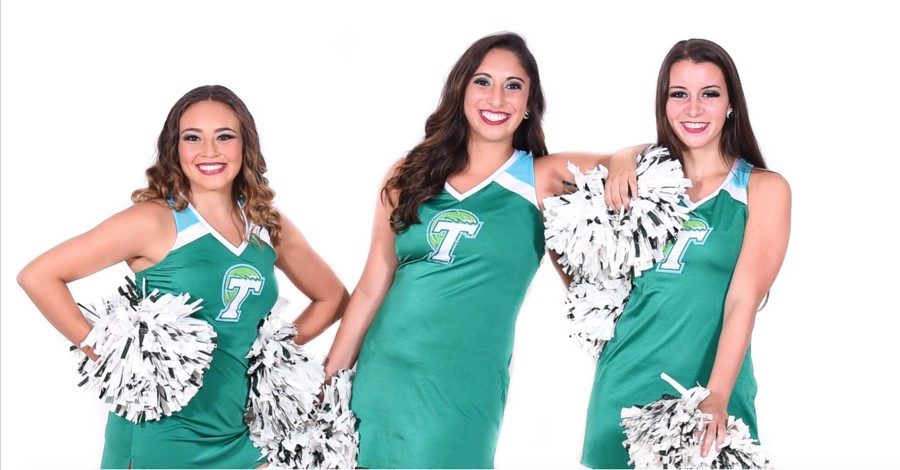 The co-captains of the Tulane Shockwave dance team, Eleyna Langley, Olivia Bancroft and Lauren Hymel, are this week’s #WaveCrushWednesday. Shockwave performs at every football and basketball game and joins the teams on their away trips and tournaments. Outside of Tulane, Shockwave also participates in events around New Orleans and leads several parades during Mardi Gras. The Sports section chose Langley, Bancroft and Hymel for their tireless efforts in bringing energy and spirit into Tulane Athletics.

What goes into making your dances?

Langley: When making dances, I think about the team and some skills that I would like to highlight, as well as whether it’s football or basketball season. In my opinion, football season involves more visual aspects be included in a dance, rather than basketball season where I would incorporate more technique such as turns. I also consider the effect that different music would have on the crowd and their engagement in the dance, which contributes to what I choose to choreograph!

Do you have any dances that you are working on as of this moment?

Hymel: As of this moment, our main focus is preparing for the Mardi Gras parades. Therefore, we are practicing marching with the Tulane band. As they play their music, we have choreographed movements to each song as a way to get the crowd involved and excited as we march down the streets of the parade. These dances are short and fun, but it requires lots of practice because the parades last for several hours, so keeping our energy up is very important!

What has been your favorite performance that you and the team have done and why?

Bancroft: My favorite performance on this team was to the song “Rather Be” my freshman year. I was really excited for this dance because I got to do a flexibility trick right at the very beginning and it was a pom dance, which is my favorite style. Unfortunately, when we performed it at the football game, one of my poms blew away in the wind while I was doing my trick! But, it turned out great still, and I loved the dance anyways!

Your website says you are the leaders of the Mardi Gras Parades. What is it like to experience that?

Langley: It’s a really enjoyable experience! I love walking directly behind the Tulane banner, seeing everyone’s faces as we walk past, and dancing our hearts out for the crowds! It’s amazing to think of all of the people that we’re passing by and how important it is to dance as strongly at the end of the parade as we do in the beginning.

By being a member of Shockwave, how do you feel connected to the school and its students?

Hymel: As a member on Shockwave, I feel very in touch with Tulane and its students and different organizations on campus. One of the main reasons I had for joining the team was to become more involved, and this experience has certainly given that to me. I have been given the opportunity to cheer on athletes of several different sports, collaborate with other organizations such as cheer and the Tulane band, as well as interact with many supportive fans. Through these opportunities, I have found some of my best friends and I will forever be thankful for that. This team is all about embracing Tulane in each and every way … supporting other teams and organizations, rallying up the fans, and uniting everyone under one cause—representing the Green Wave!

When you dance for the crowds, both young and old, at Tulane, what do you feel?

Bancroft: I love dancing for the crowds at Tulane because you can feel the energy and excitement! There’s nothing better than hearing “Are you ready?” and hearing everyone break out into the “hullabaloo.” It makes the hours of practice worth it when the audience tells our coach how great we looked or a video of a dance receives thousands of views. We feel like we are making an impact on the Tulane fans and that feels amazing. I am so blessed to have this opportunity to dance at this school and on this team.