A resident of New Orleans is three times more likely to be killed than someone living in a similarly sized U.S. city.

Many of these killings occur in impoverished areas often affected by the drug trade.

“When you are working at McDonald’s making $7 an hour, and you can go make $500 in an evening selling drugs, that’s a big problem,” Jennifer Dupree, New Orleans Police Department Second District lieutenant, said.

For some Tulane students, these trends may seem far removed from the university’s Uptown campus. Tania Tetlow, former federal prosecutor and current Tulane chief of staff, has seen how this misconception affects both the Tulane and black communities.

“In a city like New Orleans, where the black male unemployment rate hovers around 50 percent, you’re going to necessarily have a whole lot of folks working in the black market economy of the drug trade,” Tetlow, also a former director of the Domestic Violence Clinic at Tulane Law School, said. “… It’s easy to judge people for [being involved in the drug trade], but I think that every Tulane student who purchases those drugs needs to think about their complicity in that violence.”

Dupree said she believes Tulane students can play a role in violent crimes related to drugs, especially when they enter territories and neighborhoods with which they are unfamiliar.

According to Tulane University Police Department Superintendent Jon Barnwell, students put themselves and those around them at risk when they purchase illegal drugs. When students are victims of crimes, “nine times out of 10, it has to do with them buying drugs,” Dupree said. 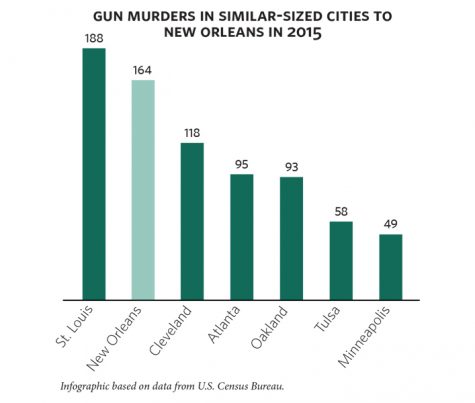 Freshman Charlotte Pearson, an alumna of New Orleans’ Ben Franklin High School, said she believes students have a tendency to think that Tulane is not a part of the violent culture in New Orleans and thus engage in reckless behavior.

“But that really makes us more of a target for crimes such as armed robberies and possible shootings,” Pearson said.

Twenty-six percent of people ages 18-29 own a firearm in the United States, according to the Pew Research Center, and some Tulane students are part of that statistic.

“I know students … who have guns, and they’ll take them out when they’re drunk or on drugs and that’s a little bit more concerning,” junior Margot Palandjian said.

Not all students feel invincible when it comes to living in a city with high rates of gun violence. Junior Caroline Cort said she knew students that have “had guns held to their face” and feels “it is daunting for students here knowing that so many people are armed.”

The impacts of gun violence reached Tulane when Tiffany Thomas, a Sodexo employee and Tulane community member, was shot and killed in New Orleans East in January.

Though Tulane students may feel some vulnerability to gun violence, Tulane and TUPD attempt to ensure that students are prepared for the statistically unlikely event of gun violence on or near campus. Dupree said that in her five years in the Second District, which encompasses the Carrollton and Uptown communities, collaborations between TUPD and NOPD have significantly reduced rates of armed robberies near campus. Barnwell said tactics for preparing students for cases of gun violence include active shooter training, Crime Alerts and TUPD-sponsored classes.

Despite occasional incidents, the gun violence prevalent in New Orleans does not affect Tulane students in the same way it affects other communities in the city, mostly because of the Uptown area’s demographics.

“On the one hand, I want every student to be cautious and wary,” Tetlow said. “On the other hand, I think it’s probably important for our students to understand that, compared to a whole lot of folks in this city, they are vastly less vulnerable to gun violence …”

Vice President for Student Affairs Dusty Porter said he agrees that students generally do not see the effects of gun violence on campus since it largely impacts black communities.

The issue of gun violence has not gone unnoticed by city officials. On Tuesday, NOPD launched the Tactical Intelligence Gathering and Enforcement Response, or TIGER unit, which deploys detectives to investigate armed robberies in the city. NOPD also plans to implement new systems and technology allowing for proactive patrolling.

New Orleans Mayor Mitch Landrieu launched the NOLA for Life campaign in 2012, which is a city-wide initiative to prevent killings and violence in the city. To date, the foundation has raised more than $1.3 million.

“There has been a 22 percent reduction in the murder rate since [NOLA for Life’s] launch,” Landrieu’s Press Secretary Erin V. Burns said. “… Still, there is progress to be made, and [it] will require a sustained, long-term effort.”

NOLA for Life is not alone in its mission to combat gun violence. Organizations such as Silence is Violence and Moms Demand Action for Gun Sense in America address issues of gun violence in New Orleans, tackling subjects such as conflict resolution, advocacy, education and gun law reform.

“Nationally, seven American children or teens are shot and killed every day,” MDA Education Lead Krystal Allen said. “This can never be acceptable … Change must take place both at the grassroots level and … within more systematic and institutional means of reform.”

MDA aims to support victims of gun violence, increase awareness of the problem and advocate for action amongst companies, educational institutions and state and federal legislation. 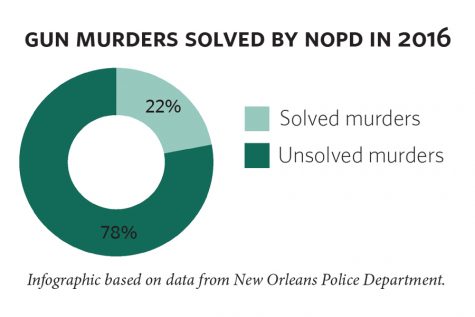 Despite efforts by these organizations, gun violence persists in New Orleans with 15 people killed in February. Silence is Violence Executive Director Tamara Jackson said she believes this is aggravated by a visibility deficit advocacy groups face within the community.

“Usually people are not familiar with Silence is Violence until they become victims or until their family members become victims,” Jackson said. “So I think on behalf of the organizations, there needs to be more community engagement.”

Silence is Violence offers logistical and supportive services to victims of gun violence and their families in New Orleans. It works to ensure that victims know their rights and can navigate the criminal justice processes.

Cort, who has worked with MDA and Stop Handgun Violence, said she felt it was disheartening to see gun violence continue to persist within the city.

Experts, statistics and community stakeholders suggest that the prominence of gun violence in New Orleans stems from other complex issues of society.

“I think that gun violence is the worst manifestation of much more profound social problems and unfairness,” Tetlow said. “I hope that … at a place like Tulane, we can help our students understand the complexity of the causes, and as much as it frightens all of us, understand that the people suffering the most from it have far fewer resources than we do.”

Brandi Doyal contributed to the reporting of this article.