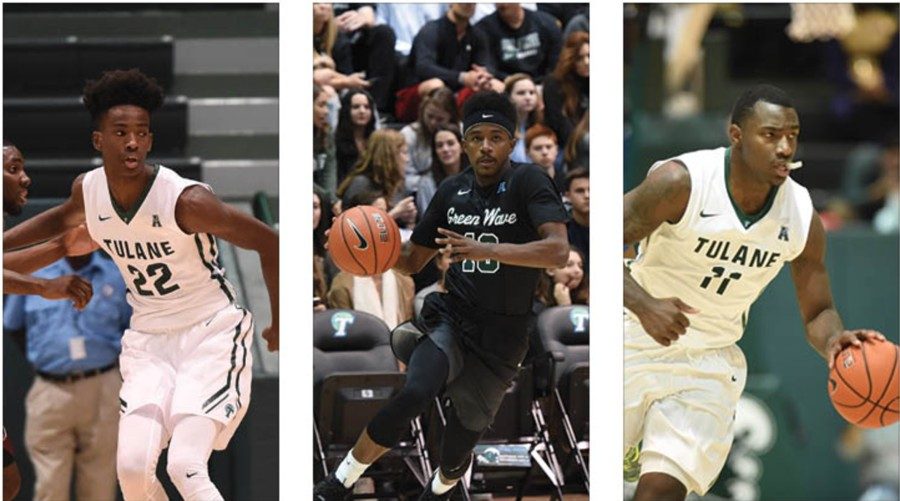 Even though it means riding the bench for a season, student-athletes often transfer. Their reasons range from changes in coaching staff to a lack of playing time.

Transferring is most common in basketball, which has more than double those of football and triple those of baseball. According to Forbes magazine, the men’s basketball transfer rate around the country is 36 percent greater than the overall student-athlete population. Around 10 percent of the 4,433 Division I men’s basketball scholarships offered by the NCAA are shuffled through the transfer process.

Tulane men’s basketball is no exception to this rule. In the past five seasons, 20 players have left the Green Wave.

Starting with a major exodus in the 2012-13 season, a trend began. At the end of that season, forward Josh Davis, guard Ricky Tarrant, center Josh Birchfield, guard Raanthony Sanders, forward Marc Norelia, and forward and center Lotanna Nwogbo all announced that they were leaving the program, leaving many holes on the roster.

With a new season and faces in the next season, the program hoped to rebuild. After a 17-17, 8-8 American Athletic Conference finish, the Wave still could not retain its roster. While the emigration was not as significant as the year before, forward Mikael Herbert, guard Cole Currie and center Ray Barreno hung up their Tulane jerseys for good.

The transfers did not stop. In the 2014-15 season, another round of players left the school. With five transfers — the second largest number in five years — requesting formal release from the program, former head coach Ed Conroy had to revive the team once again.

Vital players such as guard Keith Pinckney, guard Jonathan Stark, center Aaron Liberman, forward Payton Henson and forward and guard Josh Hearlihy have put their Tulane days behind them, leaving fans wondering why so many players transfer at the conclusion of each season.

That season also saw a coaching change when Mike Dunleavy, Sr. was hired to replace Conroy. Dunleavy was chosen for his ability to teach and his reputation in strategic planning, according to athletic director Dannen.

With a new coaching staff and several new incoming players, fans hoped that in the 2016-17 season, the Green Wave would retain players and improve as a team.

“Look, we’re going to be good,” Dunleavy said in an interview with The New York Times. “I’m not worried about that part of it. It’s just a matter of how long it takes. And I feel like it’ll happen sooner than people think it’ll happen.”

A season record of 6-25, 3-15 AAC thwarted the possibility of becoming champions this season. The illusion further shattered with the announcements on Twitter of sophomore guards Von Julien and Kain Harris, and freshman forward Darian Jones all transferring.

Dunleavy’s goal of turning the program around, as stated in a March 2016 press conference, was not actualized this season, as seen in its overall record — the worst in recent years.

“I would like to take this time to say I thank everyone at Tulane, especially my family, coaches and the wonderful fans of Tulane for their support,” Julien tweeted. “I’ll be transferring, these past two years ha[ve] taught me a lot of life lessons both on and off the court. I want to [say] thanks again [to] everyone!” 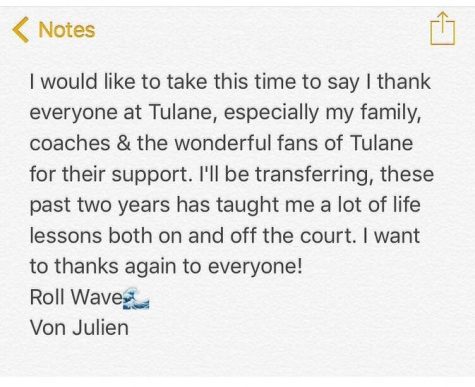 Coming in as a three-star recruit from Chicago, Harris played in 33 games with two starts in the 2015-16 season. This season, Harris played in 33 games, averaging 9.1 points and 1.7 rebounds on 38 percent shooting from the field. Harris was one of the top scoring options off the bench for the Green Wave. He averaged 18 points in the first five games against conference teams. Throughout the season, however, his role decreased significantly; in the final 13 games, he averaged 4.7 points.

“First, I will like to thank Tulane University for embracing me during my two years here,” Harris tweeted. “I would like to thank the coaching staff for granting me the opportunity to play basketball and be a student at such a nice university. I’m forever grateful [for] the opportunity I’ve had at Tulane, but I’ve decided to transfer from Tulane and explore my options.” 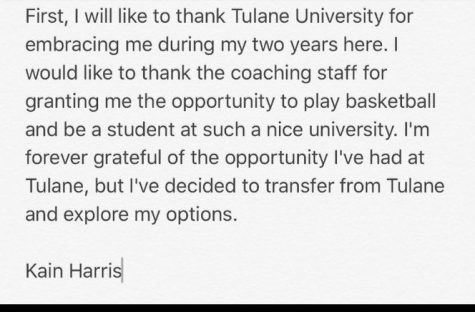 For Jones, the most recent player to announce his transfer, basketball runs in the family. Younger brother to Damian Jones, first round 2016 draft pick by the Golden State Warriors, Jones was a two-year letter winner at Brusly High School in Brusly, Louisiana. In his first — and last — season with the Wave, he entered 10 games and played a high of four minutes.

“I am announcing that I will be transferring from Tulane University,” Jones tweeted. “I would like to thank all of Tulane, my family and the coaches that have supported me throughout the year. Being at Tulane has taught me a lot and has put me through a lot of great experiences.” 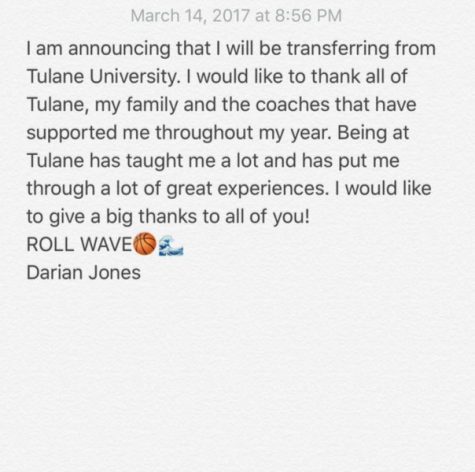 According to Athletic Strategic Communications, the three players have not yet been granted formal releases from their scholarships, but with their likely departures, and center Ryan Smith and guard Malik Morgan graduating, Dunleavy and his staff will pursue other options for next season, as well as cultivate the remaining players.

When asked about the state of the program, an email from Athletic Strategic Communications said “despite what’s out there on social media, Coach Dunleavy is not currently available for comment on the subject of players not returning next season.”

What is known, however, is that Buay Koka and Bul Ajan both hailing from Elizabeth, New Jersey, will join the Green Wave next season.

With the possibility of more players announcing their transfer in upcoming weeks, the men’s basketball program is up in the air, in a state of reformation once again.