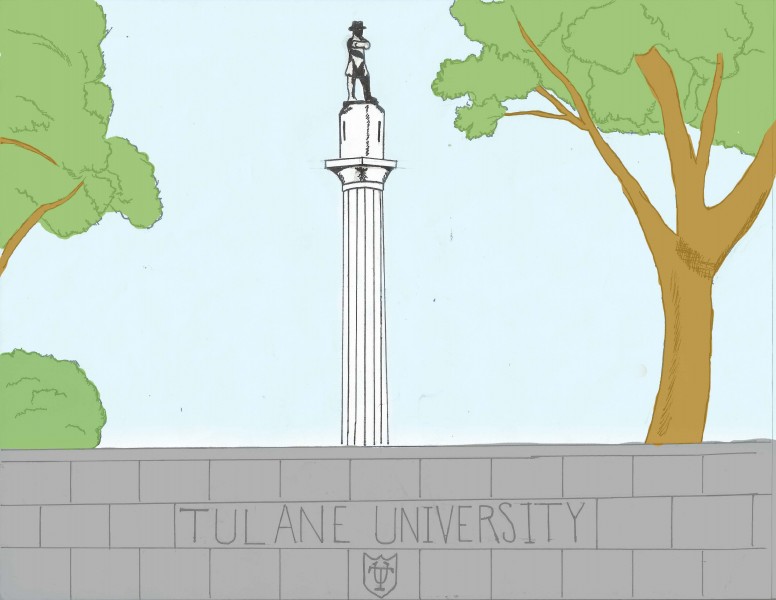 Tulane University can draw its roots back to 1834, more than a century before the move to desegregate schools in the United States. The university’s past is closely intertwined with the Confederacy and slavery. Seeing Confederate monuments scattered across Tulane’s campus symbolizes for many students of color that Tulane was not built for them.

“[It] only acts as a reminder of the oppression of blacks in the South and the support of white supremacy,” freshman Imani Evans said.

From educational institutions like Georgetown University to Take ‘Em Down NOLA, which pushes to remove Confederate monuments in New Orleans, there have been initiatives to remove and remedy the effects of white supremacist symbols.

Take ‘Em Down NOLA works not only to take down statues of historical figures such as Confederate General Robert E. Lee and Confederate President Jefferson Davis but also to change the names of local schools and streets. On its website, the organization lists Tulane as one of these monuments.

Tulane sophomore Sam Barton, a Take ‘Em Down NOLA community organizer, is hopeful about the increase in community education about the potential effects of Confederate monuments.

“I think it’s easy for most Tulane students to see that honoring these monuments — despite their history — is perceived as racist and oppressive by a lot of people who live and work in this community,” Barton said.

Though the prominence of the national conversation on Confederate monuments is evident in the media, the question of what is considered to be a symbol of the Old South remains contentious.

For many students of color on Tulane’s campus, the names of the academic buildings themselves serve as reminders of the university’s ties to the Confederacy.

Randall Lee Gibson, the namesake of Gibson Hall, was a general in the Confederate Army. Gibson was instrumental in establishing the university seen today and moving it from a public to a private school.

“… Gibson was the first president of the Board of Administrators of the Tulane Educational Fund,” Tulane University Archivist Ann Case said. “The fact that he was a general in the Confederate Army, and, therefore, a Confederate symbol, doesn’t even enter my mind when I think of Gibson Hall.”

Gibson’s contributions, however, go beyond president of the board and point more towards his beliefs.

According to Media NOLA, “Gibson […] advised Tulane to change his bequest from serving just the ‘young men of the city of New Orleans’ to ‘young white persons’ of New Orleans.”

This, on one hand, opened the door to white women but still left no room for students of color.

While the intent behind bestowing a building in his name might not be problematic, Evan believes the effects centuries later are hard to miss.

“Symbols in public spaces are supposed to represent who we are as people and what we value and stand for, so I think they send a negative message about what Tulane values and who they see as heroes,” Evans said.

The symbols on Tulane’s campus go beyond Gibson Hall.

For many students who know this history, there is a disparity between the message of inclusivity Tulane sends in flyers and emails and the environment students face on campus. As students of color walk the campus day after day, they come in and out of classrooms with the names and memorabilia of men who never valued their existence.

“The motto of Tulane University is ‘Non sibi, sed suis,’ which means ‘Not for one’s self, but for one’s own,’ Barton said. “If our institution is serious about diverging its mission from that of its founder, who wanted to promote education for young white men, our administration needs to be more accountable, taking active measures rather than touting rhetoric.”