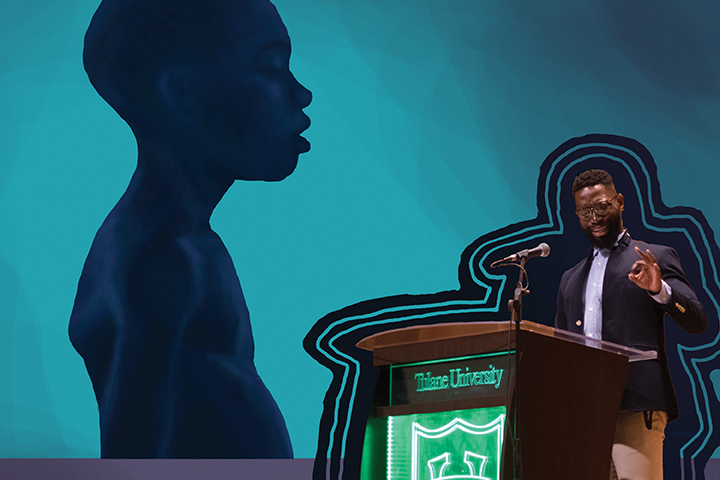 In February, “Moonlight” became the first film in the 89 years of the Academy of Motion Picture Arts and Sciences to both receive the Best Picture Oscar and feature an entirely black cast while focusing on LGBTQ+ characters.

One movie does not compensate for the systematic oppression in society and on campus. “Moonlight” instead acts as a catalyst for a conversation about issues in our society. The film works to present those society labels as atypical, give them names and faces, and highlight their humanity.

In February, “Moonlight” became the first film in the 89 years of the Academy of Motion Picture Arts and Sciences to both receive the Best Picture Oscar and feature an entirely black cast while focusing on LGBTQ+ characters.

Tarell Alvin McCraney, the playwright behind the film’s inspiration, discussed his relationship with his craft through the impacts of identity, oppression, visibility and technology on theater Tuesday night at a Tulane University Campus Programming-sponsored lecture in McAlister Auditorium.

“It carves out a space to honor the complex narratives of people’s lives beyond the stereotypes forced on them,” Grace Leyrer said.

The play “In Moonlight Black Boys Look Blue” was shelved for more than a decade before it became the inspiration for “Moonlight.” Many supporters expressed feeling the film’s success highlights those who felt forgotten by society and proved their stories are worth telling.

“In Moonlight Black Boys Look Blue” centered on McCraney’s upbringing in the inner city of Miami. Taking place through the 1980s into the early 2000s, the film follows Chiron, the play’s gay black protagonist, through his personal journey to navigate his sexual, racial and gender identities.

“Moonlight” provides an unorthodox coming out story, a companion for those whose realities differ from lives shown in sitcoms and cinemas.

McCraney’s characters act as the voices for those who feel pushed to the margins of society by the impact of hypermasculinity, racism and classism.

“It gives space for black boys to explore what sexuality and masculinity individually is for them,” junior Lex Bourguignon said.

For some students, the film served as an eye-opener for those who have not experienced the black queer culture depicted in the film.

Tulane senior Grace Leyrer said they felt that though “Moonlight” did not necessarily reflect their life experience, it humanized the narrative of being queer and black in a way mainstream media oftentimes neglects.

“I think ‘Moonlight’ was significant because it humanizes characters that are often left out of or demonized in mainstream media, especially black LGBT youth,” Leyrer said. “It carves out a space to honor the complex narratives of people’s lives beyond the stereotypes forced on them.”

McCraney shared that he wrote the play and screenplay for the film to provide hope for every “young, gay black boy,” so that they “could stand together.”

During the lecture, McCraney read an excerpt from “The Breach,” a set of three plays he wrote that focus on the drowning of New Orleans as a result of Hurricane Katrina.

One of the plays in the set tells the story of Severance, the protagonist, as he spends countless days waiting on the roof after the hurricane with his sister and grandfather.

Bourguignon said that the excerpt was the most powerful part of the lecture.

“Not only did [the play] feel familiar in the sense of us physically being in New Orleans and being able to understand the extent of the setting he was trying to set but also in a sense of understanding the stigma and fear that often accompanies exploration of sexuality within the black community in the South,” Bourguignon said. “The pieces felt very raw and easily relatable, allowing them to really infiltrate the audience.”

“Moonlight” moves away from typical Academy subject matter and manages to combat the diversity-related criticism the Academy has faced. McCraney, however, warned against considering these issues fixed when some began to declare a new “post-racial” Hollywood following the film’s success.

“There will always be people who cling to easy moments,” McCraney said. “Representation is more than a five-minute snapshot of someone’s life.”