Do you know what it means to miss New Orleans? 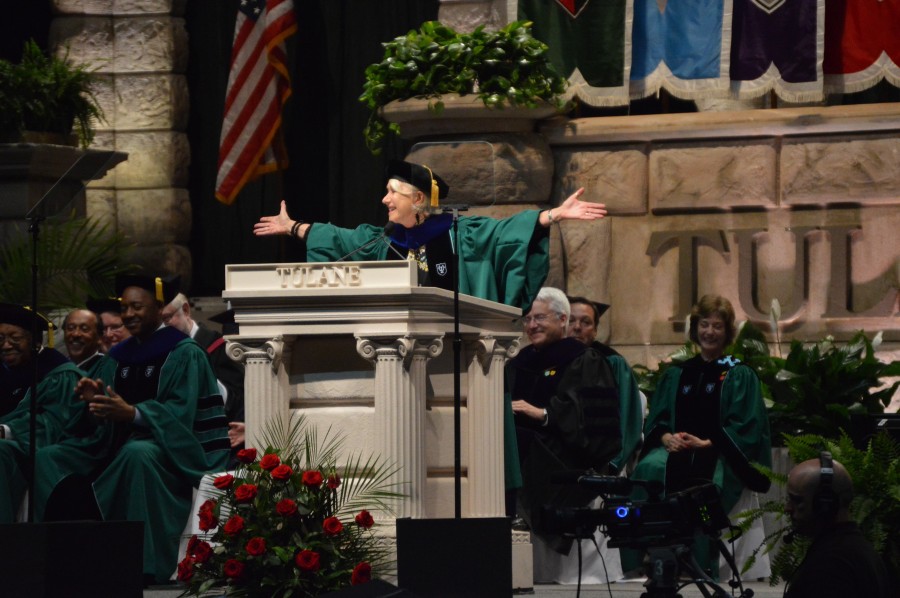 Helen Mirren delivers the keynote address at the unified commencement ceremony May 20 at the Superdome.

Tulane University’s Unified Commencement Ceremony on May 20 brought second lines, jazz and words of wisdom to the Mercedes-Benz Superdome.

On the day of commencement, Tulane students, parents, faculty, staff and community members made their way to the Superdome to say congratulations and goodbye to the Class of 2017 with a proper New Orleans send-off. The Unified Commencement Ceremony honors graduates from all of Tulane’s schools with traditional pomp and circumstance, a conferral of degrees and addresses from the university president, the student speaker and the keynote speaker.

At this year’s Unified Ceremony, the graduates received advice to carry with them across both the country and the world. The overarching theme of finding one’s way back to Tulane and New Orleans echoed through the sentiments expressed by this year’s speakers.

Tulane President Michael Fitts spoke first and said that the graduates’ time in New Orleans would have a lasting impact on their futures.

“New Orleans is unrelentingly creative. It is daring and quirky and magical,” Fitts said. “New Orleans will be a part of you wherever you end up. … But not only that, you’ll remember the ways that your own service in the city has transformed you.”

Fitts also commended the Class of 2017 on the strides its members have already taken toward improving the community around them.

Following Fitts’s address, the spotlight fell on Tulane’s 2017 student speaker, Corley Miller, and keynote speaker, celebrated actress and humanitarian Helen Mirren. In their speeches, both recounted their experiences at Tulane and in the New Orleans community.

Miller, a graduating senior, was inspired by Malcolm Gladwell’s 10,000-hour rule when writing the student speech, which states that 10,000 hours of working at something will make you a master of that subject. Miller spoke on how the graduates’ college careers allowed them to become a master of a variety of different skills, including college itself, and said they should apply lessons learned from Tulane to their future endeavors.

Following Miller’s speech, Helen Mirren, who received an honorary degree from Tulane this year,  took the stage for the keynote address. Among the personal anecdotes and pieces of wisdom she shared with the graduates, Mirren also took time to reflect on New Orleans as a multi-faceted cultural center.

“New Orleans is my spiritual, my artistic home …,” Mirren said. “It’s funky, it’s beautiful, it’s raunchy, it’s sophisticated, it’s elegant, it’s raw and imaginative and witty and cultured and violent and sleepy. Believe me, long after you graduate, New Orleans will remain a part of your soul.”

After the ceremony, Mirren expanded on the city’s ability to enhance the college experience for students.

“I think New Orleans is a very special place for the whole college experience … in spite of all the distractions … it’s a miracle,” Mirren said. “You learn how to overcome those distractions, and you’ll then realize that you can do anything you put your mind, your work and your heart into.”

Following Mirren’s address Dr. Michael White’s Original Liberty Jazz Band serenaded the Class of 2017 with its rendition of “Do You Know What It Means To Miss New Orleans?” accompanied by Topsy Chapman and her daughter, Master of Liberal Arts graduate Yolanda Windsay.

The ceremony concluded with Green Envy’s rendition of the Alma Mater, a pyrotechnics display with olive and blue streamers and graduates receiving decorated umbrellas emblazoned with the Tulane crest.

Graduating senior Scott Merritt said he loved both the music and the speakers and found the ceremony to be overwhelming in the best way possible.

With its nod to the culture of New Orleans and a focus on hope for the future, the 2017 Unified Commencement Ceremony offered graduating students a way to conclude their years at Tulane. Fitts said the experiences and memories graduates have made in the city have prepared them to spread the spirit of New Orleans beyond Tulane’s gates.

“In these experiences, you learn the ultimate leadership skills,” Fitts said. “How to listen more than talk, how to be humble, how to live the Tulane motto: not to live for one’s self, but for one’s own.”