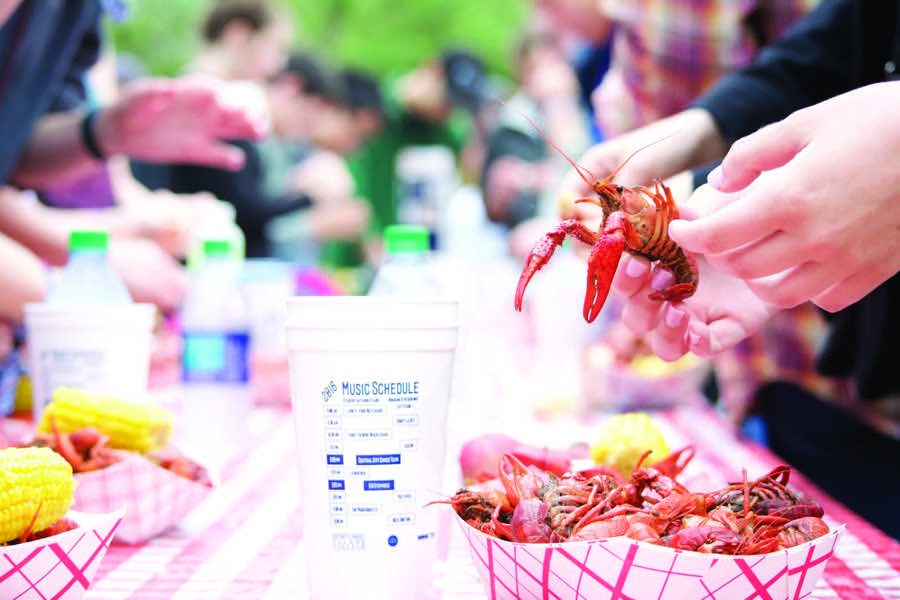 Mirroring the festive charm of New Orleans, Tulane’s various student-run organizations set up different events that make year-round celebration an integral part of our campus culture. Whether cheering in the stands during the homecoming game or jamming to the autotune artistry of T-Pain in Devlin Fieldhouse, students had a good time, so we’ve compiled a roundup of Arcade’s top 10 picks for the best events of the 2016-17 school year.

Organized by Tulane students and for the community, Crawfest mixes live music, local food and art vendors and over 10 tons of crawfish to create an annual celebration unlike any other. This past year’s lineup included Moon Taxi, RDGLDGRN and student band The Bummers

“There’s NO pLAce like homecoming” was last year’s theme, reminiscent of “The Wizard of Oz” and just as thrilling. Click your Hunter rain boots together three times and land yourself within a whirlwind of activities spanning over the course of one week: carnival rides, food trucks, a mechanical bull, and of course, the homecoming football game.

3. “A Lecture with Mark Ruffalo”

Academy Award nominated actor (and the most recent Hulk of “The Avengers” franchise) paid Tulane a visit to talk about environmentalism. His lecture coincided with the timing of the heights of the Dakota Access Pipeline protests, which drove much of the conversation. Ruffalo’s speech was timely, energetic and above all, raw.

Using the narrative style that the Vagina Monologues popularized, this student-created play expands its scope to encompass all female-identifying and gender-nonconforming people. With a cast of over 100 students, the show shined a spotlight on gendered oppression and started a dialogue within the Tulane community, while inviting all to participate with its message of inclusion and accessibility.

They came. They saw. They shook their tuchuses. Hillel’s sponsored Nice Jewish Boy pageant saw 15 men compete for the high prize of the golden yarmulke, singing, lip-syncing and doing an interpretive dance involving a giant inflatable ball and some tutus. The boys vied for the crown to the amusement of an enthusiastic crowd, while celebrating and satirizing Jewish culture.

Thousands of students packed into Devlin Fieldhouse to see opener pop singer Daya, and later, Rhythm and Blues singer Kehlani perform live. Kehlani performed hit singles “You Should Be Here” and “Gangsta,” which appeared on the “Suicide Squad” soundtrack, and left students impressed by her show and anticipating Tulane’s Fall concerts to come.

In a celebration of destigmatizing mental health, the National Alliance on Mental Illness at Tulane organized clubs across campus and musical performance groups to congregate on the Bruff Quadrangle and send a clear message to the Tulane student body: it’s OK to not be OK.

One of America’s poet laureates and authors of such esteemed classics like “I’m ‘N Luv (Wit a Stripper)” and “Booty Wurk (One Cheek at a Time),” Faheem Rashad Najm, sometimes referred to as T-Pain, took over Devlin Fieldhouse for Tulane’s spring concert. What followed was a night brimming with cultural exploration, expert artistry and perhaps some twerking.