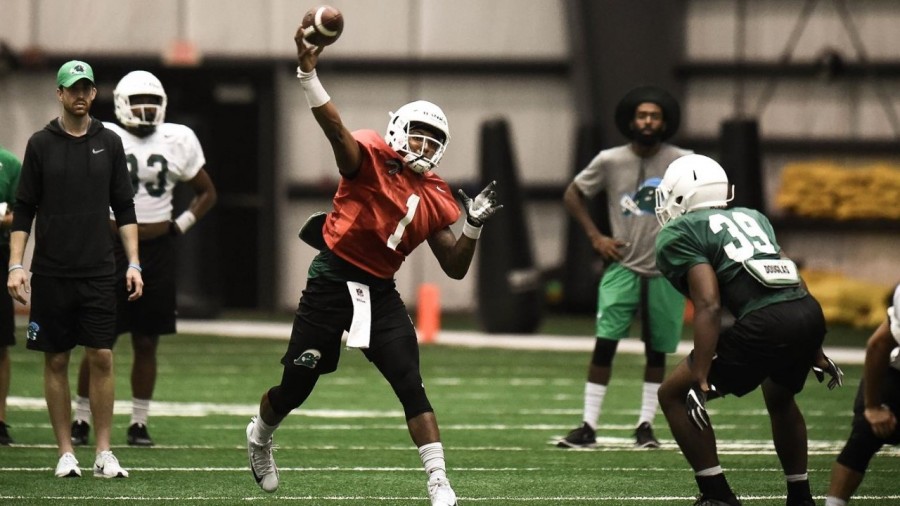 The toughest play of the season: Tulane takes new approach to recruitment

An article published in The Hullabaloo last week about Coach Willie Fritz ended with the following two sentences:

Unfortunately, there was no room in that article to mention that battling the odds is what Fritz is known for. Prior to coaching at Tulane, Fritz coached at Georgia Southern, a school that was barely part of the Football Bowl Subdivision. Georgia Southern became part of the FBS in 2014, the same year Fritz began coaching.

In the 2013 season, before Fritz arrived, the team’s recruiting class ranked 135th in the nation. Schools that were not making the jump to FBS, such as South Carolina State and Tennessee Tech, had higher-ranked recruiting classes. The team only brought in seven scholarship players. In Fritz’s last recruiting year, 2015, the team brought in 21 scholarship players and ranked 85th. Tulane, which has been in the FBS since it’s founding, had a lower-ranked recruiting class of 91st. The turnaround for GSU was substantial for a program which had only just become eligible for its first bowl game in its second FBS season.

Afterwards, Tulane hired Fritz. Tulane’s 2016 recruiting class, which had mostly been put together before Fritz’s hiring, was ranked 97th. The 2017 class dropped to 111th. But as a coach, Fritz has faced many concerning trends. The 2018 recruiting class is currently ranked 74th, with already five more 3-star prospects than the school signed last year. This change comes with time to spare — there are many more players expected to sign with the team before National Signing Day on Feb. 7, 2018.

Jonathan Banks, who signed with Tulane out of junior college last year and will start at quarterback, provides a better insight on how Fritz and the Tulane coaching staff managed such a quick turnaround.

“Coach Fritz and the staff did a great job recruiting. I didn’t really know about Tulane at first, but they were the first school to jump on me,” Banks said.

Banks played for Independence Community College in Kansas, where he helped lead the team to its first winning record in years. He was recruited by other D1 programs, including Texas State, which would have put him closer to his hometown of Houston, but the loyalty Fritz and staff showed him during the recruiting process lured Banks in.

“They kept their word with me, so I kept my word with them,” Banks said.

Banks wasn’t the only big name from last year’s class, despite the low ranking. Former four-star recruit Corey Dauphine transferred to Tulane from Texas Tech at the end of the semester. The Class of 2018 currently includes five players nationally-ranked in the top 1000 recruits, most of whom usually end up at schools in Power 5 conferences. Fritz’s ability to attract these high-level players to Tulane may be the key to Tulane’s success in the future and to changing the history of the school.

And history is a big tie-in here. Tulane’s history in football is, for the most part, poor. In the 115 years since there has been at least one annual bowl game, Tulane has played in 10 and won four. And recruiting, especially in recent years, has become increasingly recognized as crucial to success. This doesn’t mean low-ranked recruits cannot become stars. There will always be players like J. J. Watt (2 stars), Demarcus Ware (unranked) or even Drew Brees (unranked) who defy expectations. Tulane’s own Matt Forte was a two-star player, with the Green Wave being the only D1 school to recruit him. But even with these players in mind, it is clear that stronger recruiting classes tend to lead to stronger teams. Historically, Tulane has had neither.

There have been exceptions for this program. Up until 1966, Tulane was in the Southeastern Conference. In 1998, Tulane went undefeated and finished the season 7th in the rankings. Even in losing seasons, great players have come through the program. There have been brief, inconsistent periods of greatness. But there has been one constant throughout the program’s history. Since Rivals officially began tracking recruiting classes in 2002, Tulane has never ranked within the top 50.