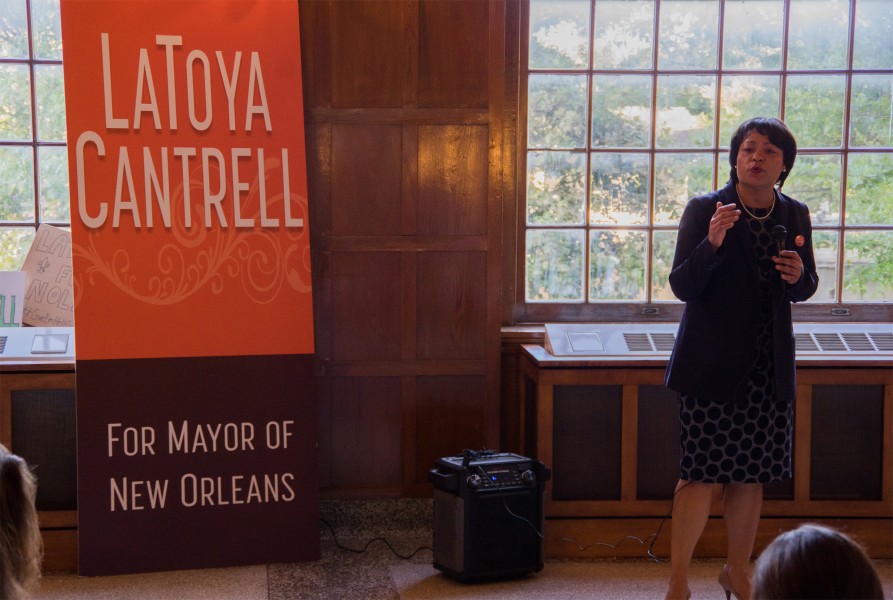 Mayoral candidate LaToya Cantrell hosted a Q&A for Tulane and Loyola students in the Josephine Louise Ballroom on Wednesday to address concerns related to policing, discrimination and LGBTQ+ issues.

Mayoral candidate and current New Orleans City Council member LaToya Cantrell held a Q&A for the Tulane and Loyola communities Wednesday about her political and personal history and hopes for the future of New Orleans.

“Anyone can talk to her, and she’ll seem like a really down-to-earth person and someone who’s really connected with the community,” Tulane sophomore Matthew Weber said. “So, I think she’ll be a perfect fit. I hope she wins.”

Cantrell first came to New Orleans from Los Angeles when she enrolled at Xavier University in 1990. She credits her time at Xavier for opening her eyes to the dual-reality that exists for many of the city’s residents.

“New Orleans is also a city of two truths. The first truth is that of a rapidly growing city … But there’s another truth. This truth is about crime,” Cantrell’s campaign website reads.

Many individuals of traditionally marginalized identities in New Orleans experience this concept of “two truths,” as they navigate living in a city bursting with culture and potential, while also facing discrimination. When asked by a Tulane student for her take on the issue of equality, Cantrell voiced her concerns and gave her views throughout the Q&A.

Students raised concerns regarding undocumented immigrants and shared their fears about being profiled and detained. Cantrell highlighted the importance of immigrants to the New Orleans community and offered words of support.

“Whether they are officially legal or not, they’re in your city, and we have the responsibility to meet our people where they are and meet their needs,” Cantrell said.

Expanding on her stance on immigrants in New Orleans, Cantrell also vowed to work on the concerns students had with Immigration and Customs Enforcement, which enforces immigration, border and other federal laws.

“One of the things that I’ve already done in setting that tone is passing ‘Welcome to the City’ legislation,” Cantrell said. “Understanding first hand … that we’re implementing ICE when we didn’t have to … I would work with the sheriff to end ICE.”

Local governments have little control over federal entities such as ICE due to the nature of the separation of powers between federal and state governments.

After working with the Broadmoor community after Hurricane Katrina, Cantrell joined the New Orleans City Council. There, she worked to fight for criminal justice, analyze the city’s anti-gun violence campaign and highlight the New Orleans Police Department’s understaffing.

New Orleans is no stranger to tensions arising between the community and the police department. Last year, the city of New Orleans settled three police brutality cases dating back to Katrina for a total of $13.3 million.

Cantrell sees room for improvement in the police department and said she believes many internal and external changes need to occur. She said any future police chief of New Orleans needs to motivate his or her staff and connect with the community at large.

“The morale that we have right now [in the police department] is very low” Cantrell said. “I’m looking for someone who has demonstrated a track record of reducing violent crime and is able to fully implement neighborhood policing strategies.”

Cantrell also covered another side of law enforcement when a student asked a question about hate crimes within and outside of the police department, to which Cantrell offered her solutions.

“With real education … [we can train] our officers to know how to interact and respect the lives of people,” Cantrell said. “Setting the tone at the very top …  No tolerance at all for discrimination against anybody.”

Cantrell not only touched on law enforcement for the general community, but also addressed students’ concerns on the relationship between police and transgender-identifying residents.

“Within the LGBT community and transgender community … when they’re pulled over … and the name is Trisha [on the ID], but they go by John immediately when their ID is pulled up … there’s some level of discrimination,” Cantrell said. “That has to change.”

According to the National Transgender Task Force, 29 percent of trans-identifying people reported police harassment or disrespect in a 2011 survey, and 12 percent reported having been denied equal treatment or harassed by judges or court officials.

New Orleans has the fourth largest LGBTQ+ population of all U.S. metropolitan areas, according to the New York Times. Cantrell addressed how LGBTQ+ individuals and groups may feel unrepresented by local government, despite their presence in the city.

“I want people to see themselves at city hall, too,” Cantrell said. “It’s about access and how intentionally we welcome and work with people … how we embrace them.”

Cantrell hopes to appeal not only to New Orleans natives, but also to students throughout the city who, like Cantrell, have relocated to New Orleans for college. Tulane students and others working with the Cantrell campaign will hold a voter registration drive Thursday to register students who grew up outside of New Orleans but who want to get involved in local politics.