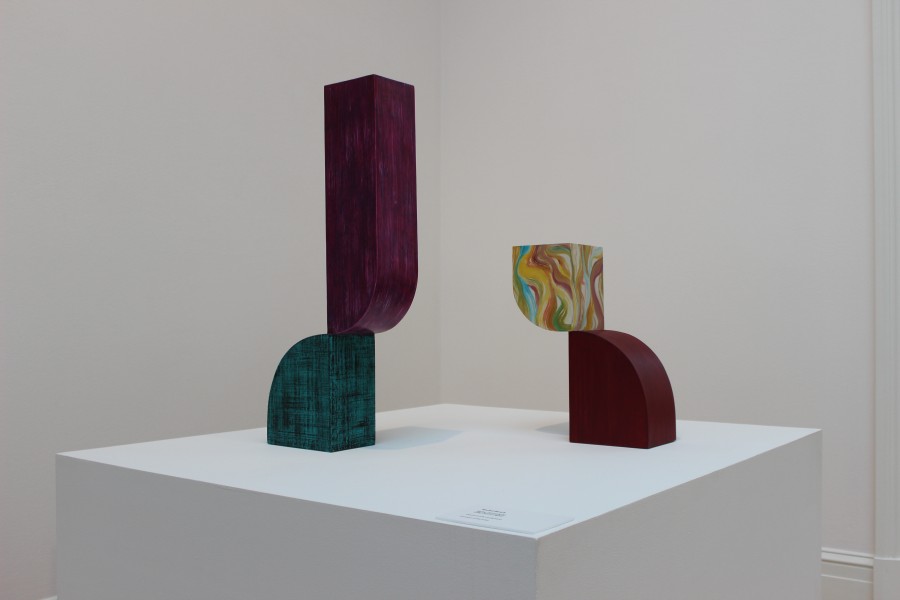 Rachel Beach, one of the artists featured in the “Unfamiliar Again” exhibition, makes sculptures that blend contemporary abstractionist techniques.

Across the country in San Francisco, artist Amy Ellingson twists and bends shapes on Photoshop, layering colors and movement onto the screen before turning her digitally-inspired creations into larger-than-life paintings.

Vieux and Ellingson are two of seven women abstractionist artists featured in “Unfamiliar Again,” an exhibition intended to highlight the relationships between contemporary art and digital technologies.

“I think that [the exhibition] is a perfect bridge to see what the possibilities of new technology are when when you deploy them to create traditional works,” Ramirez-Montagut said. “… It’s not so digitally-oriented that some folks might not recognize it as art, but I do think it exceeds your traditional expectations of what art is.”

Located in the Woldenberg Art Center and on exhibit until Dec. 23, “Unfamiliar Again” is, according to the Newcomb Art Gallery website, intended to “defamiliarize common imagery.” The sentiment is one that Ellingson shares, and tries to capture in her art.

“I think painters are in the habit of being in this defensive mode of thinking how can we keep it alive? How can we, as the show’s title says, make it unfamiliar again?” Ellingson said. “I think this idea of how can we use technology to actually, not only keep it alive, but make it more exciting and more fabulous and more unfamiliar than ever again, that’s what I’m trying to do.”

For Vieux, the intersections between digital technology and art are what make her work both challenging and exciting.

“I’ve been thinking about how my images could slow down virtual space and speed up painting space,” Vieux said. “Abstraction can be a surprisingly accessible language and there is a lot of room to expand it … the question of how an image performs, where it can exist, and what kind of effects it has have been called into question with our current technological culture.”

According to Ramirez-Montagut, the process of utilizing new technologies in art does not make the creation processes any easier or quicker. If anything, she says, it lengthens and convolutes the processes, making the final products surprising, and ‘unfamiliar again.’

“I think that’s what a lot of these artists thrive on where it’s even a surprise for them,” Ramirez-Montagut said. “I think that’s where the interesting part is for them and for us, because they are creating new images that we haven’t seen before.”

This long, often painstaking process of creating art is what the featured artists hope will come through in their work both because of and in spite of the influences of digital technologies.

Ellingson’s website describes her art as “exaggerat[ing] the dichotomy between lightning fast digital rendering processes and traditional oil …” For her, this dichotomy is at the center of her artistic inspiration.

“The lightning fast part of it is so much part of our virtual life and world …” Ellingson said. “And yet, throughout all of human history up until just these last few years, humans made things in a very slow, methodical, handmade way … .”

Ellingson, who spends minutes or hours digitally sketching a painting, might take up to six months to finish the painting. The process for her is slow, but it is purposeful and meaningful in the context of the changing world.

“I can do part of this really fast, and then I choose to do part of it really slow,” Ellingson said. “And it means something to me, because it’s like committing myself to this thing for a really long time.”

Ramirez-Montagut, too, hopes that the featured art in the “Unfamiliar Again” exhibit will help Tulane students interested in art to understand the artistic process from conception to completion.

“If you want to do a painting and you find yourself confronted with a blank canvas, where do you even start?” Ramirez-Montagut said. “And so this exhibition shows seven artists that are talking about how they deal with that blank canvas and where they start.”

Artists not mentioned in this article but featured in the exhibition include Morgan Blair, Brittany Nelson and Barbara Takenaga.