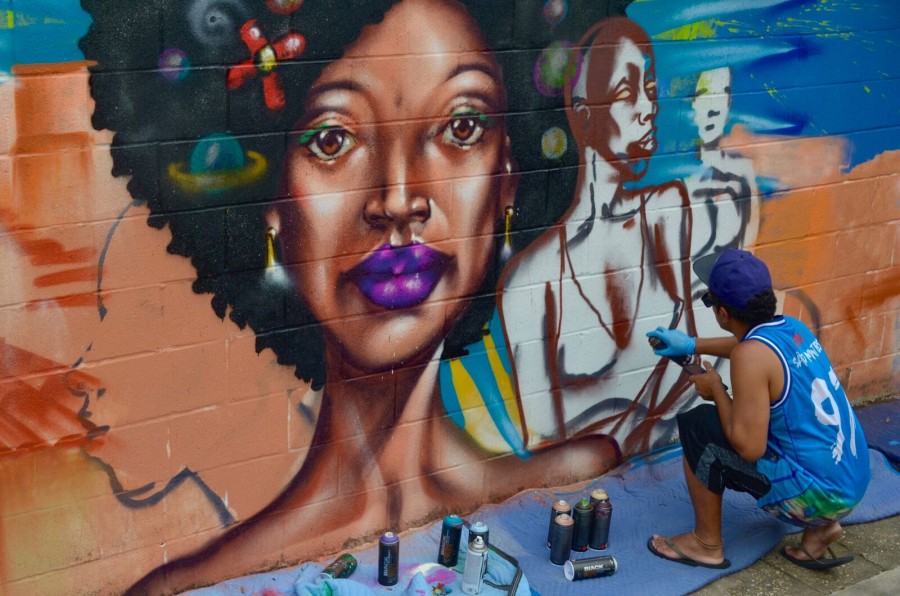 The Hullabaloo’s interview with Toddy was translated from Portuguese to English by Annie Gibson. The quotations attributed to Toddy in this article are Gibson’s translations.

Toddy and Val are the stage names of the artists within Grupo Opni.

On a mural in New Orleans, a woman with outer space in her afro is painted in front of another woman bearing an alien on her arm. These symbols showcase the namesake of Grupo OPNI and the ideas the group brought from Brazil to Tulane’s campus this past week.

“OPNI” is a Portuguese acronym which roughly means “unidentified pixel objects.” For Grupo OPNI, the name represents the feeling of being alienated from mainstream Brazilian society.

“The way that Brazilians looked at people from the periphery was as if we were these alien bodies that were walking through the city that no one understood and was able to represent,” Toddy said. “So through our art we wanted to provide a space to highlight those figures as being culturally important.”

Hailing from São Mateus, Brazil, one of the most marginalized and impoverished favelas, or low-income areas, in São Paulo, the collective of 20 artists paints from personal experiences. Many of its murals focus on its own neighborhood but relay themes applicable in many parts of the world. Some of these ideas are what the group’s host, Annie Gibson, administrative assistant professor at the department of global education, hopes the Tulane and New Orleans communities gain from OPNI’s visit.

Gibson has known OPNI since she translated for the group during its visit to the 2014 New Orleans Jazz and Heritage Festival. Since then she has kept in touch with OPNI and arranged the group’s events on campus after learning that two of the founding members, Toddy and Val, were coming to the U.S.

The activities lasted three days, starting on Sunday with a welcome event and graffiti demonstration at Gibson’s house.  This first event was open to Tulane affiliates, Gibson’s neighborhood and the rest of the New Orleans community. The mural painted on a wall in Gibson’s backyard represented an extension of OPNI’s current project in Brazil called “Favela Galeria,” which OPNI group members see as a way to bring art to a community that is typically void of artistic activity.

“Favela Galeria … [is] using graffiti as a way to highlight social inclusion, anti-discrimination and women’s rights within that neighborhood,” Gibson said. “So basically any wall or even anyone’s house, that if you wanna knock on their door and say can we paint your house, if they say ‘yes’ then they can paint.”

The group’s other demonstrations across campus focused on similar themes.  On Monday, OPNI worked with Professor Rosanne Adderley’s history class to paint a Brazilian slave rebellion from the perspective of those disenfranchised by slavery.

On Tuesday, OPNI gathered in Pocket Park outside the Lavin-Bernick Center for University Life for another artistic demonstration during the weekly global café.  The group also worked with the Taylor Center on a demonstration and included various Portuguese and Brazilian classes throughout all their other events.

OPNI also branched out from the Tulane community and visited Warren Easton High School for a Q&A session, engaging with local youth populations, as it often does in Brazil.

“One thing that I’d like to say is that it’s amazing how no matter where we go they find a way of finding other people that connect to these ideas that we’re passing — that we are all part of the same tribe in different countries and different regions,” Toddy said. “These ideas are universal.”