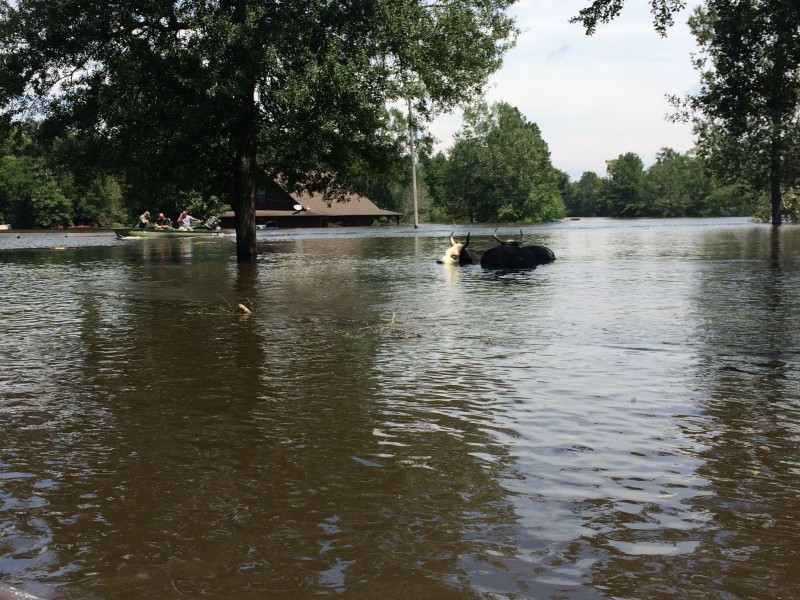 In the wake of Hurricane Harvey, more than 50 inches of rain and severe flooding damaged many homes and buildings.  (Courtesy of Ben Brubaker)

In the wake of Hurricane Harvey, more than 50 inches of rain and severe flooding damaged many homes and buildings.

Hurricane Harvey hit Texas on Aug. 25, bringing unprecedented flooding to the affected regions. The hurricane took the lives of at least 70 people while also dropping as many as 50 inches of rain on parts of the Houston area, amounting to about $200 billion in damages.

Though Tulane’s campuses escaped flooding, the devastation in Texas affected many communities affiliated with Tulane. Nearly 4 percent of Tulane students hail from Texas, and many Tulane alumni live in the affected areas.

Sophomore Ashley Antony was one of the students affected by the flooding.

“I live north of the metro Houston area, and I’ve lived there for my entire life, 19 years, [and] we’ve never had flooding, we’ve never had drainage problems,” Antony said. “We had water levels up to halfway past our door. So my brother could not leave the house, and there was no internet, no power.”

Dr. Lisa Bomgaars, director of Clinical Research Operations for the Texas Children’s Cancer Center, was also affected. Bomgaars’ home in Houston saw four inches of flooding, resulting in about $250,000 worth of damages. Fortunately, these costs were offset by federal flood insurance, which Bomgaars received only a year prior.

“It doesn’t matter if your house is worth a million dollars or $300,000, you get the same amount of insurance,” Bomgaars said. “The most insurance you can get for your house is $250,000 to cover the structure of your house.”

Many Houston residents do not have flood insurance, as the metropolitan area is outside the usual range of flooding. Paying the costs of these damages can put a considerable financial strain on residents and their families.

Antony said she found the Tulane community to be supportive of her and her family in Houston during this time.

“I think I received like 10 emails the first week,” Antony said. “In all my classes the professors came up to me after and asked if my parents were alright. One of my professors even offered to let my parents stay with them, which I was so touched by. … even the LBC workers were like, ‘Oh my gosh, you’re from Houston? How are you?'”

Some Tulane community members took further action to help those affected by the flooding. Ben Brubaker, program manager at the Center for Public Service, assisted in rescuing people from the floodwaters in Texas and Louisiana.

Brubaker was a student at Tulane when Hurricane Katrina hit New Orleans. He said the destruction wrought by Katrina and the inadequate emergency response to the flooding in New Orleans left a lasting impact on him. When he heard about the call for volunteers, he was eager to join the rescue effort.

“I was lying awake in bed the whole night on Monday, fearful for what people were going through,” Brubaker said. “There’s probably a lot of families from New Orleans that had moved to Houston that might be reliving that nightmare all over again. And just, [I was] feeling like it could easily happen to me, and I would want somebody to be there for me, [and] I know people would be.”

On Monday, Aug. 28, the first day of classes at Tulane, Brubaker drove to Lake Charles, Louisiana. He registered with the Cajun Army, a Louisiana-based grassroots volunteer unit that uses tracking technology and volunteers on boats to rescue people from floodwaters. Brubaker spent the next several days helping with rescue efforts as Harvey, a tropical storm at the time, made landfall for the third time and finally began to dissipate.

The volunteers rescued a number of people from their homes before the military took over late Wednesday or early Thursday. Brubaker, however, said that the storm’s impact will likely last long after the floodwaters recede.

“I think that we can take this as an opportunity to pay that forward and to pay it back …,” Brubaker said. “Our identity is so tied to public service because of the experience with Katrina and the levee failure.”

There are many opportunities for students to get involved in more long-term relief efforts. On Wednesday, the Community Action Council for Tulane University Students hosted a hurricane relief meeting, in which students and organizations discussed their ideas and plans for relief efforts.

Students interested in volunteering can sign up for regular updates on hurricane relief efforts through OrgSync or apply to participate in the TAB Fall Break trip.

Moving forward, Brubaker challenged people to remember their shared humanity, in times of disaster and otherwise.

“Our obligation to see each other’s humanity and to be there for one another is not just limited to times of disaster, but sometimes it takes a disaster to wake us up,” Brubaker said. “And I think that’s what I saw in the Harvey response — people saw each other’s humanity.”