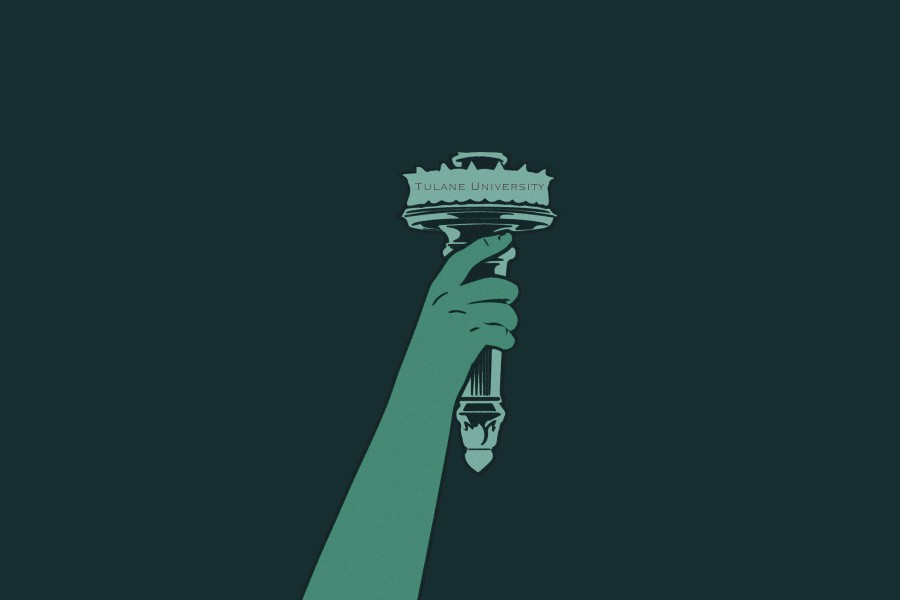 “All of that is destroyed now”: Tulane feels impact of DACA repeal

When President Trump announced the repeal of Deferred Action for Childhood Arrivals, Tulane undergraduate and DACA beneficiary Jane* said she had little time to feel or panic. Survival was the only thing on her mind.

“My immediate reaction was just, ‘what are the steps I need to take right now that will ensure that my future is fine,'” Jane said. “It was a lot more logical thinking than even emotional. I think that’s kinda the thing that we have to think about sometimes in order to move on.”

DACA, a federal government program, applies to undocumented people who came to the U.S. as minors. The program defers deportation for a period of two years but does not offer legal status to recipients.

For students to be eligible for DACA, they must currently be enrolled in or have graduated from high school or a General Educational Development (GED) program. Given these requirements, many DACA beneficiaries are college students.

On Sept. 5, the Trump Administration announced that it will give Congress six months to devise an alternative to the program, at which point DACA will be rescinded. Current beneficiaries of DACA have until Oct. 5 to renew their applications for a final two years.

The number students who benefit from DACA on Tulane’s campus is unknown, as the University does not collect data on the immigration status of students. It is rare for students to self-report their status to their universities due to institutional or interpersonal threats to students’ safety and privacy.

“[DACA beneficiaries] are in universities and colleges already, studying hard, making good grades, thinking about being a success in life,” Rafael Velasquez, a community organizer of Nuestra Voz NOLA, an organization that advocates for Latinx students in the education system, said. “All of that is destroyed now. Now they are in fear.”

Undocumented students on Tulane’s campus face many struggles, often in silence due to the stigma that comes with their status. According to the Institute for Immigration, Globalization and Education at the University of California, Los Angeles, undocumented students experience higher levels of anxiety compared to the national population.

To help educate relevant faculty on these concerns, Undocumented Student Support Committee founder Vanessa Castañeda, along with other committee members, organized a workshop for the Office of Financial Aid about issues undocumented students face.

“Nobody even knew what DACA meant. It was a very clear sign that this is something that people just don’t know about,” Castañeda said. “How can a university that is supposed to guide a young adult into these different spheres … help them when [they] don’t even understand what they’re going through?”

Many administrators and staff members are unaware of the pressures that immigrant students may endure, including the financial burden.

“The very fact that you can’t apply through FAFSA to determine your need means that there’s a lot of other scholarships and financial opportunities that are just off the table for you,” David Rodriguez Perez, a third-year graduate student at Tulane and DACA beneficiary, said. “I think that was the biggest struggle for my family.”

For some less fortunate students it is not a question of how, but if.

“With other undocumented students that I knew, some decided to not go to college for not being able to afford it, their families have not been well versed in navigating financial loans,” Rodriguez Perez said. 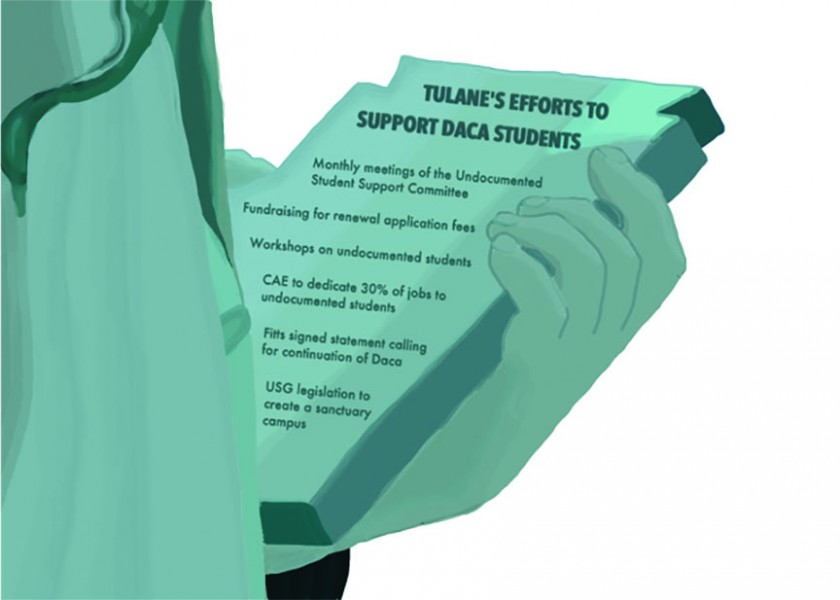 Though undocumented students are not eligible for state or federal financial aid, some may qualify for merit scholarships and need-based aid capped at $20,000.

Since President Trump’s decision, an additional financial burden emerged. Nicole Caridad Ralston, program manager for the Center for Public Service and co-founder of the USSC, said the DACA renewal fee of $495 can end up being $1,000 once legal assistance is factored in. Many DACA beneficiaries must now submit renewal applications in order to stay in the country, which can be difficult not only to pay for, but also to understand.

“If you look at the perspective of some immigrant family whose parents may not be very well versed in English … you have these kids who have to go through that process by themselves,” Rodriguez Perez said.

At this time, Tulane has not presented any plan for offering low-cost legal aid options for undocumented students.

Because it is staffed by law students, Tulane University Legal Assistance Program is only open during the fall and spring semesters. And because of the prolonged nature of DACA cases, the primary assistance TULAP can provide is answering questions.

Another option for students in need of legal assistance is the Loyola University New Orleans College of Law Stuart H. Smith Law Clinic and Center for Social Justice, which offers legal assistance at no charge to community members whose income is less than double the federal poverty level.

“We believe that the students need to be protected,” Hiroko Kusuda, clinic professor and director of the Immigration Law section of the Loyola law clinic, said. “So anybody in this community who wants to get DACA renewed, but they don’t have the money to hire a private attorney, they can come to us and we will help them.”

While Tulane may not offer a wide variety of legal resources, it does provide confidentiality.

“In accordance with the Federal Family Education and Rights of Privacy Act (FERPA), we cannot and will not voluntarily share private information about any of our students unless we are specifically required to do so because of a duly issued warrant or subpoena,” Fitts wrote in A View From Gibson.

According to TULAP civil section attorney Gregory Nichols, a subpoena for student information is likely to be contested by the University and only honored after a judge has ruled to uphold the warrant.

In January, the Undocumented Student Support Committee formed in response to concerns that the new administration was unprepared to meet all needs of undocumented students.  The committee, which includes members of Tulane faculty, staff and students, is focused on projects that include efforts to keep an immigration attorney on staff or retainer, provide a website of resources and host monthly meetings.

“The purpose of those monthly meetings is to keep the conversation going until things are fully better,” Caridad Ralston said. “But I think that is a big part of it. Even though it’s not being retweeted millions of times this week, there are still real people on this campus who are dealing with a lot of stuff in terms of their status in this country.”

The committee plans on hosting more workshops for faculty, students and staff to help create an environment that supports and addresses the need of undocumented members of the Tulane community.

Addressing some of these concerns, Fitts, alongside 600 other college and university presidents, signed a statement in November calling for the continuation of DACA.

While not officially declaring itself to be a sanctuary campus, the University supports certain aspects of what it means to be one.

“There is considerable debate over what is precisely meant by the term ‘sanctuary campus,'” Fitts said. “We feel that a commitment to support our DACA students and working with our congressional leaders to reinstate the DACA program is more important than any designation.”

USG representatives are hoping to pass a resolution instituting a stipend program to help undocumented students finance their educations.

While immigration is a national issue that expands beyond the University, the Tulane community has taken strides to offer support to undocumented students on campus. Many believe there is still room to help throughout these pressing times.

“There are things that are beyond our control as an institution, beyond our control as individuals,” Briana Mohan, senior academic and career advisor in the Office of Graduate and Postdoctoral Studies and co-founder of USSC said. “But if we are doing what we should and what we can as a university community … we should be a community such that there is never a sense of hopelessness … because they know that there are people at Tulane … who are with them, who are supporting them, who will fight with them.”

*Jane is a student who requested to remain anonymous for the reporting of this article.