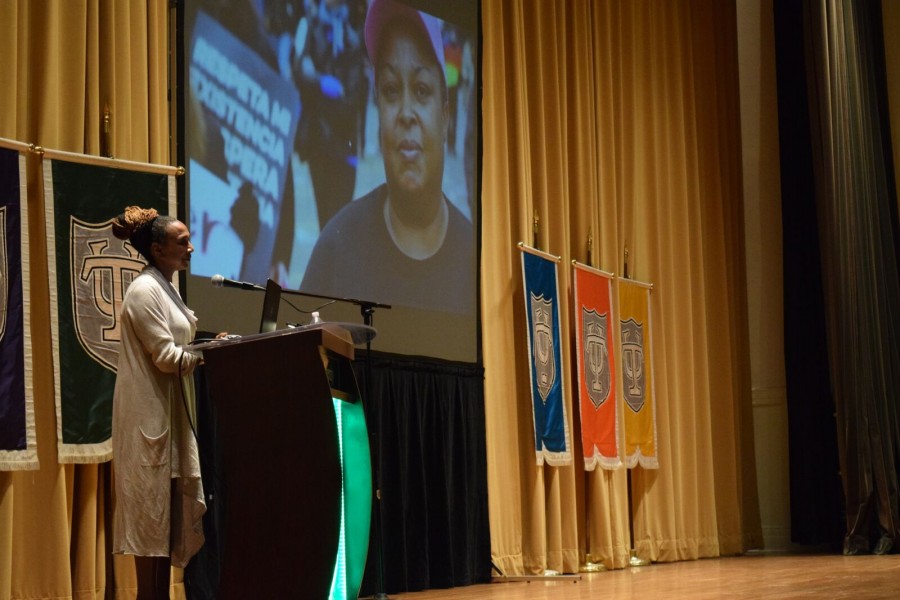 “[Intersectionality] has been gentrified in the sense that people to whom it initially designed to recognize have been pushed out of the discourse,” Kimberlé Crenshaw said at a lunch for Tulane student leaders, staff and faculty members on Sept. 25. “[Women of color] can’t be completely pushed in the margins by an idea that was meant to de-marginalize the margins.”

Crenshaw, a law professor at UCLA and Columbia University, is a pioneer in the field of critical race theory and is best known for coining the term “intersectionality.” An advocate for more inclusive social justice work and racial analysis, Crenshaw visited Tulane on Sept. 25, when she spoke to Tulane community members at a luncheon and at a lecture in McAlister Auditorium.

“Intersectionality,” as defined by Crenshaw, refers to the compounding oppression faced by black women due to the combination of racism and misogyny. The term has gained popularity and has been expanded to encompass other forms of intersecting oppressions like homophobia and anti-blackness.

“Mapping the Margins: Intersectionality, Identity Politics and Violence Against,” Crenshaw’s article that popularized the notion of intersectionality, has become one of the most notable texts in modern conversations around race and gender. In recent years, however, there has been concern that the conversation surrounding intersectionality is shifting away from its intended purpose of centering on the voices of black women by instead pushing them toward the margins.

According to The Journal of Negro Education, women of color in academia often feel undervalued, especially if their work focuses on oppression they experience firsthand.

“Because their research is frequently viewed as insignificant, these women often receive little or no support for their intellectual pursuits, especially when their work centers on racial, ethnic, and/or gender issues,” the article reads.

As a scholar, Crenshaw said she sees firsthand the hardships that come with being a black woman in the world of academia.

“To the extent that objectivity is described in color blind, gender blind, class blind terms in society at large, [it’s] definitely going to be defined that way in an institution like this which makes its presence valuable in society by reinforcing aspects of the society that we live in,” Crenshaw said at the luncheon.

According to Crenshaw, the challenges black women face in the world of academia are neither unique nor limited to their professional work, but instead are problems they face in many segments of public and private life.

“I think about the academy as an institutional site of struggle in the same way the streets are a site of struggle, ballot boxes are the site of struggle,” Crenshaw said at the luncheon. “Here we’re struggling about the nature of knowledge, how it gets produced, what it mobilizes, what it interrupts … Our role in this space is to contest how racial injustice, gender injustice, how all these things have been normalized by claims of objectivity or claims of special analytical knowledge.”

According to Crenshaw, the erasure of black women can be seen in social justice work, which often fails to include those with struggles that lie on the margins.

“It is the collective forgetting of [the work of black women] that allows contemporary folks to say that the fight against patriarchy is foreign to our community,” Crenshaw said during the lecture. “That gender equity has to wait until racial justice for our men is achieved. It is the height of self-destruction for a community not to be in solidarity with itself.”

Some believe this exclusion can also be seen when white women activists exclude women of color from the framework of their fight for gender equality, a phenomenon known as White Feminism.

As this term has gained credence, many have applied Crenshaw’s method of analysis and coined the term “intersectional feminism” as its counterpart. Though Crenshaw said she believes an intersectional analysis of feminism marks an important move toward addressing marginalization of women of color, she thinks it is just the first step in resolving a greater issue.

“So intersectionality is a way forward only if we’re willing to face some hard truths,” Crenshaw said during the lecture. “To recover aspects of our history that have been forgotten and to sometimes risk being told that we aren’t good enough allies when we insist on justice for all of us.”