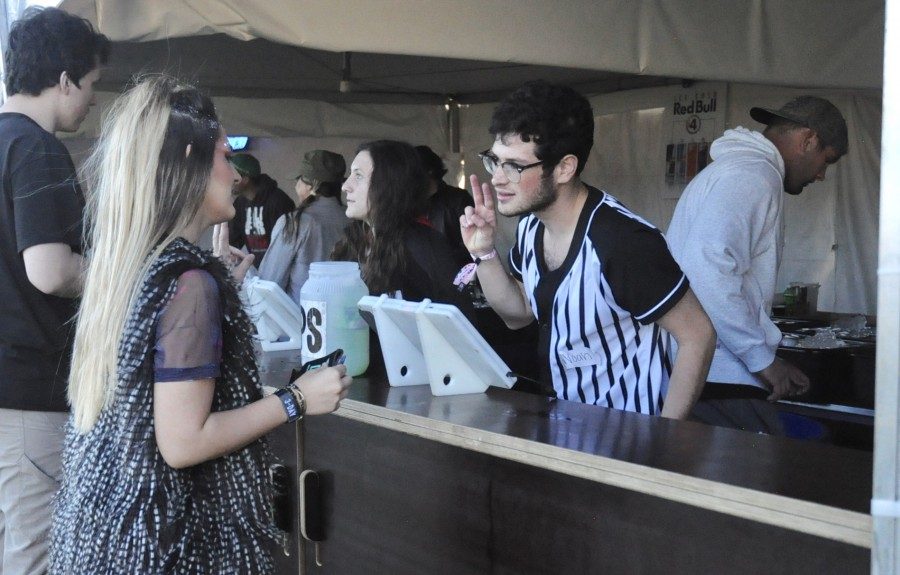 Sophomore Noah Shapiro takes orders at the bar, working at the Voodoo Music + Arts Experience. He went to the festival for free by serving drinks.

Blinding sun shone through a gap in the tent, and sophomore Noah Shapiro blinked. As he furrowed his brow, cold sweat trickled between his eyes and down his back. The day was perfect, in a characteristically Louisiana fashion. The sky was cloudless, the humidity oppressive, the scent of freshly-trodden grass palpable.

A mercifully cool breeze swept through the Voodoo Music + Arts Experience and the grounds of City Park, as a voice shattered his reverie: “Hey, Noah, two waters!” He thrust his hand into a frigid cooler full to the brim with ice-cold water bottles. Standing again and holding two bottles, each hand-numbing and dripping with condensate, he paused.

In the distance he could see, hear and feel Le Plur’s performer, the bass vibrating, pulsating in his chest even from where he stood. He breathed a sigh of satisfaction, feeling disconnected from the other Tulane students moshing in the distant crowd. The view wasn’t perfect, but the free admission sure felt good.

With Voodoo’s high-profile acts and immersive installations, it came as no surprise that costs for passes were relatively high and only increasing as the weekend drew closer. Ticket prices were difficult for many Tulane students to justify, though several devised effective plans to fund their Voodoo experiences.

From behind the scenes, many students found an alternative way to enjoy Voodoo, working as vendors or bartenders. They not only obtained free tickets, but also earned passable wages and tips for the weekend.

“This is a job, and that’s the reality of it, but it is a fun job,” Shapiro said. “So even if I’m not seeing all of the acts that I would normally want to, I’m still right in that atmosphere and part of that really cool experience.”

Sophomore Eve Maglia, a two-time Voodoo bartender, attested to the demand of the job as well. “It’s a blur. I entered a different dimension on Friday morning and didn’t leave that dimension until after Halloween … [it’s] crazy, but again, the money is definitely worth it.”

Not all students, however, found the opportunity as worthwhile. For some, working at Voodoo is comparable to any other service job, but packed into a single weekend.

“We were required to be on our feet for up to 15 hours with only one 30-minute lunch break,” sophomore Joel Hochman, who cashiered for the festival, said. “Working for Voodoo is not nearly the same as going for free. It is extremely taxing and requisite of all of the sanity I possessed.”

Some students also joined the Krewe of Voodoo as Voodoo ambassadors by simply signing up online. Ambassadors stood to receive rewards, including multiple free general admission and even VIP passes, in exchange for selling a certain numbers of tickets. Graduate student Josh Sethi successfully sold five tickets to receive his own free three-day pass, though this was not necessarily an easy task.

“I knew of many friends that wanted to go and would buy a ticket regardless, but convincing took some effort,” Sethi said. “It helped that some people bought multiple at once.”

By the end of the week before the dates of the festival, Oct. 27-29, online listings for general admission three-day wristbands ranged from $120 to almost $200, a steep increase from its early bird price of $99. Even officially on Voodoo’s website, buyers had to shell out about the same amount for last-minute passes.

While these prices are low compared to festivals like Lollapalooza or Outside Lands Music and Arts Festival, which both have passes that cost more than $400, even $99 for a single weekend is often not feasible for struggling students.

But the cost of a wristband is clearly not the only expense necessary at Voodoo. After accounting for food, alcohol, travel and even costumes, total expenditures could potentially be doubled. The weekend also falls during a possibly difficult time in the semester for schoolwork, which makes it difficult for students to buy tickets early without knowing how to plan far in advance.

“I was planning, ‘I want to go all three days, but I’m gonna see how much work I have to do and whether I really want to,'” sophomore Daniel Goldstein said. “And prices kept going up. I bought it on the last day before prices went up even more.”

A majority of students The Hullabaloo surveyed — 56.4 percent of the 149 respondents of a survey administered online — paid for their passes by saving up their own money. Many, for instance, had money saved from jobs worked over the previous summer, and some even intentionally saved up in preparation for the fest.

Thirty-four of the 149 respondents received their tickets from their parents, while 18 reported that they had received their passes as gifts. Sophomore Sitara Masilamani, for example, often receives free concert and festival tickets through a connection with a family friend.

“One of my mom’s friends works in the music industry, so she put two tickets for me under will call,” Masilamani said. “I feel really blessed to be able to have these unique and fun experiences.”

While some students may not be as willing to work so they can buy tickets, many agreed that Voodoo was a meaningful and rewarding experience regardless of how they received their wristbands.

“It’s almost like a soundtrack … the high-paced music goes right along with constantly making drinks,” Shapiro said. “It’s an interesting atmosphere that everything creates.”

Without a doubt in his mind, Shapiro thought Voodoo 2017 was a success. Not only had he entered the fest for free and had the opportunity to see a variety of his favorite electronic artists from afar, on top of it all he walked away from the weekend with several hundred dollars to his name.

During his bartending shift, Yellow Claw’s light show illuminated the dimming sky with colorful hues of red, blue, green and yellow. The roar of the audience could be heard even at the bar tent over the general din of the festival. Shapiro sat back on his heels for a moment before willing himself back into action, handing over the two water bottles a customer had requested, soaking in the festival ambiance he’d come to love.