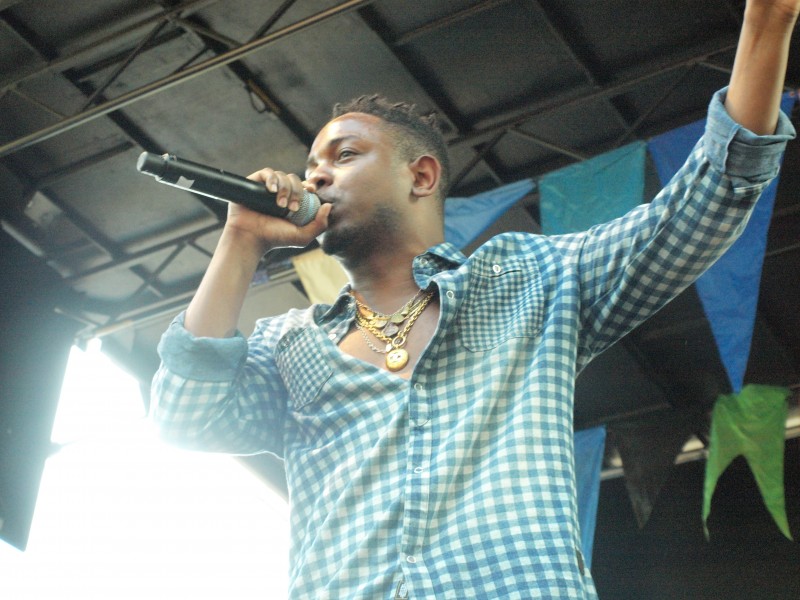 Kendrick Lamar performs in 2012. On Oct. 27, Lamar brought an energetic set to Voodoo.

Kung Fu Kenny first appeared in Lamar’s “DNA.” music video as an homage to Don Cheadle’s character in Rush Hour. With its focus on this martial arts theme, his set opened with this particular track, which is an energetic and outspoken song that celebrates, yet complicates his perceptions of his blackness.

But Lamar’s character, illustrated through a series of clips, popped up again and again over the entire hour-long set. Lamar embodied this warrior spirit during his Friday night performance, just as soul-baring and elaborate as his latest release “DAMN.”

Kendrick Lamar, the Killers & more bring down the house at Voodoo Fest 2017 https://t.co/PN9gQagT2A

Clearly cultivated thoughtfully, the chronology of his tracks flowed smoothly, with new songs almost mixing into hits from 2012’s “good kid” and “m.A.A.d city” and 2015’s “To Pimp a Butterfly,” like old favorites “Bitch, Don’t Kill My Vibe” and “King Kunta.”

The crowd naturally anticipated a high-energy show, and they could not have been disappointed by Lamar’s raw passion and pure skill. Thousands of fans from across the crowd, whether they were close to the stage or farther in the back, rapped along to almost every song, indicative of Lamar’s influence over hip hop and mainstream music. The fans didn’t quit as they continuously jumped in the air and pumped their fists as Lamar rapped.

The last few tracks especially left an impact on Lamar’s audience. During his performances of “Alright” and “HUMBLE.,” Lamar proved that simplicity is effective when accompanied by astute lyricism and nearly untouchable production value.

In fact, the stage was essentially empty, with nothing but Lamar’s energy — and occasionally Kung Fu Kenny’s presence — to fill it. The emptiness focused the attention first on his physical form, then transitioned to the stark visuals on the screen behind him. Such simplicity placed emphasis on the meaning behind his lyrics and on the story hidden under this alter ego, centered on race, self-reflection and the cycle of winning and losing.

His performance felt so effortless that it was almost easy to forget the thought processes nestled underneath. Most listeners left considering they saw a great show and had a fun night. Maybe Lamar’s works are best reserved for moments that give room for reflection; at the same time, maybe they cannot be fully appreciated until performed live.

With his shifu’s help, Kung Fu Kenny transcended the enemies he faced throughout earlier clips, earning his “glow.” After such an emotionally impactful performance, the crowd must have earned something too, even if it is not complete enlightenment. Hopefully, they felt a little humility instead, as Lamar himself suggests.