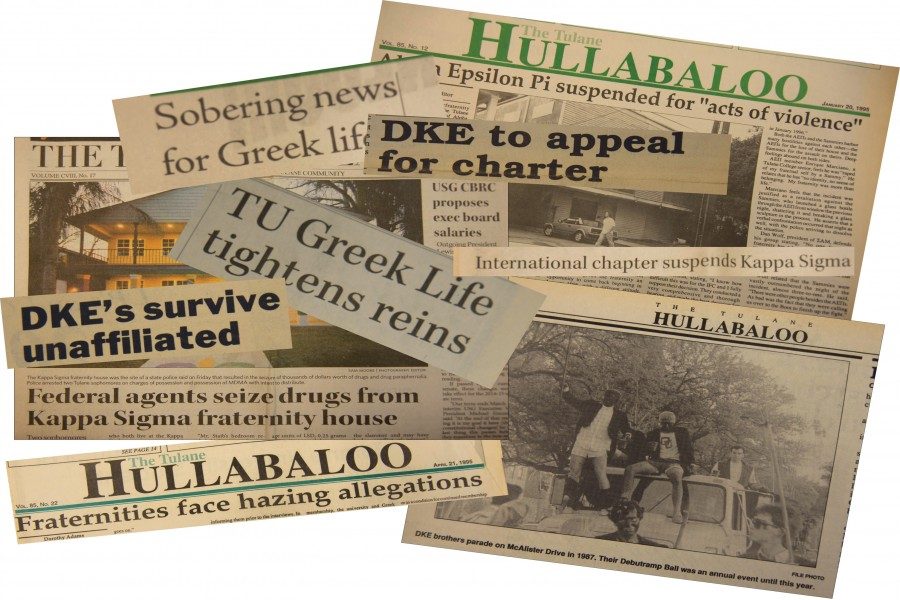 *The Hullabaloo has granted anonymity to some sources in this article to prevent any potential harm. These subjects have been given pseudonyms to protect their identities.

Junior Maggie Kobelski does not typically attend fraternity parties, but the night of Saturday, Nov. 18 was different. Her friends invited her out, and she just wanted to have a good time.

When she entered the home where the party was being hosted, formerly associated with Tulane’s recently closed Kappa Sigma Fraternity chapter, Kobelski was hit with a wave of shock and dismay.

Many party-goers, a majority of them white, donned feathers and face paint meant to imitate Native American tradition. Some painted their entire faces red and were dressed head-to-toe in light brown, suede fringe.

As an on-campus activist and member of Students Organizing Against Racism, Kobelski recognized the theme as something beyond paint and costumes.

“Dranksgiving,” an annual party held by Kappa Sigma at Tulane to celebrate Thanksgiving, encouraged guests to dress as Native Americans or Pilgrims. Some students, such as Kobelski, have taken issue with the tradition in the past, calling it an act of cultural appropriation and racism.

This year’s “Dranksgiving,” however, was different. The fraternity was kicked off campus this semester and therefore is no longer obligated to follow Tulane or Interfraternity Council regulations. Kappa Sigma’s expulsion came after a series of conduct infractions. In August, Kappa Sigma nationals paid for an advertisement in The Hullabaloo “to provide notice that any groups of students representing themselves as the Kappa Sigma Fraternity have no authority to operate a fraternity or fraternity chapter under the name ‘Kappa Sigma’ at Tulane University, or elsewhere in the New Orleans community.”

Once expelled, these groups are no longer recognized by the university and are not allowed to participate in university activities or utilize services or facilities.

Throughout Tulane’s history of Greek life, certain fraternities have been banned from campus for incidents involving racism, hazing, violence, illegal activity and sexual assault. Once these organizations are kicked off campus, however, the responsibility of monitoring no longer falls on the university.

Without the supervision of the university, parties like “Dranksgiving” remain unseen and unregulated by university officials.

“We have no control over the themes of parties hosted by students who are former members of an organization that is no longer recognized by the university,” Liz Schafer, director of Fraternity and Sorority Programs, said.

For some members of these expelled organizations, like former Sammy member Dylan*, expulsion can signify the end of university surveillance for the fraternity and bring more freedom for members to act as they please.

“Tulane didn’t really do anything about us,” Dylan said. “If they knew we were operating they didn’t do anything to stop us.”

Senior member of Kappa Sigma Kyle* described the minimal contact Tulane had with the organization this semester.

“I know Liz Schafer, the head of the IFC, tried to have a meeting with us, and nobody showed up,” Kyle said. “I don’t know why would anyone show up, it doesn’t really make sense, we’re not a fraternity anymore. There’s no incentive for us to show up, and there’s certainly costs.”

While organizations not affiliated with the university are not subject to Tulane regulation, when students continue to participate in fraternities removed from campus they can individually face penalties from the university through student conduct.

“Individuals who are responsible for operating a non-recognized organization or carrying out the traditions or activities of a suspended or terminated fraternity are violations of the Code of Student Conduct and are subject to disciplinary action by the university,” Director of Risk Management Diane Surla said.

Kappa Sigma was placed on probation in spring of 2016, which barred the fraternity from hosting events with alcohol. After other alcohol-related infractions were incurred during the probationary period, the Supreme Executive Committee of Kappa Sigma Fraternity decided on July 14, 2017, to close the chapter for three years.

The group is not able to induct any new members, hold rush or do any activity under the name ‘Kappa Sigma,’ but they still hold informal chapter meetings and parties.

Party invitations for the annual “Dranksgiving” were sent out with the hashtag “#ThankfulforSigma,” and attendees were told to dress as “Native Americans” and “Immigrants.”

Kyle does not consider the party theme to be offensive. He said he believes students are being hyper-sensitive and that the theme was meant to be fun and lighthearted.

“It’s a theme like any other party … This is just a clever name with a good theme because it’s Thanksgiving …” Kyle said. “What are you going to dress up as, a pilgrim or a turkey? No, it’s just not really that fun.”

“Both feathers and face paint have purpose and often spiritual significance depending on tribal protocol and individual interpretation …,” Zotigh said in an MTV article from 2014. “Individuals [outside of the community] who wear feathers or face paint were not given the rights or permissions to wear them.”

Senior and SOAR historian Amber Thorpe said they believe this cultural insensitivity is magnified in the face of an extremely violent past involving the colonization of the United States. Thorpe, who is a descendent of the Seneca Nation, said they felt personally wounded by the theme.

“… [Colonization] resulted in so much trauma, destruction, genocide, murder, assimilation attempts,” Thorpe said. “That’s already bad enough, and then for people like Kappa Sigma to openly wear red face and think of it as a joke is just unbelievably hurtful … it just further adds to the effects of genocide and colonization …”

A History of Banned Fraternities

Kappa Sigma is not the first expelled fraternity to be seen as facilitating racial insensitivity and other instances of misconduct. One of the most publicized examples of this was DKE, whose charter was revoked in 1984 after hazing allegations and reports of pledges having cords tied to their genitals and being ordered to have sex with a goat.

Three years after getting its charter revoked, DKE paraded down McAlister Drive in blackface while carrying lit flambeaux. This was an annual tradition called the Debutramp Ball, meant to mock and offend black people, according to pictures found in the 1987 Jambalaya yearbook. According to witnesses, a particular DKE member also approached a black student with a lit flambeau, allegedly in a manner that suggested he would set fire to the student. 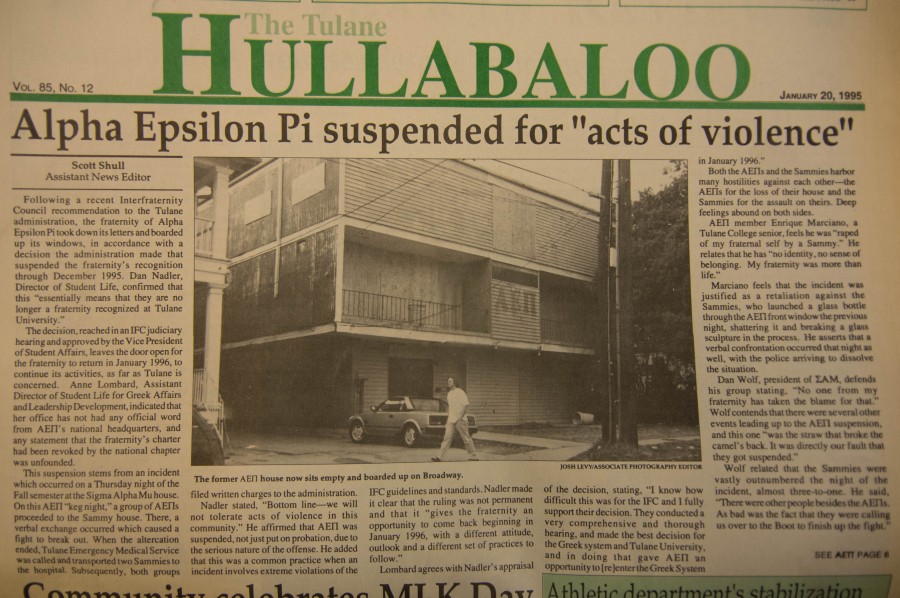 Following these incidents, the administration made a statement about how racism would not be tolerated but ultimately did not take any action to punish the fraternity. The administration explained that it could not identify the fraternity brothers because of their black greasepaint, though the Jambalaya was able to identify each member in published photographs.

In 2013, Kappa Sigma was suspended because two of its members were the subject of a $10,000 drug raid at the fraternity’s house. And in 2016, AEPi’s junior and senior members were placed in bad standing for hazing. According to IFC, “there are members no longer affiliated with Alpha Epsilon Pi still operating as a separate underground organization … ‘” The frat recolonized last year, with new members and members of the most recent class, and is now nationally recognized.

According to Kobelski, this lack of university accountability for supervising banned fraternities opens the door for worse activities.

“If you’re banned by an institution, the institution itself and even the organization that you’re part of should be in control of making sure that you’re unable to have parties like this and continue doing what you were doing before,” Kobelski said.

Sophie Fraser, Undergraduate Student Government Multicultural Council chair, said she thinks the university’s failure to follow through with expelled fraternities sends a clear message to the student body and members of banned organizations about accountability.

“I feel like by Tulane just disassociating themselves with fraternities it makes it easier for them because if something bad happens and they end up in the news, then it won’t be Tulane’s name associated with it,” Fraser said. “It will just be, ‘oh, well we kicked them off, so it doesn’t matter what they did to us.'”

After multiple attempts to contact the Office of Student Conduct, The Hullabaloo was directed to Erica Woodley, assistant vice president for student resources and support services, but was not able to contact her until late in the day of the deadline. The Hullabaloo will update the online version of this article as we learn more.

Fiona Grathwohl contributed to the reporting of this article.

The print version of this article and a previous online version incorrectly stated that Tulane’s AEPi chapter was expelled in 2016. The chapter was placed in bad standing, but is now nationally recognized.  The Hullabaloo regrets this error.

A previous version of this article also included the address of a party mentioned in the article. The Hullabaloo has since removed this address from the article, and regrets the initial inclusion.


There was an issue submitting your request.
34
0