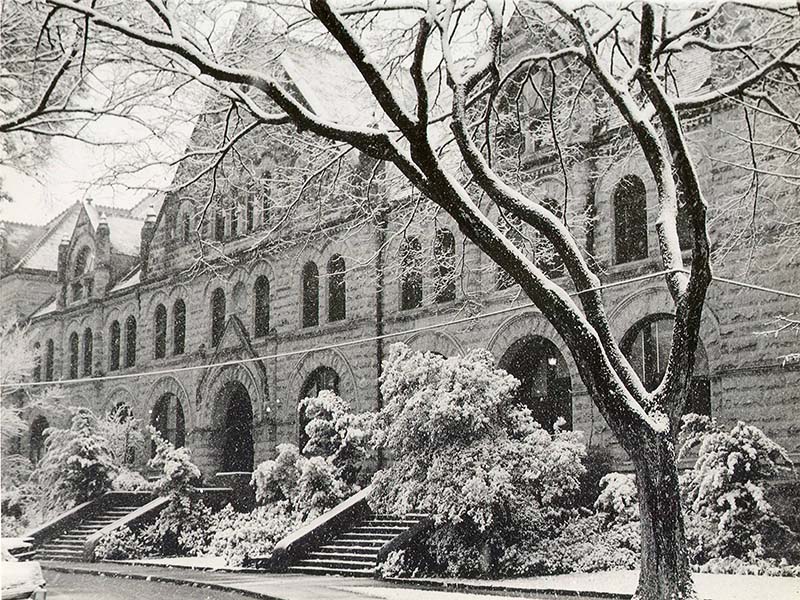 Gibson Hall covered in snow in an archived 1963 photograph.

Tulane’s campuses in New Orleans, Jefferson Parish, the Northshore and Mississippi will be closed for a second day after an unexpected snowfall Tuesday night. The university is functioning under emergency operations this evening, as it was last night.

Students received an email from the Provost yesterday afternoon around 5 p.m. announcing the class cancellations and campus shutdown. Around 3 p.m. today, another announcement went out cancelling evening classes and a third announcement around 6 p.m. cancelled classes again for Thursday.

The campus closure is due to sub-freezing conditions and Tuesday’s hard freeze.

During the campus closure, student services including Bruff Commons, the Lavin-Bernick Center for University Life, the Reily Student Recreation Center and the library remain open with some affected hours of operation.

In addition, Tulane Emergency Medical Services will not be in service and guest visitation in dorms is prohibited.

BRRRR: A shelf cloud moved through the sky, bringing with it freezing temperatures and the possibility of snow to New Orleans. pic.twitter.com/NWZ7tqNAup

The city of New Orleans was under winter weather advisory yesterday and under wind chill advisory today. Schools were closed all across Louisiana, including all schools in Orleans parish.

“I want to thank all of our citizens who heeded our warnings and urge everyone to continue to exercise caution until the conditions of our streets, highways and bridges are safe,” Mayor Mitch Landrieu said in a city government press release. “Given the low temperatures, we must remain vigilant and take the necessary steps to keep our families and property safe.”

Students are encouraged to travel with caution and stay tuned for any updates from the university.

Donate to The Tulane Hullabaloo
$1275
$1000
Contributed
Our Goal
Submitting donation...


There was an issue submitting your request.
1
0