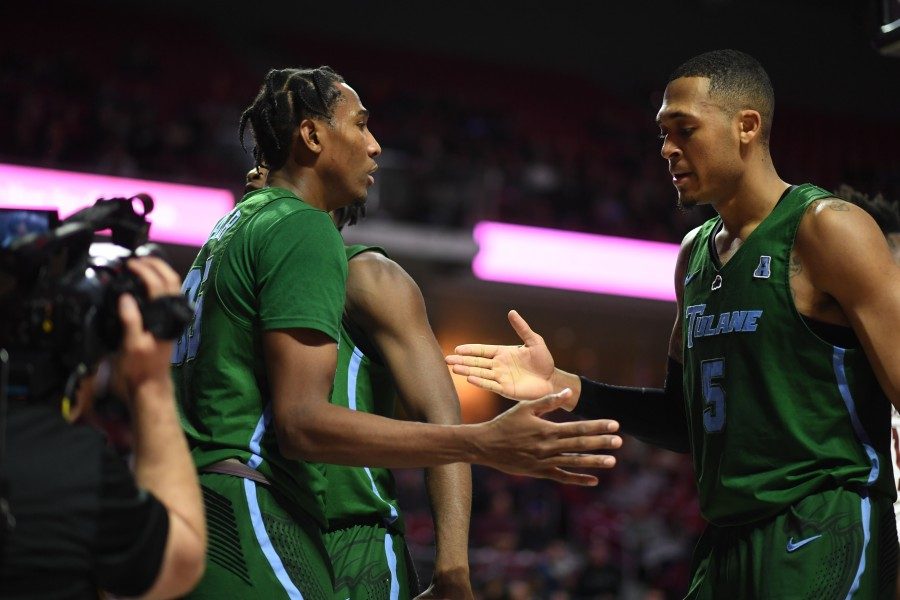 Tulane’s Melvin Frazier and Cameron Reynolds give a high five mid-game. Frazier will be hoping for a good selection in this coming year’s draft.

Men’s and women’s basketball heat up the court, despite freezing temperatures

While Tulane students went back home to lie in their beds and spend time with family over the break, the men’s and women’s basketball teams continued their 2017-18 seasons.

The men’s team played seven games, tallying a 4-3 record over the break, with significant conference wins over Southern Methodist University and the University of Houston.

Tulane’s first matchup against SMU on Jan. 4 proved to be difficult for the Green Wave, trailing by seven points at the end of the first half. With the assistance of senior Cameron Reynolds and junior Melvin Frazier, however, the team was able to come back and defeat the former American Athletic Conference champions by a final score of  73-70. Reynolds racked up 20 points and six rebounds, while Frazier had 15 points, five assists, four rebounds and three steals.

The Green Wave then faced off against the Houston Cougars on Jan. 17. The team had a total of four players reach double-figures: Reynolds, Jordan Cornish, Samir Sehic and Ray Ono Embo. Tulane took an early lead of 16-8, which would turn out to be the Green Wave’s largest margin of the game. Though Houston fought its way back within one point before halftime, the Green Wave would not allow the Cougars to dominate in the second half. The game ended with a final score of 81-72 and another victory for the Green Wave.

The men’s team, however, was not the only one with winter success. Over the break, the Tulane women’s basketball team hosted the 22nd annual Tulane Classic, coming out on top for the 10th year in a row. The first game of the tournament was a match-up between the Green Wave and the Troy Trojans. Senior Kolby Morgan led the team to an easy 106-75 victory. This was the first time since 2008 that Tulane has scored in the triple digits and only the 10th time in program history.

Next up for the Tulane women was the tournament championship against the University of Texas at El Paso on Dec. 22. While this game was not as much of a blowout, Tulane was still able to gain and maintain its lead for the majority of the game. The team finally closed the game with a 67-56 victory for the Green Wave. Morgan, along with junior Meredith Schulte and freshman Sierra Cheatham, recorded double figures in the game. In addition, Morgan, Schulte and sophomore Kayla Manuirirangi were named to the all-tournament team.

The men’s basketball team will travel to East Carolina University on Jan. 31, while the women’s team will face off against No. 1 UConn on Jan. 27.