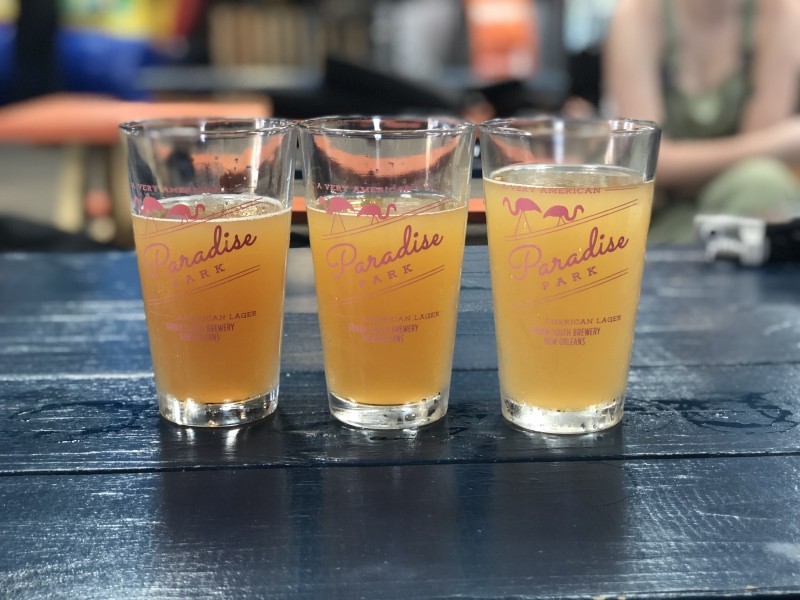 In a city like New Orleans, there is a seemingly endless number of bars and restaurants where you can go to get drinks and enjoy a lazy afternoon or night out. But oftentimes, going to the source of the alcohol can be just as nice as hitting your favorite bar. Luckily for the beer lovers at Tulane, there are plenty of great breweries close to campus to satisfy that beer tooth – if you’re 21, that is. As dedicated journalists, we at The Hullabaloo took it upon ourselves to spend an afternoon drinking beer at three breweries on Tchoupitoulas Street to bring you the inside scoop.

Urban South is a spacious location at the end of Tchoup. There is plenty of room to bring everyone, including your whole family. In fact, Urban South is so family-friendly, it even hosts children’s birthday parties – there were two going on when we visited. Though it does not have a kitchen of its own, Urban South brings in different food trucks and other catering services throughout the week to alleviate your drunchies. It also offers weekly events like crawfish Thursdays and bounce house Sundays. Grab a picnic table and chill, or challenge a friend to a game of foosball.

The Hullabaloo tried three of Urban South’s craft brews: The Grapefruit Holy Roller IPA, a tart farmhouse ale called Coop’d Up and a spring seasonal Delta Momma lager. The brewery-exclusive definitely erred on the tart side, but the other two offered unique tastes. The Grapefruit IPA was a twist on its well-known Holy Roller IPA. Though IPAs can be slightly on the bitter side, the extra grapefruit flavor made the beer more balanced and slightly sweeter than your typical IPA. For those more inclined to lagers, the Delta Momma is a good choice.

NOLA Brewing Company has been in the game the longest of all the Tchoup breweries. The tap room features 24 beers on tap and can’t-miss food from McClure’s Barbecue. Though smaller than the Urban South warehouse, two stories plus outdoor balcony space still make it appropriate for a nice, relaxing day out.

Here, The Hullabaloo tried a flight of four beers: the Hopitoulas IPA, Boil Advisory, Deja Vu Dubbel and, of course, the Green Wave Beer (Roll Wave!). The Hopitoulas was fairly standard, so if you’re an IPA fan, it’ll do the job. The Dubbel is a great example of a good lager that goes down smooth, but strays from traditional lagers in its slight kick. The Boil Advisory was similar, though what really sets this brew apart is its brewing process, which uses crawfish oil. Though it doesn’t actually taste like crawfish, the oil adds a certain spice that compliments the hoppy flavor. The Green Wave Beer was refreshing. If you’re someone who enjoys a lighter beer, the Green Wave is most likely the best option in this flight.

Port Orleans Brewing Company is the newest of the breweries we visited and the closest to Tulane’s campus. Located near Tchoupitoulas and Napoleon Avenue, the location features a tasting room with a view into the brewery, a front porch with seating and an outside patio with picnic tables, Cornhole and giant Jenga. We visited on a beautiful Saturday afternoon, so the outdoor space was the perfect place to relax in the sun, drink a beer and play some Cornhole. With free tours given at 2 p.m., visitors can get a glimpse into how this local beer is made. Port Orleans was The Hullabaloo’s favorite – not just because it featured us on its Instagram, but because it offered the most fun and inviting space of the three breweries.

The flight here featured Port Orleans’ Storyville IPA, the RoyalTea Pale Ale, the Ella Pilsner and its 1718 Tricentennial Wit. The Storyville IPA was reminiscent of the Grapefruit IPA from Urban South: sweet and somewhat tart, but also very balanced. The Ella tasted good but didn’t stand out as a particularly unique pilsner. The RoyalTea was unique because the hops were brewed with tea leaves, giving it a fruitier flavor. Our favorite was the Tricentennial Wit, aptly named for New Orleans’ tricentennial. The Tricentennial was an interesting take on a traditional Belgian wit, with a balanced taste and hints of citrus. In true New Orleans form, it had a slight kick to it before going down smoothly, making it the perfect beverage to celebrate 300 years of New Orleans.

Whether you decide to do a brewery crawl and hit all the spots in one day, or just pick one at which to enjoy a leisurely afternoon, a Saturday spent with beers and friends will never disappoint. As the weather warms up, think about taking a trip down Tchoup and trying something new.

Donate to The Tulane Hullabaloo
$1510
$2000
Contributed
Our Goal
Submitting donation...