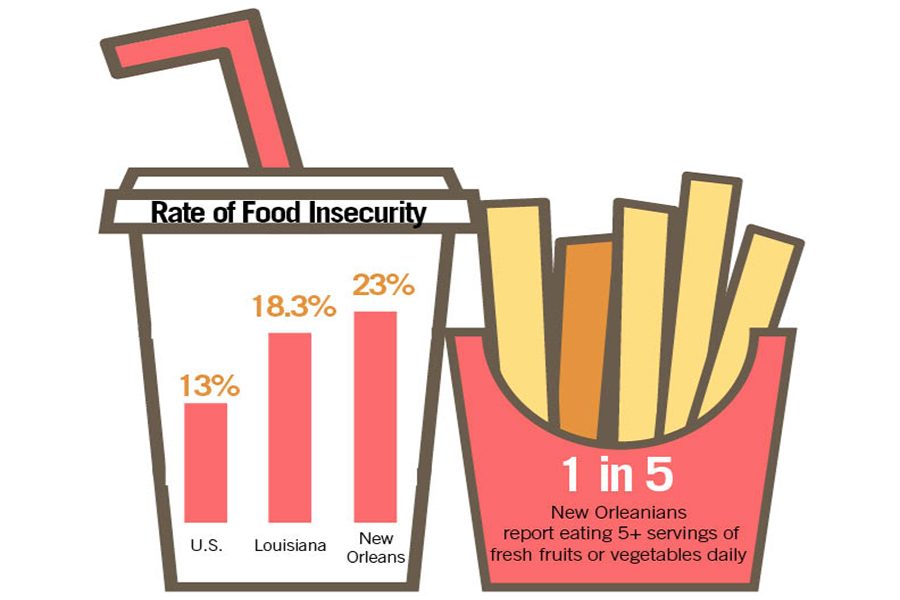 Many students were drawn to Tulane due to its location in New Orleans, with all the music, gorgeous weather and oftentimes famous food that come along with it. Day to day, however, Tulane students may find their food options limited. Outside of Bruff and the food court at the Lavin-Bernick Center for University Life, accessing high-quality food requires at least a 20 minute walk and a large splurge.

Data from the U.S. Department of Agriculture’s household food security scale shows that Louisiana has the second highest food insecurity rate in the country at 18.3 percent, sitting above the U.S. average which lies at 13 percent.

According to Tulane Professor Diego Rose, director of the Nutrition and Food Security Program at the School of Public Health and Tropical Medicine, the same USDA metric shows that both Tulane and neighborhoods within half a mile of its campus are in a food desert.

The USDA defines food deserts as areas lacking availability of fresh fruit, vegetables and other healthful foods. In New Orleans this problem is intensified by the lack of fresh markets and grocery stores and the abundance of convenience stores.

Even in the areas surrounding Tulane, convenience stores are often the closest and least expensive option for Tulane students.

“One thing that I notice is that around Tulane there aren’t really any major grocery stores, at least not very close by,” LaPorchia Collins, professor of practice in the Economics Department whose research focuses on food insecurity in the U.S., said. “… I would imagine that it is more difficult to get access to those things outside of what’s offered in the cafeteria, for example. There are at least drug stores that may have some food options, perhaps not necessarily the best options, and there are more restaurants here.”

Tulane’s situation, however, is different compared to other low-access areas of the city, such as Hollygrove, the Lower Ninth Ward and New Orleans East. Tulane’s location near the Garden District, which as a tourist area and a location of high socio-economic standing, puts it in proximity to expensive restaurants and grocery stores. While there may be some restaurants that are more affordable for students, the options are limited.

As a wealthier area of New Orleans, Uptown naturally attracts more high-end grocery stores and fresh markets than other areas. Though Tulane students, as well as people living in low-income neighborhoods nearby, have physical proximity to these food outlets, barriers like price and transportation make this food inaccessible.

“Given the area that we are in, say Tulane, the neighborhoods that are lower income that are close by, that may not have access to these grocery stores, well they can walk, but they might not be able to afford it from a pricing perspective,” Collins said.

According to researchers like Nancy Mock, associate professor in the global community health and behavioral sciences, availability and accessibility are only part of the food security issue facing New Orleans. To resolve this problem, she says residents will need to actively shift their diets away from fast food consumption. According to Mock, low-income families were not historically prone to unhealthy diets.

“Foods like gumbo and jambalaya, those were poor people’s foods,” Mock said. “They could throw the leftovers in and cook something. So, historically people of low incomes and high incomes had pretty good diets. In modern times, people get hooked on junk foods and highly processed foods.”

Organizations like Liberty’s Kitchen and the Goldring Center for Culinary Medicine have been established to address this issue. Liberty’s Kitchen seeks to provide nutritious foods to New Orleans youth and to educate them on healthful food preparation in the process. Every day it provides roughly 4,000 free, nutritious meals to low-income youth in New Orleans.

The Goldring Center for Culinary Medicine is a Tulane-affiliated program which offers a variety of nutrition-related programming, including free food preparation classes. According to Leah Sarris, the director of operations and professional chef at the Goldring Center, providing the general public with these lessons has become increasingly important in recent years.

“People don’t necessarily get home ec anymore, and they aren’t necessarily learning it at home,” Sarris said. “They have to learn somewhere. We can’t just tell them what to eat, we also have to teach them to make it, and that is essentially what we’re doing here in a way that is portable and accessible.”

Tulane students have also played a role in combatting food insecurity. Sam Heyman, a Tulane alumnus who graduated in 2016, co-founded Top Box Foods with other Tulane students. By purchasing fresh fruits and vegetables in bulk, Top Box is able to sell produce to individual consumers and convenience stores at a price 50-60 percent lower than grocery store prices. Consequently, quality food is made available to consumers who would otherwise be forced to choose less healthful meals.

We had an incredible time boothing at the Delachaise community health fair today! We're all marching towards health!! pic.twitter.com/YnqTAu5shW

“Another store that Tulane students can access is the Boot Store,” Heyman said. “They actually sell fresh-cut fruit which is provided by our program. Any time a Tulane students buys any of our products, they are helping a food access initiative.”

According to research that Collins has done on food access across the nation, the introduction of urban farming and farmers markets could bring more benefits than placing a grocery store in low-income neighborhoods. Collins explained that community gardens and farmers markets create few options for unhealthy foods, while grocery stores tend to carry unhealthy foods which people can be drawn to due to poor nutritional education or a perception of lower pricing.

Tulane Hillel hosts the Green Wave Community Market, at which students can purchase a variety of goods, including fresh fruits and vegetables. Access to farmers markets, however, has recently declined in New Orleans as markets like Hollygrove Market have been forced to suspend operation.

Some of the community gardens currently operating in New Orleans, such as Gro Dat Youth Organization, seek to play a dual role in their communities. Gro Dat offers a leadership program for youth across New Orleans which cultivates young leaders and more than 10,000 pounds of fresh food annually.

When students choose which organizations to invest their time in, Heyman recommends volunteering with organizations like Top Box’s partner, Propellor, an organization that “grows and supports entrepreneurs to tackle social and environmental disparities.”

According to USG Director of Sustainability John Alexander, the first step is to get informed before you get involved, as simply learning the facts can have a serious impact on food insecurity in New Orleans.