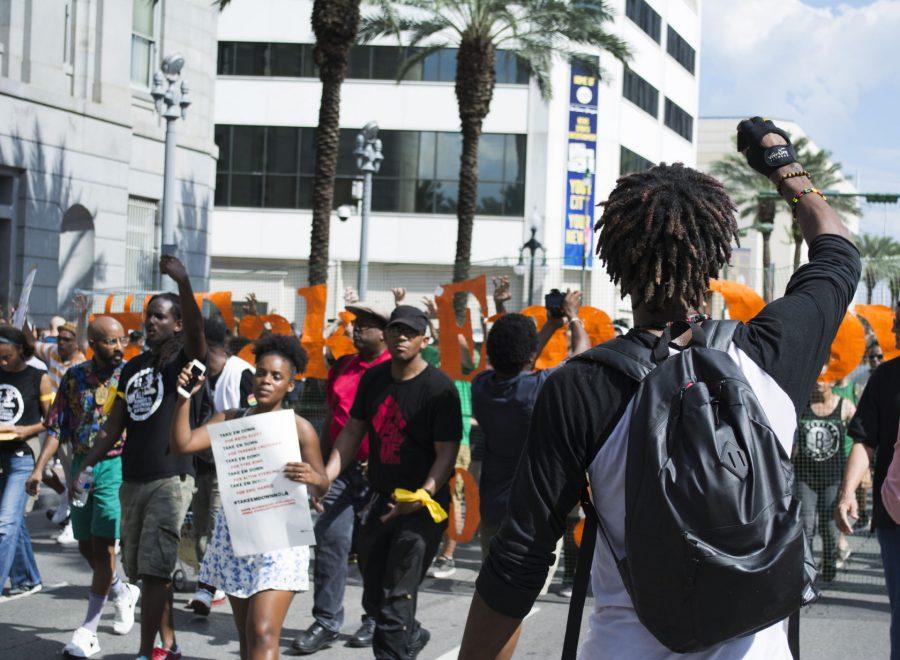 Instead of preparing for a tailgate this Saturday, a group of approximately 50 Tulane students marched through the streets of New Orleans alongside community organizers from Take ‘Em Down NOLA, protesting the Confederate monuments erected throughout the city.

At 1 p.m. on Saturday, over 200 people gathered in Congo Square to march to Jackson Square in protest of statues in the city of New Orleans which many believe represent white supremacy. Take ‘Em Down NOLA —a group dedicated to the removal of these monuments — organized the march over the past month through community forums and social media.

During Take ‘Em Down NOLA’s community forum on Aug. 17, organizers discussed bringing chains and attempting to remove the Andrew Jackson statue by force.

“We know who the organizers [of Take ‘Em Down NOLA] are we’re very familiar with them,” Superintendent of New Orleans Police Department Michael Harrison said in an interview with The Advocate. “We’ve prepared a plan to make sure they have the space to exercise that first amendment right uninterrupted. We will not allow anyone to destroy or defame anybody’s property and we will take necessary action to prevent it.”

Sophomore Sam Barton, the student liaison between Take ‘Em Down NOLA and the Tulane community, was with informing Tulane activists about the rally and mobilizing students to Congo Square for the event. Members from Tulane Black Student Union, Students Organizing Against Racism, Amnesty International, Divest and Feminist Alliance for Students at Tulane were among those contacted by Barton.

Take ‘Em Down NOLA’s main demand is the removal of Confederate statues, including the Robert E. Lee monument at Lee Circle, the General P.G.T. Beauregard statue at City Park, the Jefferson Davis monument in Mid-City and the Liberty Monument in the Central Business District along with other statues in the French Quarter including the Andrew Jackson monument in Jackson Square.

At approximately 2 p.m. the march reached Jackson Square, where NOPD had set up a police barricade with officers both on foot and horseback. 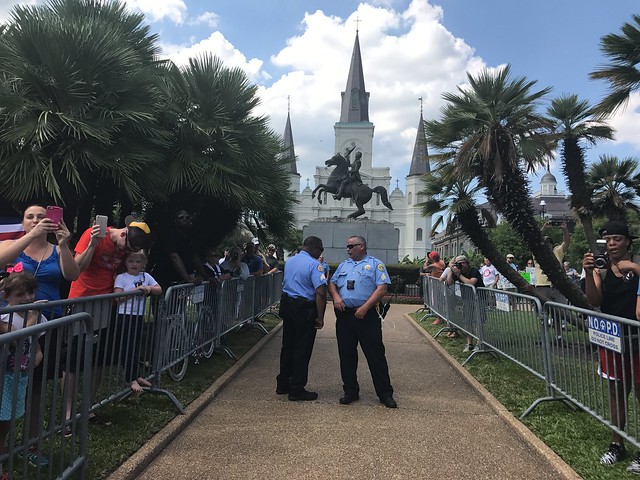 Former Knights of the Ku Klux Klan grand wizard and current U.S. Senate candidate David Duke held a small counter protest, which led to a confrontation before the counter protest group left Jackson Square. Seven protesters were arrested during the course of the protest in Jackson Square. Six protesters were booked for disturbing the peace, and one for illegal carry of a weapon which was later identified as a box cutter.

Barton said he felt that the altercation between the members of Duke’s counter protest and the Take ‘Em Down NOLA crowd was indicative of the white supremacy symbolized in the monuments.

“I also thought it was really telling that David Duke and a small army of white supremacists came to protect these monuments,” Barton said. “A lot of people say that Andrew Jackson has nothing to do with white supremacy: well clearly a former Grand Wizard of the [KKK] and his supporters disagree.”

Chants of “We can’t get no satisfaction till they take down Andrew Jackson” could be heard throughout the march. Take ‘Em Down NOLA organizers said these statues are tied historically to the Confederacy and racial themes of white supremacy. Andrew Jackson was the seventh President of the United States, and is widely considered as the forefather of the modern Democratic party.

“There are more people that visit that statue than any other in this city, and so especially given that he was a slave owner and the architect of the Trail of Tears that murdered more than 5,000 native people, we think [Andrew Jackson] is not deserving of any place of respect,” Malcolm Suber of Take ‘Em Down Nola said in an interview with WGNO-TV.

The Andrew Jackson statue was not one of the four voted on for removal by the city council earlier this year.

Around 2:45 p.m. protesters began to regroup and head down Decatur Street, back to Congo Square. Seven people were arrested during the course of the protest, most occurring at Jackson Square. The protest concluded around 4 p.m. after organizers said closing remarks to the crowd. 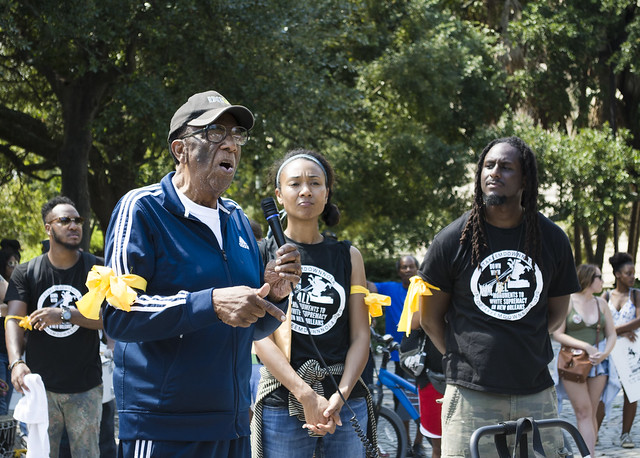 “If our children do not know we fought against oppression, they will believe we are supposed to comply to oppression,”one organizer from Take ‘Em Down NOLA said to the crowd. “It’s time for a change, y’all.”

One of the activists, Caroline Lutkewitte, founder of Feminist Alliance of Students at Tulane, said she feels it is important for more Tulane students to be engaged with issues that affect the New Orleans community.

“So everyone talks about this Tulane bubble, and now being a senior I can say it is very real,” Lutkewitte said. “I think that the bubble goes beyond just our social sphere, but also us as human beings and our interactions with actual New Orleans locals. It is really important to not only physically get off Tulane’s campus, but in a thought perspective as well.”